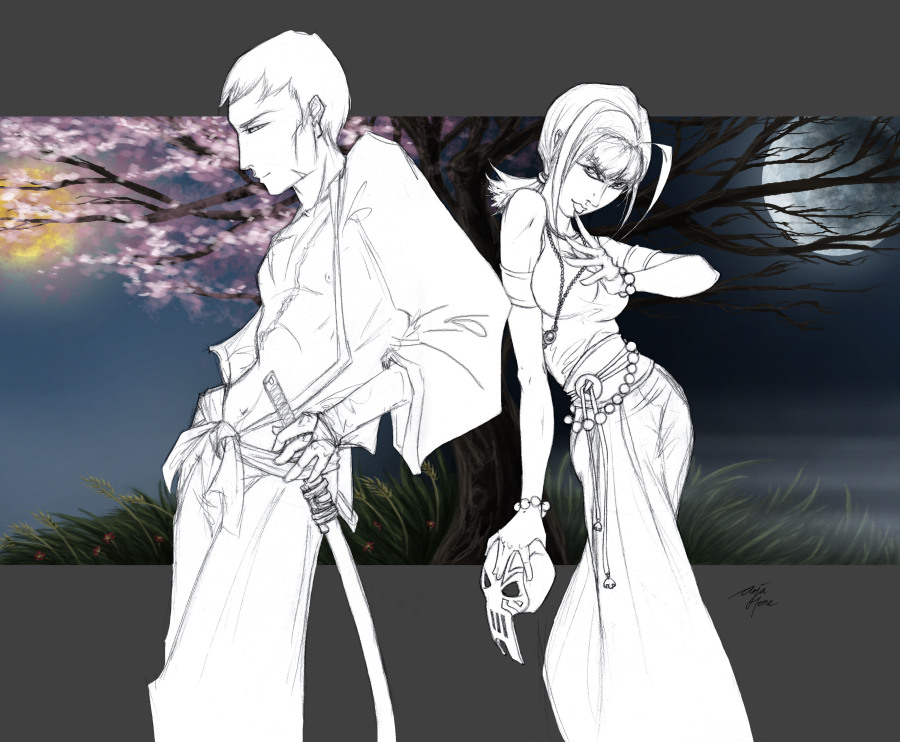 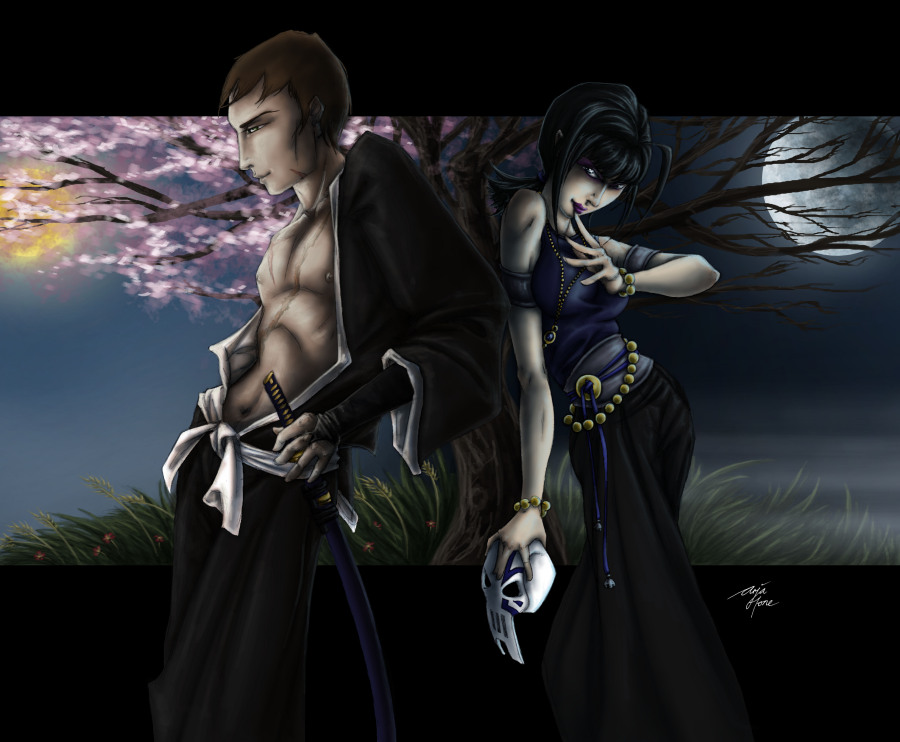 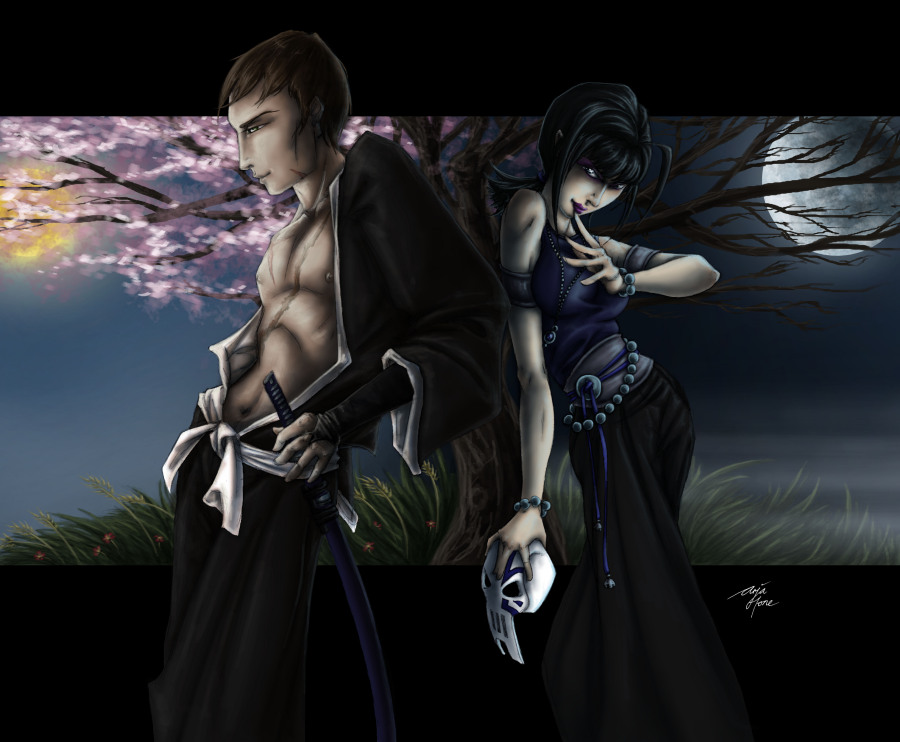 What I was thinking was on one half of the image would be Anrak, dressed in the typical black uniform of a shinigami, the only extra item he's added to his uniform are a pair of light brown leather tekkou armguards (http://blog.sette.jp/images/tekkou.jpg minus the beads). Despite being almost 200, spirit beings age very slowly, so Anrak appears to be around 23, 5 foot 10 inches tall, short brown hair, dark blue eyes, and a very *light* tan from a hundred years' worth of wandering. He has a scar about an inch long on his jawline, and I imagine his uniform top being open just enough to reveal a few scars underneath on his chest, uncluding a two-inch wide diagonal burn that would stretch hip to shoulder. His zanpakuto takes the physical form of a katana, and he wears it on his left hip. The scabbard and cord around the hilt are a deep midnight blue, with a black hilt underneath the cord. The guard looks like http://www.swordsoftheeast.com/ProductImages/hanwei/paul-chen-great-wave... and I see him maybe idly resting one hand on the hilt, his expression suggesting he's either enjoying the peaceful breeze and tranquility of his enviroment (will get to the background later), or thinking about his friends/girlfriend back in town.

On the other side of the image is how the spirit of his zanpakuto looks; Kage Shitsukoi (Unrelenting Shadow), Kagi, takes the form of a slender young woman who is a little pale, but cute. She stands about 5 foot 7, shoulder length black hair kept tied into a ponytail, and bright, vibrant blue eyes. She is usually seen wearing black hakama pants, and either a black or deep midnight blue tank top. Words used to describe her are "aggressive, sadistic, twisted, and morbid," and Anrak often refers to her as being "creepy." I see her with arms folded across her chest or stomach, a devilish smile on her face that's borderline evil; maybe she's hiding yet another secret from her master, maybe she's thinking about the next battle, or maybe she's wishing harm upon Anrak's friends, particularly his girlfriend.

In one of her hands, she holds a white, bone-like Hollow mask resembling the General Greivous helmet (http://web.ukonline.co.uk/bingo275/sideshow/SSC%20grievous%20SirSteve1.j...), minus the fin-thingies on the side. Hollow masks typically have a simple design painted on them (examples http://bleach.wikia.com/wiki/File:Ichigo%27s_New_Hollow_Mask.jpg or http://bleach.wikia.com/wiki/File:Ichigo_Masked.jpg) It would be your descretion of a design since I never specified one in the story, though the paint would likely be either the black or deep blue.

The background image for Anrak is his favorite spot to visit; a grouping of six sakura trees arranged in a circle out in a clearing in the woods, with a seventh placed in the center. He and his sister planted these trees a century ago, after she stole them from the Kuchiki Estate, but still... They're in bloom, and it's vibrant and beautiful, and you can see that he's at peace here. As the scene expands over to Kagi, it shifts...

Zanpaukto spirits dwell inside the minds of their masters, inside a unique "inner world" that reflects the shinigami and their personality. Anrak's inner world is (or was) the same little sakura garden, but Kagi has managed to twist and distort it into a perversion of it's true self. The bright, beautiful day has become an eternal night inside the inner world, with the only light coming from a full moon and it's bluish-white glow. All the trees are lifeless, with barren limbs clawing at the sky like a scene from a horror movie. The ground itself retains the only sign of life with a lush coating of grass...although sometimes Kagi's mood is such that a dense, low-lying black fog will appear and obscure the grass from view.

Looks great so far, Mercy! Especially liking Kagi's look and the way her face and eyes suggest that she's a wicked one.

The Winter War was my return to writing after about five or six years of doing nothing, and while a story based on Bleach was a radical departure from my norm, it was a fun diversion, and only the second story I've ever stuck with until the end (and the by far the longest); I started in early December last year and just finished this October, coming out to nearly 350 pages when I printed it off.

Thought Mercy might like a little break from Star Wars herself, and I'm very thankful she agreed to do this. Mercy, I cannot state enough how awesome you are. =D

Looking forward to seeing the rest of it!

Cheers man - glad you like so far!
And I do apologise for getting the request name wrong, I got a little confused for a mo...

Ooooooooh! STUNNING background, there... great visualisation of a GREAT idea from Seghast.

Dittos on the background. It is awesome.

Amazing job on the background, Mercy; it's simultaneously more beautiful and haunting than I could have hoped for!

Thanks Seghast!! I'm glad it's what you were wanting!
I'll make a start on the characters, now...

Love the background, and the characters Mercy.. they look awesome.

I've had a busy time this Christmas and we've also been away celebrating our 10 year anniversary in Marlborough (NZ wine country)!

Anyway, I've managed to finally find some time to work on this piece and I think it's about done.
Let me know what you think and if anything needs altering.
I'll load this to gallery on DeviantArt and add a link here as it's not strictly a Star Wars piece.

It looks awesome, Mercy, worth the wait! The background is perfect, Anrak looks good and relaxed, and I love how we can see some of the scars on his body to show that he's not had an easy time these past few decades, and Kagi looks just as she should; cute, yet wicked and almost-evil.

The only two things I would change would be making the gold bits on the katana a darker color, maybe dull silver or gray, and darkening the big scar across his chest just slightly; it's a permanant reminder to never underestimate anyone, least of all his own moody zanpaktou.

And congrats to both you and your husband on ten years! I didn't know it was this time of the year; honestly, having an anniversary heaped on top of Christmas and New Years would drive me absolutely bonkers!

Cheers! Glad you like!
I'll see what I can do about those updates - if you're wanting the gold changed on the sword to another colour then I would also want to change the gold on Kage as well since her colouring mimics the colouring on the sword.
Will get back to you with an updated picture soon, k?
~ M

No rush, though; sounds like you've had a busy few weeks and I couldn't blame you at all for taking a break and saying "eh, maybe later, when I'm not pooped."

Okay! Update done, I've also re-done his hair and I like it a bit more!
If all good I will load it to DA and put up a link.

Perfect, Mercy! I absolutely love it! Thank you so much for doing this piece for me! =D

After you upload it to DA, I'll go back and add a link to the pic in my Epilogue for my readers, and also as an author's note at the end of the next chapter for my current story, since Anrak has crossed over into it for a guest shot.

Thanks again, Mercy! It really is beautiful!