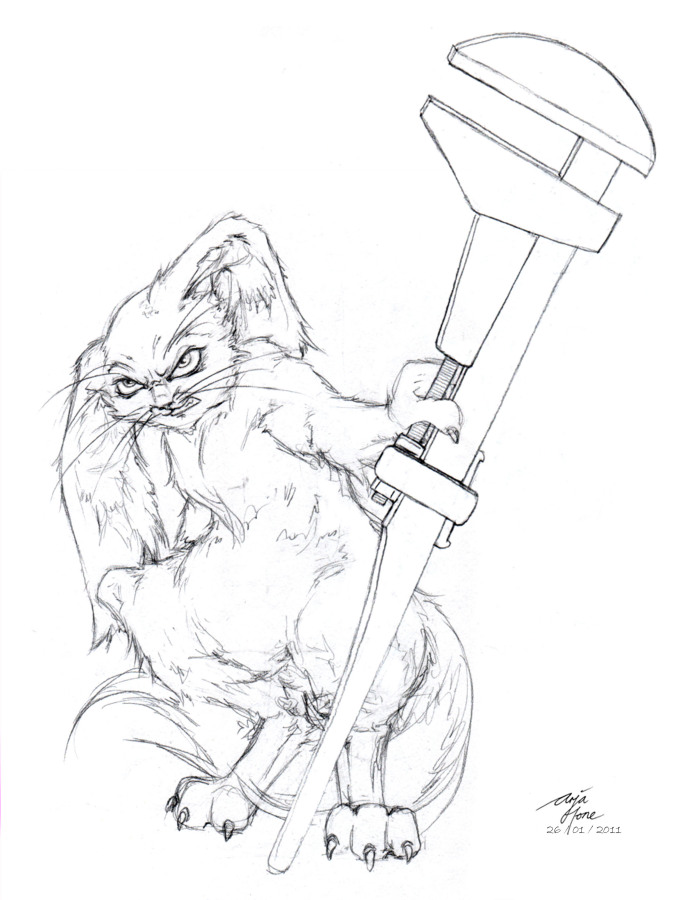 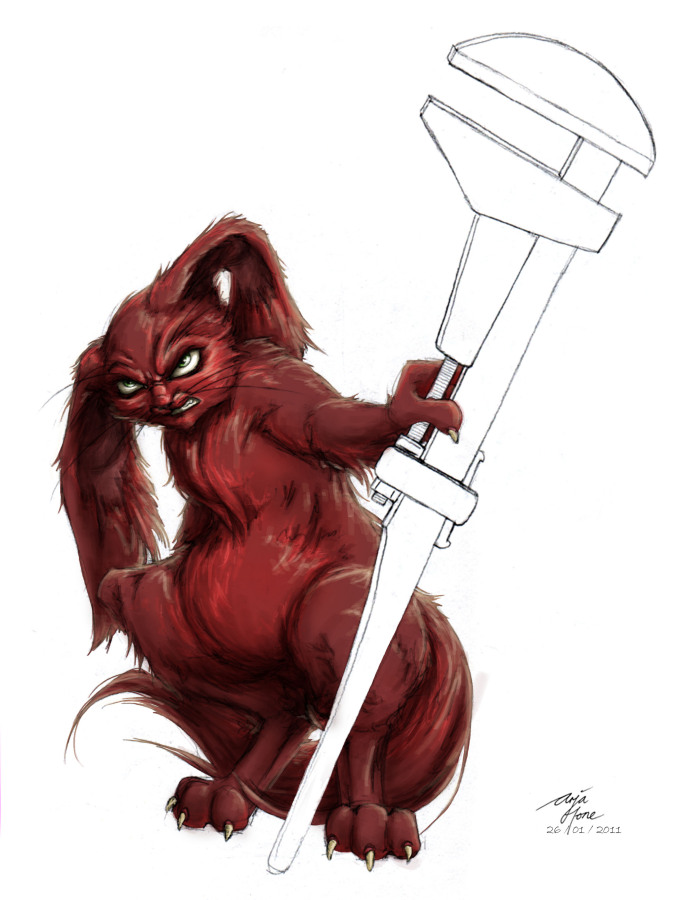 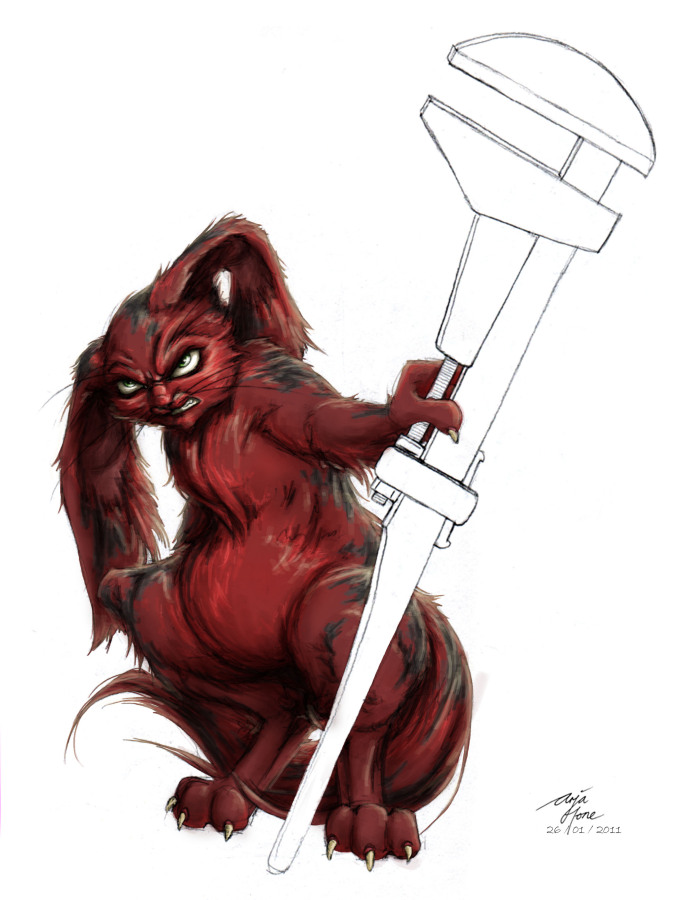 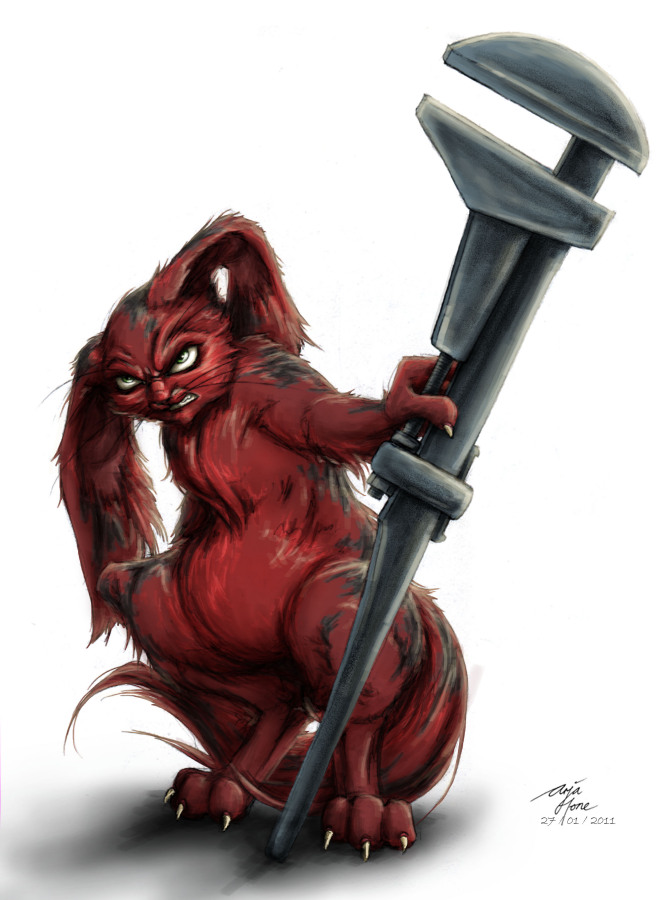 He has white fur, that splotches with black when he gets annoyed, which is fairly often. His eyes are blue and he stands @ a meter tall when he stands up on his hind legs. He is a mechanic, so he usually has tools in hand. But since he is so small, he has a droid that acts as a mobile toolbox. It is a hovering droid that houses a number of interesting items inside it's hull. But the main reason I would like to see Jikirt done is that he has the foulest mouth of any of my characters.

Think the oldest, most grizzled and foul mouthed veteran you have ever met, and then make him a half meter long with long ears and a bushy tail. THAT is Jikirt.

Oh, and he has to have a long wrench, one twice his length, in hand. And this is why. (About halfway down :D )

Heh! Glad you like!
Done most of the colour for Jikrit - will load now...

He has white fur, that splotches with black when he gets annoyed

hehe I was thinking the same thing :-p looks....Rusty...unless he's supposed to be really REALLY annoyed? :-p ((Besides the point Rusty is a cute color))

Hey guys!
Based the colouring on the chunk of story that was sent to me...

"At least they warned us this kraking time." Jikirt relaxed a bit. his tail smoothed back to normal size and his ears relaxed back to their normal posture. "We just don't have enough borking people. And most of the time, we cover what we frakking can, and try and fix what we can as we fargling can." He folded his vibroblade and stowed it. "Maybe with your assistance..." he broke off as another voice came.

"Do we need assistance?" he reached into his toolkit and pulled out a wrench. The wrench was a meter long, twice his length. He hefted it like a two handed sword. "DO WE NEED FRELLING ASSISTANCE?" He charged the droid and swung his weapon.

"WE. NEED . STUPID. OSIK. FOR. BRAIN. DROIDS. TO. DO. THEIR. JOBS." With each word he hit the droid again. Loud clangs echoed down the corridor as he pummeled the droid. Finally after a massive overhand swing the droid collapsed in a shower of sparks. The berserk Kushiban hit the droid several more times before finally lowering the wrench and turning away. The droid tried to move away, trailing parts, but another blow threw it back to the deck. Jikirt turned back to Val. When he spoke again, it was in a calm voice and his fur shifted colors again, staying in red, showing he had calmed a little.

"We don't do droid repair." Without turning he hit it again.

Might have to blotch it with black a bit as well, maybe...

Why is it that I find something hopelessly endearing about an angry space rabbit that doesn't limit his curses to the SW universe? XD

Oh, totally!!
It doesn't matter how powerful, how brutal, or how incandescent with rage they get - Kushibans will always be space cat-rabbits...

Well.. I see no difference between the two.. but I am color blind :)

Oh true!!
I've mostly used a colour tint and a little definition - so I guess that's not surprising, darl...

Right, I think this one's about done!
I can still take the blotching out if I need to - will wait to hear back from Kalenath before posting to gallery, k?

I for one quite like what you've done with the splotching there! Adds more interest, and gives more of an idea that there's something 'going on' with the colours there...

Wow. There is a reason that his colleagues call him 'Bun' As in 'Bun-Bun' from Sluggy Freelance. You do NOT want this bunny angry with you. :P

Sorry I have been late, school is a PITA and snow mixed with school makes for interesting times. I did a 420 on the road yesterday. Luckily I didn't hit anything or anyone. Just scared myself spitless.

I like it, Mercy. I like it a lot. Kushiban fur changes color as their emotions change. So you can guess what he is feeling right then, huh?

The red fur means he is part happy/part mad. Which he is most of the time. He is ALWAYS annoyed. :) Me likey.

This is the kinda Companion that Zara Gra'tua would have if she hadn't used the force to convince a Bha'lir to follow and annoy her friend
http://forcejourney.wikidot.com/zara-gra-tua

Great! I will load him to Gallery, then!

Wow, I know the US had a bunch of snow, that that's ridiculous, man!! Glad you weren't hurt!