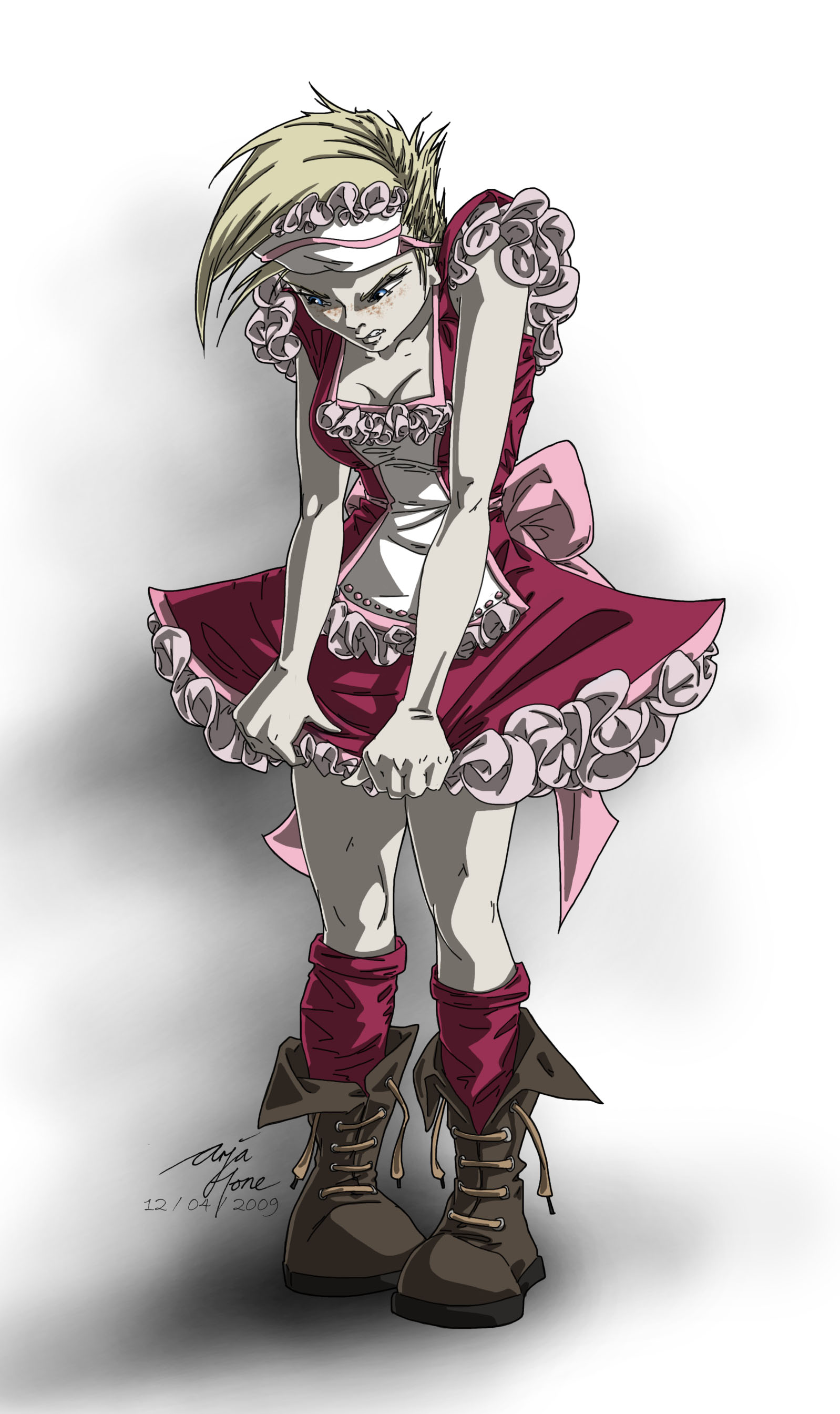 Cali - A Teenage Ex-Slave with a Bit of a Mean Streak!

Request by I. J. Thompson;

"Cali is a seventeen year-old human slave-girl (the domestic cooking-and-cleaning kind, not the dancing kind), who has very recently been rescued from servitude in Mos Eisley by our campaign's heroes. She has short, spiky blonde hair (to counteract Tatooine's heat), possibly some freckles, and is a bit on the thin side (though not emaciated). She's quite a tomboy, and though she's currently wearing a short, fancy dress that she stole from a shop on Ryloth, she's quite obviously out of place in such a garment.

Though young, Cali has displayed a bit of a vengeful, murderous streak, likely the result of her life of servitude. Though she is generally upbeat and likes to joke around, her anger can erupt in an instant. She's taken to carrying a fearsome-looking vibroblade, pilfered from the body of a slaver who tried to forcibly bring her back into 'the business'."

Read the original request, and a scene she is in, HERE!

You hit the nail of the head with this concept of her being out of place in such a dress. Great job.

Mercy, I just want to say that this picture has exceeded my wildest hopes in every way possible. The pink definitely does the trick - thank you for the last minute alteration! Also, I love how she's lit... though she's really cute, the semi-backlight totally underscores the darker elements/possibilities of this character.

If I may drone on for a moment, I'd just like to say I've learned a few things from watching your process on this. Like initially, I'd imagined in my head Cali wearing a dress that was sleeker, more cosmopolitan (though I never said so). I'm glad I didn't, because the dress that you've designed is better in absolutely every way! Because when I think about it, it makes perfect sense that an ex-slave from Tatooine, confronted with a whole shop full of garments to steal, would grab the frilliest, most 'fun' dress in the place. So, from your illustration, *I've* learned something new about the character!

Then, once the piece was coloured, I clued in that this is (or looks like) a spaced-out french maid's uniform (I know you told me that - please forgive, I have 'The Dumb' :P ). Anyway, I was a little worried about that, since she'd been pretty well-established as wearing the traditional Tatooine slave garb, and didn't get her dress until after being freed. But as I mentioned on the blog, it struck me that Cali would have *no idea* what a fancy maid's outfit would look like, and the hilarious irony that she chose one over everything else available is a really great character bit (and potential plot element) that I never would have dreamed of in a thousand years!

So, our story just got a little better, because of your work. :)

If anybody's still reading this, I'm amazed. But I guess what I'm trying to say is, the artists of SWAG in general (and Mercy in particular) are not only supremely talented illustrators who can bring your character ideas to life, but their creativity goes far beyond the realm of illustration, and if given license to make a piece their own, they can turn a good character into a GREAT one.

Thank you Mercy, and bravo, SWAG!

I really like the coloring and the highlights/shading in this one. Great job Mercy!

Thanks everybody!
I am really pleased with this one too, if I do say so myself!

And I'm so glad, Mr. Thompson, that the picture's been so useful to you! (I love the write up you have on the Wiki page, bu the way!) I'm a big bunch o' dopey smiles now!!

Great one Mercy! <3 She looks EXACTLY like the description (good).