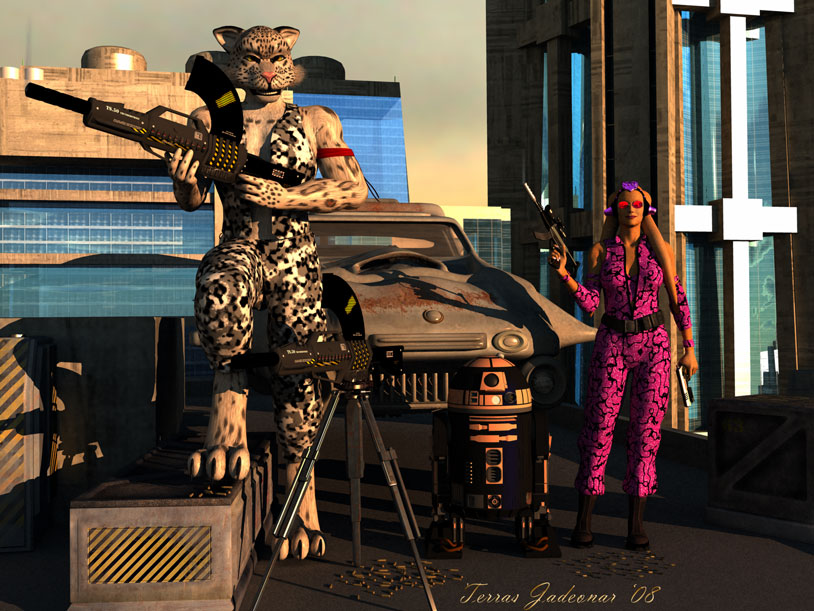 Well, thats the project codename working title... I did this recently for a good friend of mine Jay "johnnyputrid" Main, for a project he's been working on, soon to be released as a ... I'd better say no more. Just be on the lookout for a fanbook in the near future in the d20 section of the SWRPGNetwork Holonet forums!

Since I can't talk about the project details, I can talk a bit about this image.

Theres something about a sunset that I like. Maybe its the orangey-hue that color tints everything in sight.

The big guy, "Levrr" the Snow Leopard Togorian, he's kinda on the short side for their male species, he's 2.6m out of a possible 3.2m height. Even Wookies have to cran their necks to look up at a full sized Togorian! Maybe he's a sub-species of Togorians. Otherwise I guess we can call him 'Shorty'. If anyone got the Rambo impression, your probably right. Its gotta be the armband and the camo clothes right? Couldn't be that massively muscular build of his...nah... Btw, checkout his natural weapons - freaking 6" sized claws...

"Missy", the orange skinned Twi'lek in fashionable camoflauge, purple & hot pink are her favorite colors. Besides, with her big Togorian friend, who's gonna argue about fashion sense or proper camo anyways, right? The camo pattern is actually a 3 color pattern of my own custom shader design, the main color is a bright purple, with black and light pink 'drizzle' pattern. Kinda looks more like hot chocolate drizzled on Cloud City Cotten Candy Icecream don't it? If the camo dosn't hide her very well, at least it makes her look yummy!

"Smokey" Their R2 Astromech, sports a black & orange paintjob. If its not Missy attracting trouble, its Smokey causing chaos (and Levrr bailing them out or backing them up). His best and worst merits are mouthing off and slicing. Some would argue he's got worse attitude than the Togorian on a bad hair day. Smokey's got a penchant for snooping into video-feeds - the dirtier the better when he should be slicing for useful information, to Missy's annoyance. Neither Levrr or Missy don't know when or where Smokey picked up this filthy habit, or what he does with it. Missy routinely runs a bug-sweep in her room and especially in their shared accommodations refresher unit- just to make sure she's not being snooped on.

That is remarkable. I can't imagine how much time went into creating it.

One slight criticism, and that's directed at the folks who designed Levrr's weapons: with the magazines being on top like that, sights (both open and optical) would be useless, unless mounted on the side, which doesn't seem to be the case.

Your comments are appreciated, and the criticism welcome! I didn't try counting the hours that went into making this. I'm still learning this program (since March 2008 when I bought it). This program has the power and capability to make any 3d model into a photo-realistic finished picture. When I had set out to tackle this concept, I had set my personal bar fairly high, and didn't give up until I felt I had reached as close as I could to photo-realism.

Admittedly, the 2 hardest things and the most time consuming aspects of setting this scene for render was:
1. The lighting. I probably spent several evenings toying, tinkering, adjusting, and pumping out sample quality test renders (which is the only way to visually find out). I was going for that "certain" evening sunset look, that golden orangey that we get sometimes. The first time I achieved the effect, it wasn't proper as I had 1 too many light sources happening to make that effect, and it was casting ghost shadows that shouldn't be there. So it was literally back to the drawing board, using only 1 light source, which was the setting sun... The program wasn't wanting to be co-operative either. For the most part it was trial & error, and then hit & miss. Make a slight adjustment or two, then hit the render button. couple minutes later, the sample is done and then try again. The interesting thing is, with a few adjustments of the settings, I did reach high-sun mid-afternoon level of daylight.

2. The building windows. The default city block model had basic dark textures for the windows. Which sometimes is fine in daytime. The other problem is that the windows weren't reflective. Made the buildings look like they had mortar brick siding than office windows. So, it was a fun trivial process of using the programs 'shaders' to keep / use the supplied window textures, but at the same time change their property values to make them as you see now. There was about 3 or 4 actual sets of windows textures to adjust.

The gun for Levrr was a freebie model, made by BarCode. Its the actual default model size, and is probably comparable to a .50Cal Browning machine gun in size. It was either using this or a gattling gun or some bazooka or rpg large sized weapon type for the Togorian. I didn't have any E-webs on hand at the moment either, and then again, the running theme is slugthrower / projectile based weaponry. But your totally right about the magazine being top mounted - doesn't offer much expanded usefulness. I think the model designer intended the weapon to be sort of a fantasy hero soldier aka Duke Nuke'm (or insert Marvel Super Hero/Villain character name here)to be wielded 1 or 2 handed as if it were a regular sized machine gun or blaster rifle. Also, weapons that size and calibre have larger ammunition shells, so a box / belt ammo feed would be more practical than a magazine.

For Togorian RPG species stats, the Males - they're 'Large' sized for category (up to 3.2m height tall), and this heavy machine gun is also Large sized. Game stat wise- that'd put them on a 1:1 ratio, being able to wield the weapon single handedly, much like a human (medium size class) would use a blaster rifle (also medium size class).
______________________
Core to the Quad baby!!!

And there I was at our local Air Force museum this weekend, and in one of the WW2 displays was a Japanese type 99 machine gun... with the magazine on top just like the ones in your picture. So while I still think the design has problems, I can't say it's not historical!

check out the Bren gun:

Having a top-mounted magazine has one useful characteristic: You can have a long banana style magazine, and still lie down close to the ground, keeping a low silhouette.