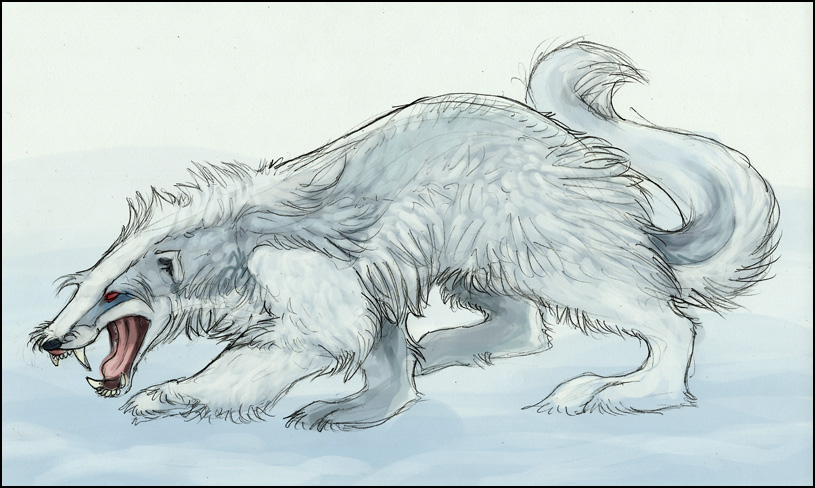 So, our party's hanging out on Csilla for the moment, but I can't find a single mention of any pre-established wildlife on the planet. Rather than take this to mean there isn't any, we've invented some, because, well, what's the fun of tromping around on the surface of a glacier riddled ice planet if there's no snow creatures to encounter?

This thing's definitely a top level predator, I've basically imagined a badger that's evolved under the same pressures as a polar bear. So it's... it's big, maybe equal in mass to a polar bear, but stretched out over a (comparatively) longer, leaner, quicker body. Its feet are huge, to better spread its body weight over the surface of the snow, and entirely covered with fur- no paw pads. Its claws are retractable, keeping them razor sharp; it prefers to stalk, leap, and grip onto its prey in a cat-like style rather than doggedly pursue to the point of exhaustion.

Oh my god I want one!

It would probably eat my face but I want one!

Actually Tusserk, would you mind if I used this in my campaign? I'm tempted to have Asha take the Last Outlaw to Csilla just to meet one of these guys.

I'd kind of like to see him fight one :D

By all means, go nuts with it! :D I'd be a little bit chuffed to see this guy end up in another campaign, haha.

The species doesn't have a name yet, mainly I guess 'cause we haven't needed to in-game... it was encountered by just a couple of us out in the wilderness, with no locals to clue us in. "Giant weasel" and "polar-badger-thing" are about as close as we've gotten.

Or a Csilla Snow Stalker

You have such a good feel for animals, Tuss! Makes your created creatures seem so very real... Just amazing!

She works at a Zoo, so I would think her feel for animals comes only natural to her creations.

Love it.. I bet he waddles like a skunk. I highly recommend getting drunk and watching a De-scented skunk take a flight of stairs.

Ooooohhh. Aren't you just the cutest little death-weasel? Yes, you are.

Just out of plain curiosity... What kind of stats are you giving these guy's?

Actually at this stage we're using them mostly in a narrative/skill challenge sense, and haven't fought a beast 'encounter' style. If we had, I imagine our GM would just find a pre-existing critter along a similar vein, re-skin, and add a few embellishments, haha. I could probably convince him to create an actual set of stats specifically for this critter (or others) though, if folk would be keen for 'em!