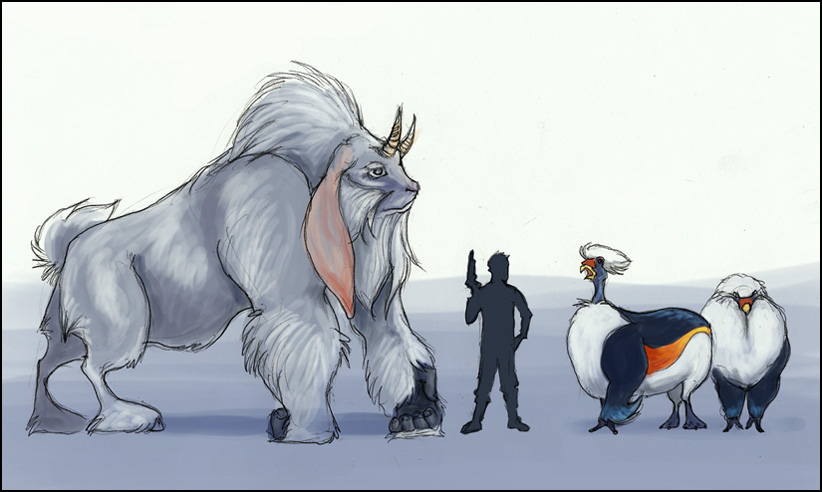 Aaaand a couple more herbivores from the glacial wilds of Csilla!

On the left is the Csillan Snowhare, a massive beast evolved from small, flighty animals whose main defence is its sheer size and imposing manner. They're actually pretty terrible fighters, lacking any real aggressive instincts, and have a profound preference to a flight response; they will always run if given an option. The best way to bring one down is to surround it or back it into a corner, and force it to defend itself.

Their ears lack the blueish cast typically seen in the skin of native Csillan creatures; this is because they are critical to the animals' temperature control. Prone to over-exertion, the snowhare requires a rapid method of cooling its system after a chase, and exhausted snowhares are often seen laying in the snow with their ears splayed either side of their heads, cooling their blood which flows incredibly close to the skin in may large vessels. Predators skilled at hunting snowhares often learn to rid the animals of their ears at any chance, thus increasing the odds that the hare will collapse from heat exhaustion and make for an easy kill.

They are solitary, but not territorial; several individuals will happily exist within the same range, but they are not dependent on each other. Both bucks and does will grow horns and beards, but the beard is far less impressive on the females of the species. Generally credited as a herbivore, the snowhare is actually a dietary omnivore and opportunistic feeder, just as happy peeling lichens and algae as tugging lemmets from the shoreline with their prodigious strength.

On the right, we see the Scherp. Generally credited with being extremely stupid, mindless creatures ("..stop being such a scherp!" being a common insult to locals), Scherp are actually smarter than they look. It's just a different sort of intelligence, perfected for herd living. Not particularly strong or fleet of foot, the scherp's major defence is its dependence on its flock; and these are vast, commonly numbering in the hundreds. A lone scherp is easy prey, one separated from its flock is almost certainly doomed.

Hunted to the brink of extinction for their warm, waterproof and rather striking pelts, nowadays the scherp is an endangered species and has full protection from the law. Most known flocks are monitored against poachers, but their pelt will fetch an outstanding price on the black market.

The snowhare is definitely my favourite so far.