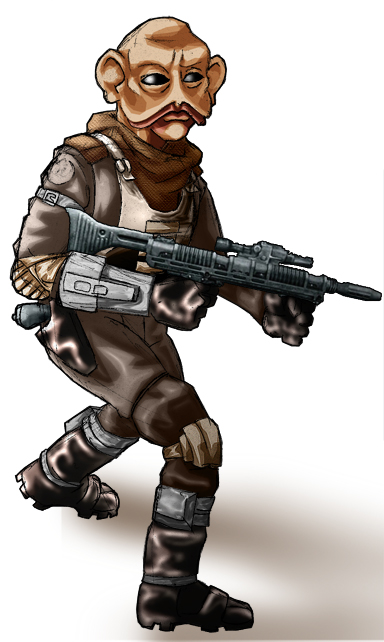 Dost Brumb is a persona my Clawdite Jedi Master assumed to trail (and come to the rescue of) one of the Jedi in our group who went AWOL. Seeing as how I would be playing the character in this disguise for some time, I came up with a pretty elaborate back story for it:

"This salty old Sullustan earned his battle scars and bitter attitude in the Yuuzhan Vong invasion. He fought a good fight as a sergeant in the New Republic Special Forces, and even has a few notches in his DXR6 carbine to represent Vong warriors. Some infidel, eh?

"Later Dost found himself involved in the petty power grabs of New Republic politicians after Chief of State Fey’lya’s death. It was a slap in his jowly cheek, and Dost summarily ripped the New Republic patch off his shoulder in a clear act of 'retirement.'

"Now, tired and jaded, Dost wants to live out the remainder of his days quietly. He’s a receptacle of knowledge and wisdom, and will help in an idealistic cause, but won’t stick another finger in the pie of politics."