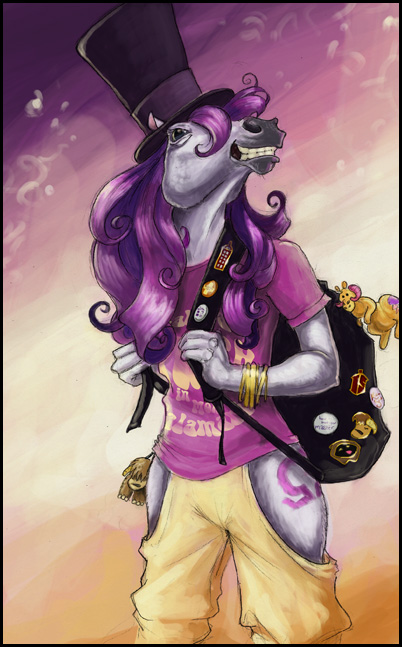 And the final PC in our group, from the guy who brought us many misadventures in our previous campaign through the loveable (note: term used loosely) Klopan. I almost kind of can't believe this is a thing that I've actually drawn. Equisha is a Thakwaash... but unlike most of her species, the various personalities that make up 'her' aren't exactly... at peace with one another. For the most part, she's a wide-eyed, adventurous, honest, naive, friend-making, pop-culture-loving teenager. Sometimes she's stuffy old Dr Edward 'Horse' Jones, with the skills of a surgeon but the attitude of a field medic. Sometimes she's Klopan, and Klopan doesn't like letting the other personalities come back. And every now and again a random new voice seems to come out, I don't know, there was this random gangster thug hanging out with us the other week. GM keeps letting her find things, and she keeps wearing them. She also has a bonnet.

all round awesome. That torso area and t shirt are to the tee ( shirt that is)

Tussy, perhaps we need to start calling you: "Ms. Awesome".

I love when you find the other spectrum of pwnage gamers. This is a player that needs no gm.

Still, she seems to be quite the lively character.

This drawing almost makes me not regret going ahead with this terrible character concept.