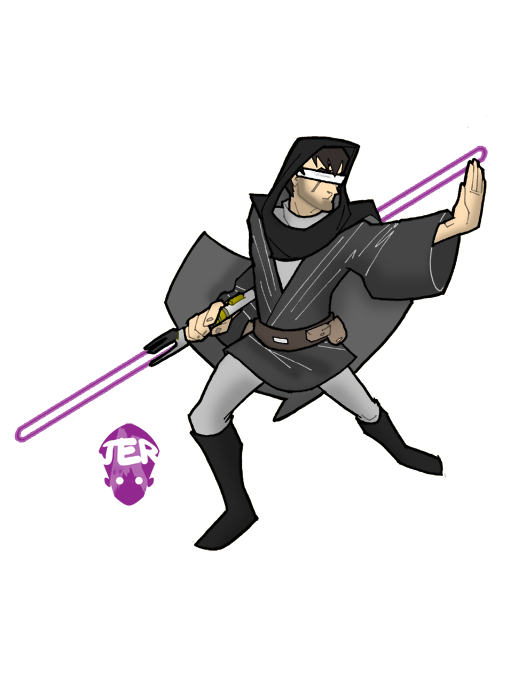 excellent description of the character. those are the kind of requests i love to take :)

Karrick is a Miraluka Gray Jedi who is also a highly decorated veteran of the Clone Wars. Shortly after he served in the Clone Wars he was noticed by the Jedi. They quickly drafted him into their ranks but he didn't feel right with some of the beliefs and teachings so he left the Jedi Order shortly before Order 66. He along with a few others survived the onslaught but not without paying a price Karrick was deeply scarred by what had happened to some of his comrades and the Jedi that showed such kindness to him. So he swore to himself no matter what cost that he would take his revenge.

Build: Athletic/Lean resembles that of a Football Quarterback

Eyes: A white cloth covering his eye sockets tied behind his head he also has a long scar going through his right eye

Clothing: He has black Jedi attire and is almost always wearing his hood to conceal his identity. He has a tactical belt and shiny black boots.

Lightsaber: His lightsaber is double bladed and has two deep purple blades that when ignited look much like flames. The hilt looks much like the top one in this picture.

Pose: Doesn't really matter as long as it looks like an agile fighting pose.

If you require any more detail or if you feel as if I have forgotten anything please don't hesitate to ask.

why thank you kyle :)