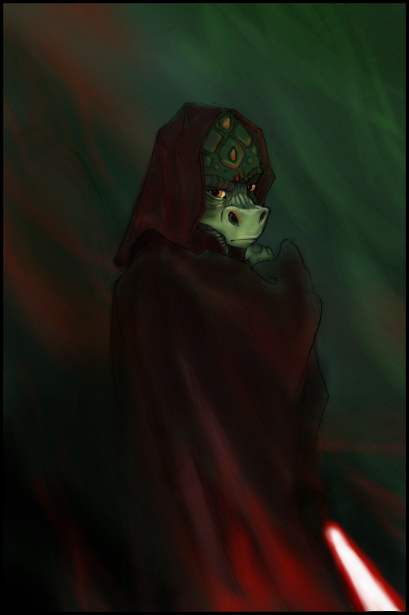 'I did it for the right reasons!'

Time to throw up another oldie!

For those who just care for the image, have a broody little Trandoshan Dark Jedi.

For those who care for the story behind it from my end, have a chunk of text to go with it!

Desperate to get at the information that he was positive Tusserk held, but getting nowhere with the more painful methods, Jerec eventually turned to bargaining again. Naturally, he offered Tusserk EVERYTHING in return for compliance; not just an end to the torture, the return of his connection to the Force and further instruction in Force usage (not that the latter particularly appealed)-- but also a brand new body, cloned and rapid grown (thanks, GM! I knew I could trust you not to ACTUALLY completely change my beloved character!), ready and waiting.

Briefly, Tusserk was actually quite sorely tempted, trying to convince himself that he could 'pretend' to accept Jerec's offer and then use his regained power to free himself.

Tusserk’s mind raged. Maybe. Maybe. Just maybe. In his own body, with the Force returned to him, he could be strong enough. He could take on Jerec. All he’d have to do would be to tell a few simple stories; stories that surely only Jerec would hear, knowledge that would die with him. He... he could wait, even. He could bide his time, he could pretend, hell, he could take whatever knowledge and power Jerec might offer, if he really was the Master he claimed to be... take it and use it against him, when the time was right. When he could be certain of a victory. Hell, he could take over this whole damned ship, now wouldn’t that be something to take on Vader and the damned kriffing Emperor with! He could do it. It wouldn’t be the first time in his life he’d had to pretend, and he made it out the other side of that. He was strong enough. Surely he was strong enough. Strong enough in his own body, with the power of the Force his ally once more; flowing through him, oh, how he yearned for it!

And Tusserk saw himself. Standing tall and fierce, in his own body, saber at the ready, positively brimming with power. Someone to be reckoned with. He knew that this is what he could be... standing at Jerec’s side. Tusserk’s stomach knotted up. He saw himself; he saw himself dark and hooded, his eyes so hard and cold, he saw his head hanging low. He saw himself, and began to burn with shame at what he saw.

“I’m sorry, Tusserk. I really am.” The voice whispered in Tusserk’s mind. “Believe me, I wish we lived in different times. Things could have worked out a lot better for the both of us.” The memory gained strength, and in Tusserk’s mind he was back on Alderaan, in the blissful comfort of his own home.

He remembered the day with great clarity. It had been bright and beautiful, but he wanted no part of it. He felt flat, hollow, wracked with grief. And the shame, oh the shame, eating away at him far more devastatingly than the shifting, clicking layer of beetles that he played unwilling host to. Kieran had been as kind about it as he possibly could, but that was little consolation.

“But Master...” that was his own voice, small and stricken, barely comprehending what he’d just been told. This was too much. Too much! Her funeral... her funeral had only been a few days ago, and now this, now this, all because of his stupid kriffing temper!? “Please...”

“This is for the best.” Kieran had held up a hand, placating. “For you and for me. Your emotions get the better of you, Tusserk. Now I know you’d never mean to hurt anyone you cared about... but the list of people who’ve hurt you is getting longer. Nobody would blame an ordinary person for reacting to what you’ve been through, but you know as well as I that a Jedi can not afford to. You know what happens.”

Tusserk cleched his teeth and his fists as he trembled at the table, that hideous sensation of utter failure and burning shame threatening to swallow him up.

“And I’m not going to take responsibility for the next Skywalker.”

Tusserk’s head swam, the words and memories spinning dizzyingly about his head.

“But who else is there to stop you turning to the Dark Side?” Trys. Oh, beautiful Trys.

They were on the Wordie, both still elated at having been reunited after so long, both still a little shaky in the aftermath of the mission they’d just completed with the Squad, both questioning what the future could possibly hold for them. And there was Trys, beautiful, wonderful, earnest Trys, tentatively putting voice to the greatest threat in Tusserk’s life. And the single threat he hadn’t even begun to acknowledge as a possibility.

Oh, it would try. It would always be there, threatening, tempting, hoping to claim him. It would smile at him, like the Dark Jedi who stood before him, beckoning, promising great things, promising an end to pain. Dark, Light, it might all just be the Force in the end... but he wasn’t at the end, not any more. And not in this life, not in any life, Tusserk realised with brilliant clarity, would there be a place for the Dark Side inside of him.

The body that Tusserk inhabited lifted her head. Her eyes were honest and open, and a thin, but thoroughly genuine smile crept along her lips. There was no malice, no anger, no thirst for vengeance in her expression. She looked at Jerec, and she started to laugh.

[Heh, going through all these old emails is making me so nostalgic for the game!! I still sometimes wonder what might have happened to the campaign if Tusserk had actually taken Jerec up on his offer.]

With my reading being somewhere between 15 and 20 words...I looked at the pic....Muwahahaha...evil wins!!! very nice stuff