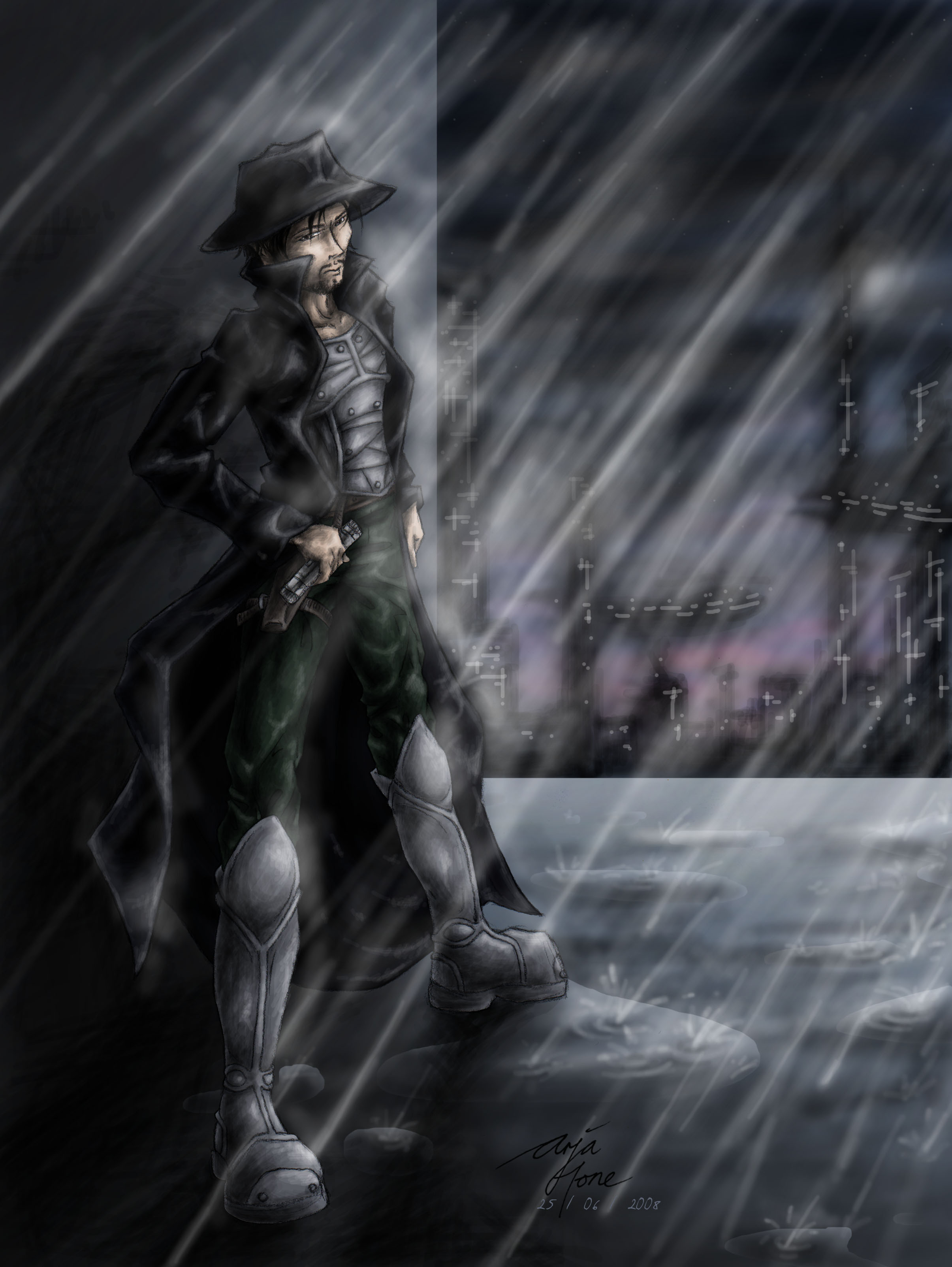 "Hello all, my friends and I are starting a new campaign soon, and I'd love to have a picture for my character. I'll be rolling a Jedi Investigator, and aside from a few requirements, you can take all the artistic liberties you want with this one. All I ask is that he 1. Have a goatee and black hair, and 2. Be wearing a trenchcoat and standing with a Coruscant/citysacape backdrop. Character-wise, I'm kind of modeling him after a Sherlock Holmes/Corran Horn-type character. High INT, WIS, CHA, that sort of thing, but he'll still be handy with his lightsaber. He doesn't really need to be in a combat pose, in fact the pose in the following picture was what I was really aiming for, aside from the fact that it's a Rodian: http://swagonline.net/node/3172"

The pic has turned out more 'Film Noir' than originally requested, and initially I wasn't very happy with it. But I got such a great response from people on the blog that I'll be posting it along with the other one I did for the same request.

Beware what awaits you in the darkness. It could be evil or it could be JUSTICE. Another great pic as always.

Pictures like these are a real treat since they don't come too often. Maybe I'm biased, but I do enjoy Film Noir style pieces. Kind of reminds me more of Max Payne in a Star Wars setting. Only thing is missing is some classic inner monologue text. So, heres a little something in Film Noir flavor:

"It was a dreary night as I peered around the building corner of 109th and Soma. The rain was belting down so thick like slabs of durracrete. I could've followed right behind him as I tracked my suspect- Louie The Snitch through the streets. Of all nights it had to be this night, if it wasn't for my trusty nerfhide trench coat I'd have been soaked thorough to the core. It had all started earlier this evening as I was on my way over, accepting an invitation to pay a visit to my client Mona Shteele when I saw Louie exiting her personal condo highrise landing pad. Interesting I thought, when I looked at my chronowatch, I had arrived ten minutes too early. What business did a weasel like Louie have with a classy dame like Mona? I wasn't sure what his connection was, but something told me where he was heading. There was too many loose pieces in this puzzle that didn't fit. Louie, Mona, Big Boss Zacrutch. And I didn't like it."

Oh my God! I love that! It's so sort of Maltese Falcon - you nailed it! Total Legend!!!

Your welcome, it was my pleasure ;)

If you wanted to & were inspired to, you actually could do a few more pieces along those lines, with shady & cliche named characters. With the Star Wars twist and a healthy imagination, you could make some really awesome companion pieces in Film Noir style :)

And to think, this was a piece you originally wasn't too pleased with and still managed to complete and upload :)

Once, a few years ago, I joined and played in a SW Film Noir style RPG game. Well, actually, I took on the role as an ex-cop, but I played him bringing in the Film Noir inner dialogue aspect. I totally loved it. Unfortunately the game didn't last before the campaign was done. I had contemplated doing some SW Fan Fiction writing, continuing that character's backstory adventures, ala classic Detective Film Noir... But such is things, I never did get around to it, save for my character's backstory that started it all. Thus writing the little piece above was most enjoyable to do.

I've read through your writing and I really like it. I'll have a go at a picture and load up a blog when I have a chance.