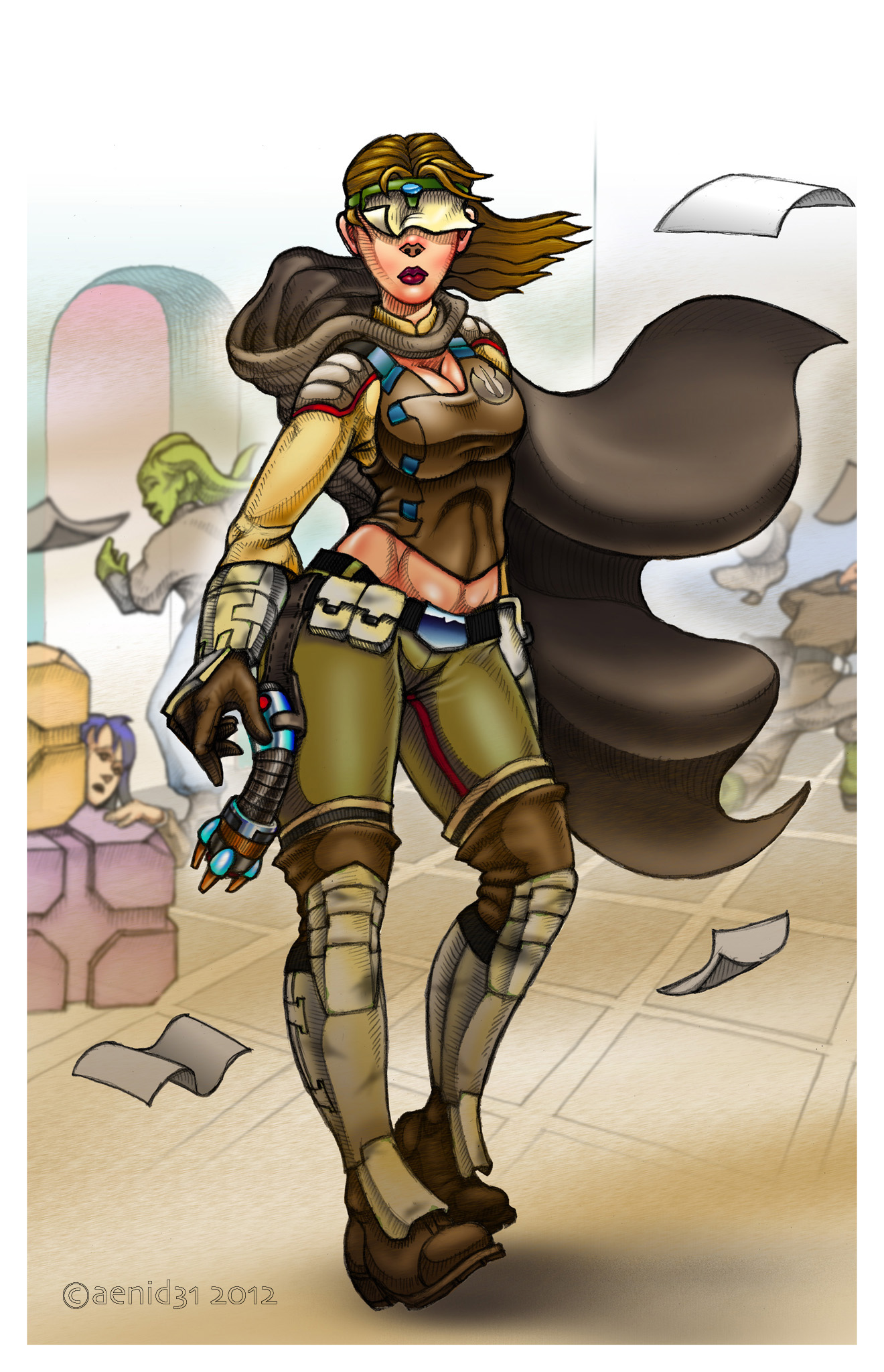 A request from StarFire for Kira Starr, a Guardian Miraluka Jedi. My short story follows: It was almost noon and my head was still pounding. Thats the last time I drink with a Chadra-Fan. I took a swallow of the concoction someone recommended and nearly gagged. I guess this vileness worked because the bitterness overwhelmed any cobwebs remaining from the hangover. It apparently had another effect by way of hallucination. Or was it the nastiness I tasted with that Chadra .. The table in front of me had a large, darkly cloaked figure that I was seeing double, except that it was vertical! I blinked a few times, and realized that it was a figure opposite him slowly levitating out of his chair and flailing his legs as he grasped his throat. His flailing resided and his body was thrown somewhere into the back to the sound of loud metal and smashing plates. The Cloaked figure remained seated and took a sip of something he was drinking. Sounds of chairs, running feet, spilling glasses. I took a hint and scuttled off quickly with the other patrons in case blasters or vibro blades came out. Taking cover behind some heavy containers, I saw the cloaked figure still seated. The Cafe was cleared and everyone was running away except for one cloaked figure walking slowly towards the cafe! A heavy unnatural wind wound up in the square and pulled the cloak bodily away from the walking figure. It showed a well sculpted female wearing greaves, part gauntlets and a cloth draping over her ey...good gods! a Miraluka!! She was weilding a slightly curved Makashi styled light saber on her hip as she approached, confidence in every step. I had a feeling this could be very, very bad. It was only via my own curiosity in the past that I knew this, having met a Jedi and picked her knowledge about fighting styles and lightsabers. Knowing the the Miraluka were very Force sensitive, I deduced that the dark cloaked figure was Sith. I saw the seated Sith slowly turn his head, and I flew! I flew as fast as my legs could carry me!

This is one of your best that I've seen to date.

Awesome! The outfit, curved lightsaber, and the Miraluka is well done. Keep up the good work.

This is a really nice piece! I just love the way it's put together as a whole.

you have a great style that is all your own.these are wonderful and playful pics.

I've been missing your style around here, Aenid. Looking slick as ever!