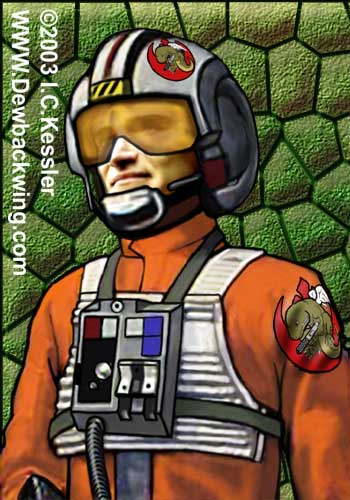 A generic rebel NPC pilot, brave, true... and doomed to die a horrible fiery death. Usually I do pilot pictures with helmets off but I left it on in this case to allow the face to be blandly obscured. You don't want too much character from a guy who's going to be laser-cannon fodder, do you? Poor bugger.
Based on a photo taken at the MOM exhibit by my brother Mike Kessler. The dummy the costume was on had a blank, black face so the face was added from a photo of my brother Mike Kessler, taken by me.
Background 'Dewback Scale' pattern is © Frank Bono, used with permission.