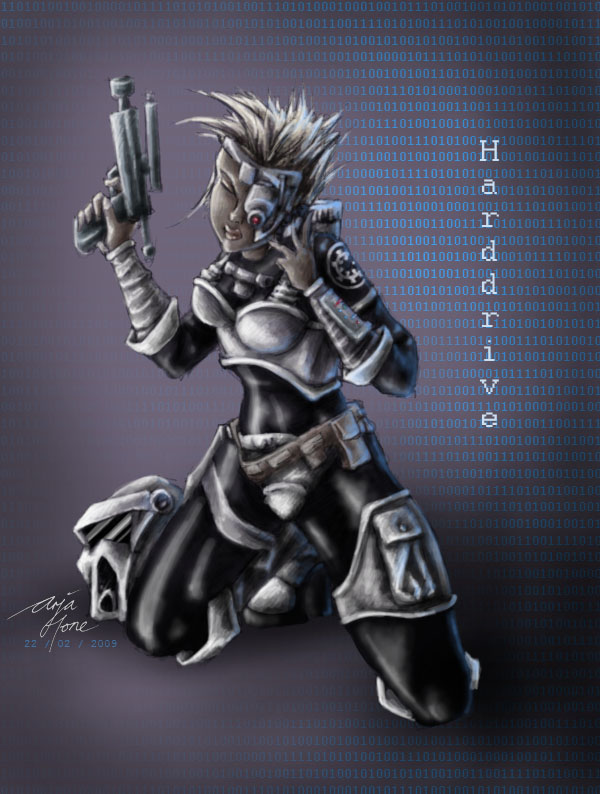 A request from Lord Crumb, who has furnished us with individual Bios for all three of the Clone Chicks;

When the Kaminoans were creating the Jango Fett clones for the Republic there was an accident with one batch of clones. Instead of being male clones as Jango they turned out to be female. The Kaminoan scientist wanted to terminate the batch but Jango convinced them otherwise. Jango decided that female versions of himself would be great at infiltration and assassination so he trained them in such techniques. The female clones were not activated until the second year of the Clone Wars. They were the best at what they did.

Slicer: RC-001101 (aka "Harddrive"). She was activated in the second year of the Clone Wars along with her Fett clone sisters. Throughout their training only a full company of female Fett clones survived. However, "Harddrive" was killed-in-action in the months prior to the end of the Clone Wars while her squad was attempted to hacked General Grievous computer network on his flagship the "Invisible Hand". She and her squad were personally killed by General Grievous. RC-001101 (aka "Harddrive") was very resourceful in her slicing abilities and in combat as well.

She is cool with all the tech gear and the tech background is a nice touch. She knows what to do and how to do it. Thanks again Mercy for making these characters more than just something in my mind.

Very cool, very slick. Like a feminine version of Solid Snake from the "Metal Gear"-series. Very nice background, too; the numbers give her the kind of slicer/commando-vibe her description entails.

DEFINETLY MY FAVORITE OF THE THREE.