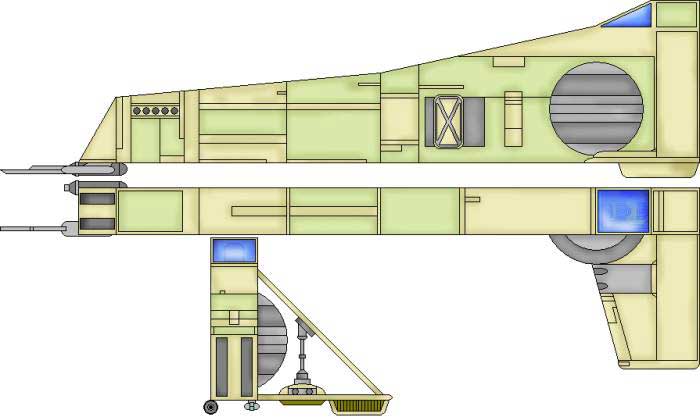 Well, although it's hardly worth doing a deckplan for a ship only 22.4 meters in length, with barely enough room inside to swing a Thesselian Micro-Cat, it was either do this, or discover someone making one using Troy Vigil's bizarrely and hugely inaccurate schematics instead of prime sources.

Whilst I'm at it, a brief note on how to construct a Slave II from a stock Pursuer.

A: Have a Pursuer suffer a serious hit on it's starboard wing, destroying it's second engine and twin medium laser cannon.
B: Have the damage serious enough to require the removal of the old spherical reactor, and the hulk sold as scrap.
C: Replace several systems with state of the art gizmos, including a smaller reactor.
D: Rip out the autochef, and replace with force cube cells.
E: Weld on an ion cannon and a torpedo launcher.
F: Fit twin ion engines into the rear of the access tunnel, which although makes the interior cramped, removes the need to replace the entire wing spar.
G: Convert the surviving thruster to produce power only, and run that into shields.

The only problem with Slave II is that without the landing gear housed in the starboard wing, the ship can only rest on it's repulsors.
See Deckplan