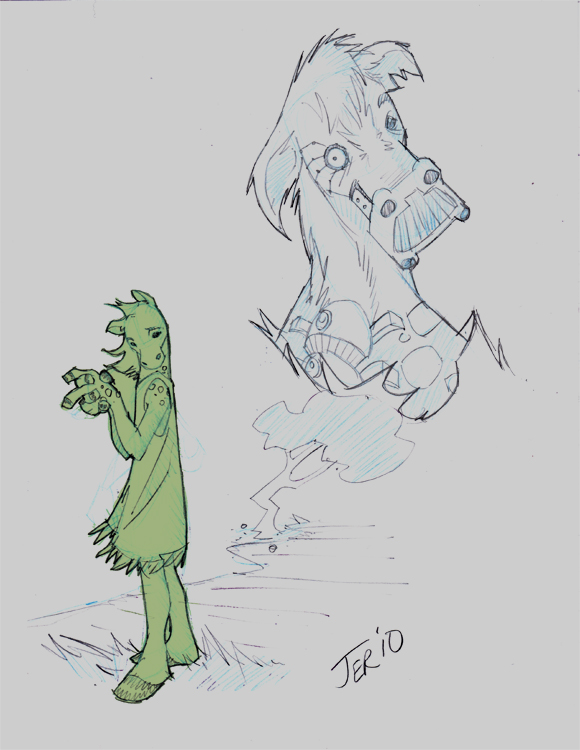 sorry i didnt have time to color it but the request really intrigued me :)

i basically made a one shot of the sith experiment looking back on her former life.

here was the original request from jarga the hutt:

Background: I'm running a SWRPG game in which one of my players is playing a Thakwaash. The player had written into his backstory that he had a younger sister that was missing. Through the course of the adventure so far the party has discovered that this sister is traveling with a Sith. The party thinks that she may have been turned to the darkside but actually this Sith kidnapped this girl to use her as a lab-rat for his twisted experiments. This Sith has, over the course of the last 6-8 years, installed and removed dozens of cybernetic devices and extensively experimented on her using Sith Alchemy. All of these experiments were unnecessary and were done only to satisfy his twisted curiosity.

A basic writeup on Thakwaash can be found on wookiepedia here: http://starwars.wikia.com/wiki/Thakwaash
Suffice to say that Thakwaash are large anthropomorphic horse-people.

In the "before" picture she should be in her early teens, wearing a simple skirt and blouse. Her favorite color is green so she should have at least something on the is green. She should be standing in some sort of agricultural or rural setting (i.e. a field, meadow, forest glen or something like that).

In the "after" picture she should be in her early twenties and should be dressed in slave's garb. She has, at this point, endured half a decade of experiments and should be heavily scarred with numerous cybernetic devices and Sith alchemical augmentations. I have in my mind an image of her with a cybernetic eye, breath mask and numerous cancerous growths (the result of the Sith alchemy). The exact details of the cybernetic/alchemical alterations are not really as important as the concept that she has been twisted into something truly pathetic. I would really like to get an emotional response out of my players as they discover that this once happy young girl has been transformed into this creature.

I love the wind-swept plains look of the pre-alchemized state. Very nice!