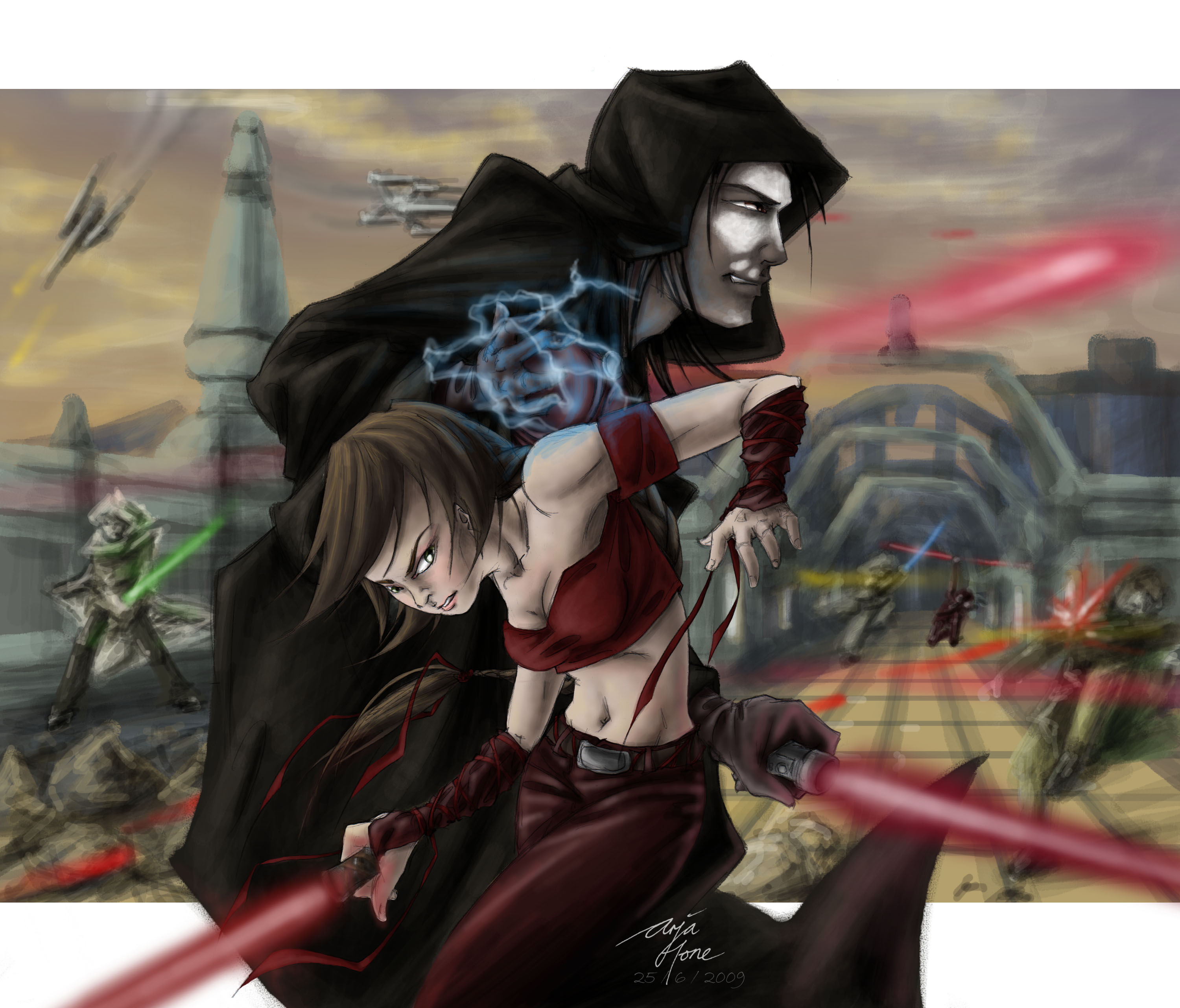 A request from Mev186 for a new picture featuring those previous characters I've drawn, Darth Mainyu and his apprentice, Trisskar. Here they are in an action pose, fighting alongside each other in an as yet unwritten scene;

"Although currently there isn't a scene that best fits the pair fighting together, as we are still in the process of writing it >_< However Triss would be looking & dressed similar to how she is in the previous images, as would Mainyu. Mainyu would be enjoying the battle, Like a kid in a candy store. After all, he's reliving his old glory days from the war. Triss would be almost...feral, primal.... a wild cat or tiger inside a human body, ready to leap out at her enemies. The fight that will be taking place would be in the thread Insurrection (link below) fighting in the streets of Iziz on Onderon, against Jedi and rebel fighters."

Gosh, this resolved to the gallery awful quick!!

Love the colors and the pose to the characters along with the shading. It all blends together so well. I like the lightning effect on Darth Mainyu hand. It lets you what he is about to do. All around great pic.

The thread that prompted this picture hit a very dead spot at one point, This picture inspired the "OP" and thus others to resurrect the thread. Insurrection is just now entering into the battle scene that is captured here! (Thanks to Setie and her plot of doom...) So Thank you Mercy for both the picture and inspiration to - keep moving forward!

And Triss, that's the best endorsement I've had! Thanks!!
I'm so pleased that we've managed to get together and inspire others, wow!!

I think it is really quite wonderful that our stories have inspired you, and your art has turned around to inspire us. I can't wait to think up more scenes for you to draw, see what new things can come out of it ^_^ hehe

Mabey I should get you to draw Triss with Tails sometime, would be neat to see her little companion resting in her arms or on her shoulder ^_^ )

Yeah, that would be pretty cool, Triss!

Mercy, Mercy, Mercy....YOU'RE AWESOME! I really like this one, and the background is sweeet!