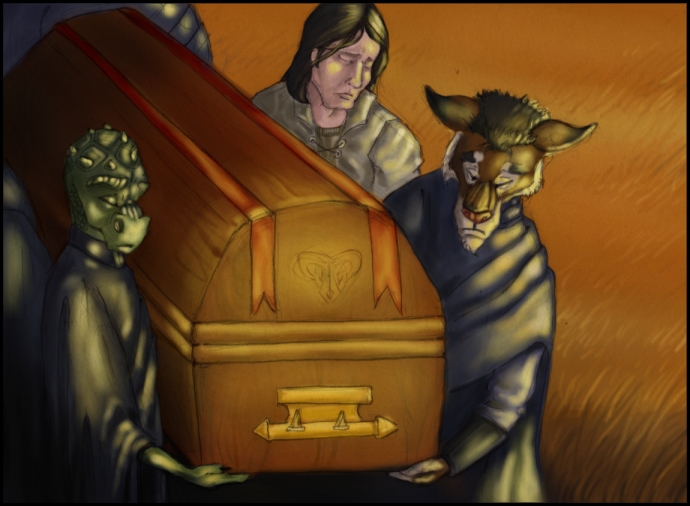 So, the GM was determined that dear Trys would die, despite Tusserk's best (and darkest) efforts. In a rather epic session, we were finally confronted by our dear boss Lord Vader about... cough, ahem, well, about a LOT of things we hadn't done in strict accord with Imperial law. And the squad finally turned its collective back on the Empire (Tusserk says YAY!!). However, in the ensuing battle (as all good sessions must have) Trys sacrificed herself to control a massive blowout in our ship's engine, taking a huge hit of radiation to go. There was nothing that could be done to save her.

When the fight finally dispersed, with the squad left exhausted and without direction, wondering where to go from here, Tusserk had a very simple request, and he would consider nothing else until it was granted. "Take us to Alderaan. I'm taking her HOME."

Depicted here is Tusserk (of course), his Master Kieran Gejjen (who also may or may not have been 'involved' with Trys at some stage, it was 'complicated' and only ever hinted at in-game, and to this very day none of us players know the real details there), and Trys' father, Tor Fey'Kria.

Great piece and almost brings a tear to me eye.