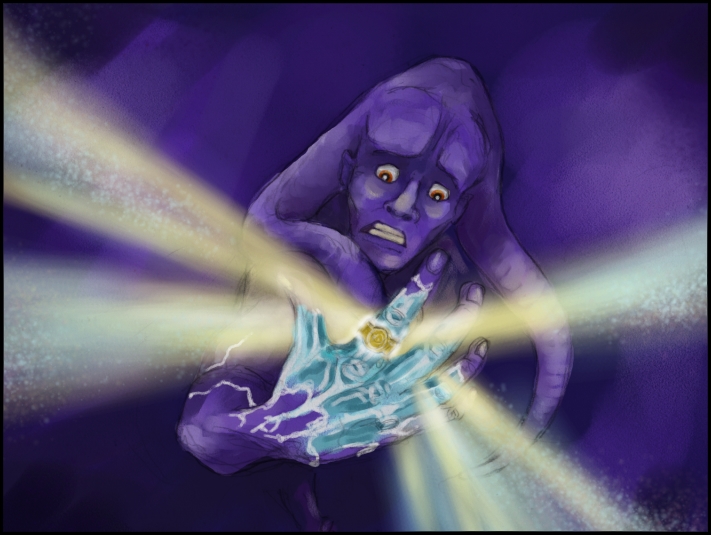 What did you THINK was going to happen!?

In one of our earliest sessions, way back at the beginning of 2009, the Squad had a little adventure through an ancient temple that had, as far as we could tell, been occupied by both Jedi and Sith during various phases of its history. It's where the group first encountered Master Naduun, who gave Tuss his first lightsaber, and where Tuss and Toaster first learned of Toaster's Force sensitivity. Ah, memories!

It's also where the squad's illustrious Twi'lek Captain, Lonar, picked up a quaint little artifact; a gold ring with an obscure engraving on it. Which he stowed away somewhere in the WordBird and promptly forgot about.

Over a year later (both in and out of game!), while Lonar is going through his inventory, he stumbles across the ring again. And puts it on. GM had been waiting OVER A YEAR for someone to do this!!

And thus began the period of time where we lovingly referred to Lonar's right arm as 'Darth Fist'.

Ma ha ha!! You guys have the most EPIC adventures!!!

Ha! My pal Tim did something similiar with a scepter in a mummies tomb.
Nice pic. Love the way the focus kinda spreads out with the light from the ring.

Ahahahaaa, Lonar's player is a Tim, too! It must come with the name...

Dramatic lights and sparks and glowings and stuff are my greatest weakness... (aside from puppies, nothing beats puppies) ...I just can't help myself when the opportunity arises!