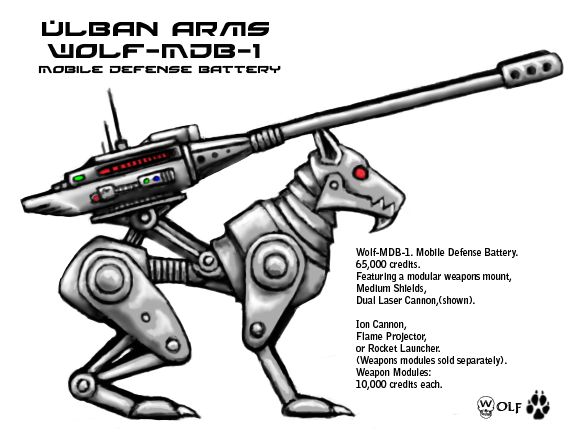 I designed this for current RP use. Manufactured by Ulban Arms, the 'Wolf-MDB-1', Mobile Defense Battery. ;)

Whoa!! Okay, so first off the bat; what an awesome idea and badass design! Anyone who knows me IRL would appreciate why this has massive instant appeal to me. ;) I might even have a go at drawing one of these in action some time, if you wouldn't mind that is!

Secondly though- haha, you happen to have stumbled upon an area I know very well (ie animal form and function), and I'd love to offer you some pointers on the design of this (animal? droid? machine? How shall we refer to it?) that I hope will help with any further depictions you might do!

What you have there, as it currently stands, is something built for jumping/leaping. If this is the intent of the machine, to be adept at clearing wide gaps and high fences, fantastic! But walking or running would be quite awkward-- unless the machine lifts its forequarters off the ground and moves only with its hind legs. The hind legs are simply much longer than the front legs, and its walking gait (if using all four limbs) would be something like a human walking on hands and feet; (not at all graceful or effective) or a kangaroo (without the tail to assist).

Now, being based on a 'wolf' as the name of the model implies, I am more inclined to believe that the intent of the machine is to move the way a wolf is designed to- ie, built to run. Look at any animal built for running (be it a wolf, a horse or a cheetah,) and you'll see the front and hind legs, when the animal is standing comfortably, are basically the same length. For contrast, take a look at animals built more for stealth/crouching and leaping ability, for example the red fox (see how the hind legs aren't nearly as 'straight' as the standing wolf? But still nearly not as much 'bend' going on at the joints as your machine) or a big cat (look especially at the lower row of images in that series). A tiger will never outrun a deer or be able to pursue it over a distance like a wolf will; the tiger relies on sneaking up undetected, and that powerful lunge at the last minute, and so is built very differently.

Of course in the end it's totally up to you how you envision the machine moving and what you believe it to be best at; my personal suggestion would be to lengthen the back slightly, and even out the legs a little- if it's standing, straighten the back legs and shorten them a little, while lengthening the forelegs slightly, and if it's crouching, lengthen the front legs and bend them much more to match what the hind legs are doing.

Anyway, at the end of the day it's your design, and it's still super cool! But hopefully I've managed to make enough sense there to offer you a bit of food for thought should you choose to draw more Wolf-MBD units. :D

This be very cool!

I always worry that I'm going to come off sounding TOTALLY pretentious when I try to give help like this online... it can be so hard to say "I know this stuff! Trust me, I'm a _____" over the internet without sounding like a tool (for want of a better word :P). But hey, this is one of the few areas I believe/hope I can be genuinely helpful-- there are LOADS of people with much war Star Wars/technical artistic know-how than me, that's for sure! Heh.

So anyway, glad to be of service, and I can't wait to see what more you might do with this design!