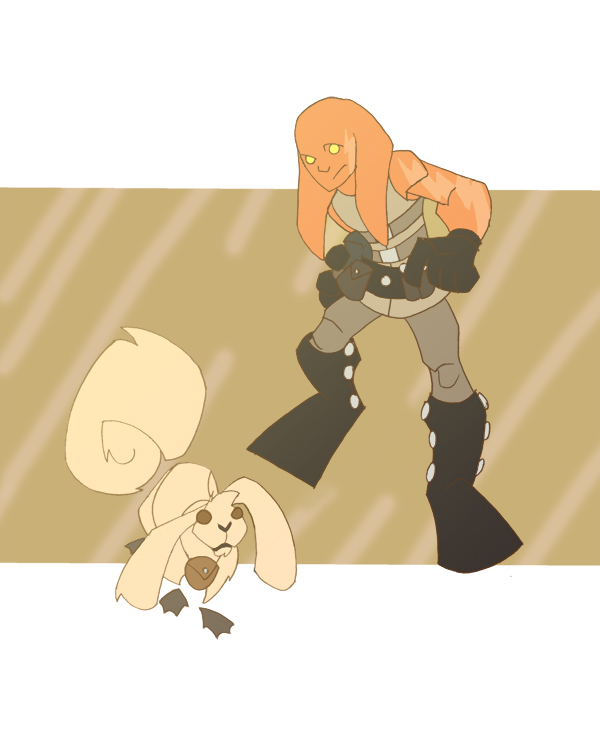 request from yuit420. hope you love it! here is the original request:

I will start this off with saying this is probably the -most- rare thing to find is a younger(not under 12) twi'lek male that doesn't look like someone sharpened their teeth or popped them out looking like a jellyfish ripoff.(slimey and such)
I have a description from a Star Wars MUSH I'm playing on called Unsung Heroes and several people mentioned placing a request here for a few good artists to take up and create since after hours of searching none of us could really find a good image to suit my character's.
So here goes the description I have laid out:
---------------------------------------------------
Standing around 4'10 with a lush light orange colored skin is a Twi'lek, his head-tails lay generally loose over the front of his shoulders with a thin but strong appearance. Bright yellow pupils peer from underneath his brow with thin lips pursed together showing off a cardinal red hue, different from his skin itself. Stripes that look similar to lightning strips are layered down his arms and along the outline of his face, their light color showing brightly once noticed as they blend well with his skin.
Wrist high black leather gloves would be the first obvious portion of this boy's clothing as his arms show bare from a shoulder-cut leather shirt held tightly to his body. Belts wrap around the front, side, and back three times up and down his abdomen while the tight leather shirt flows down into a tactical belt full of pockets for various gadgets and a gun holster on his right thigh with a small blaster pistol in the spot. The pants themselves are tight but not form-defining, leading down his legs into a pair of shin-high black boots. The boots themselves have silver studs protruding along the outside of them to the sole, where when the boy walks silver spikes are underneath the very soles to provide unbelievable traction for whatever reason he may need.
-----------------------------------------------------
I have a little image to resemble his appearance, but I want to see the artistry behind your images. I don't want to ruin it and give you 100% of what *I* want, but I only want a little guide line.
You can change the 'decals', the lip color, and his clothing(though I wish to keep the 'belt pouches') to your desire, along with most of everything else. This is only a basis for mainly color and athletic build.
Background for the Character:
He was born on Bespin to a slave twi'lek woman and a smuggler human male. The smuggler didn't want him and was going to throw him off the cliff when another human(a mine-worker) took the child in. From there, he was raised as an engineer/construction/programmer/electrician on this very large mining platform where he was often the one placed into dangerous situations cause he was small enough to fit. He's short and can be considered a runt of the pack.
The way he's going while I'm roleplaying him is that he's -highly- force sensitive and is right now being trained by a Sith in the ways of lightsaber combat(no lightsaber yet) and force usage. Though a small Kushiban(Props if you add her in the photo!!! description below) has recently began persuading him to get out of his current situation and seek help from the Jedi. It's a wishy-washy situation where this character(Hatsu) can go either way at the moment.
He was last seen on Ord Montell fighting off guards in a Casino with a wrench!
(The Kushiban if you want to add her)
When upright, the ball of fluff is just shy of half a meter tall. Most often, that height is even further diminished by the small fluffy aliens way of walking on all four feet. A small round head with large amber colored eyes sports a pair of long, slender floppy ears that are usually laced back along the head, then coming forward over the shoulders, very nearly touching the ground. The other distinguishing characteristic is the long plumed tail, which is nearly as long as the little alien is tall. The front hands have three fingers and an opposable thumb, and the rear feet have three forward facing toes. The medium length fur has a soft downy appearance, and is a gently shaded creamy white.
Around her neck, a thin band of woven synthleather suspends a small brown pouch. The band is mostly hidden by her fur, and the pouch rests against her chest.

Cool interpretation. I like your strong lines and bold shape; you've captured movement, making this a living piece of work, not a static portrait.

thats what i was goin for smile. THANKS!

it's true that, as individuals, we can't change the world. but if we band together, and lock arms in a line, we can play "red rover, red rover." -nick decamp