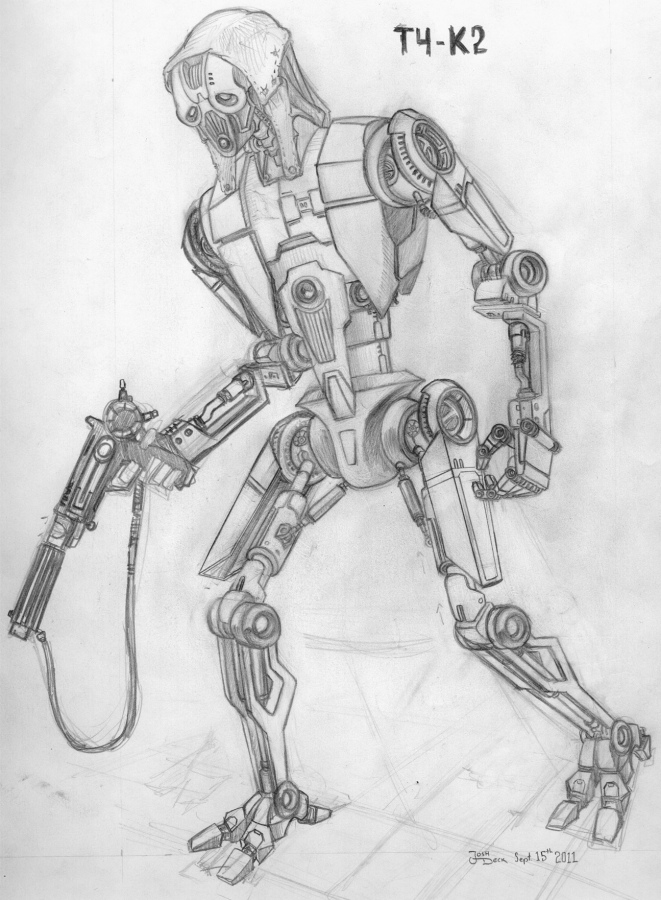 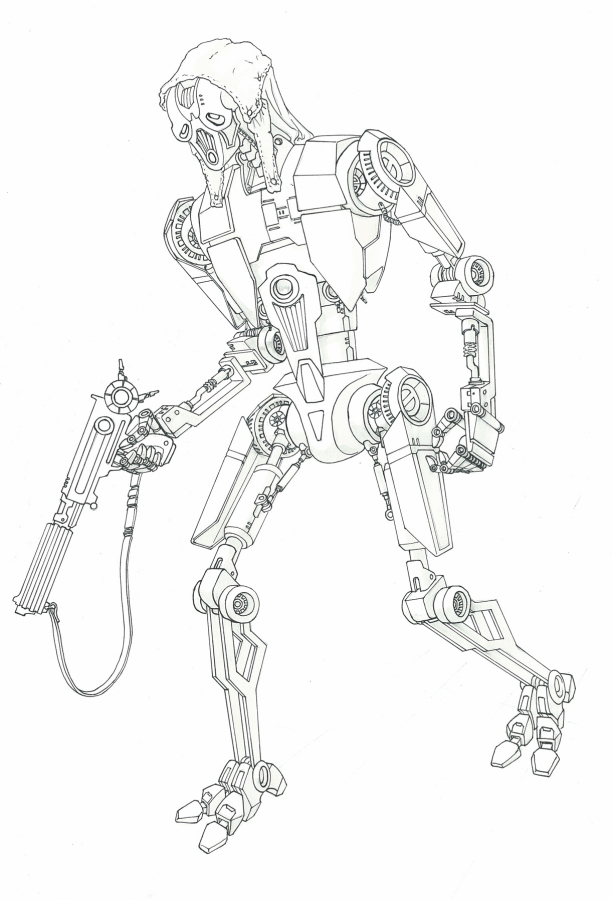 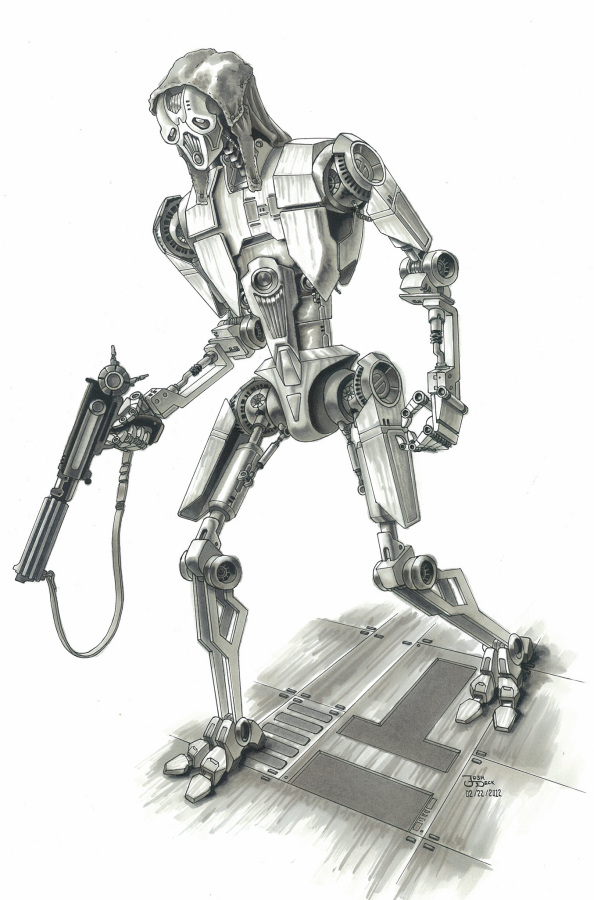 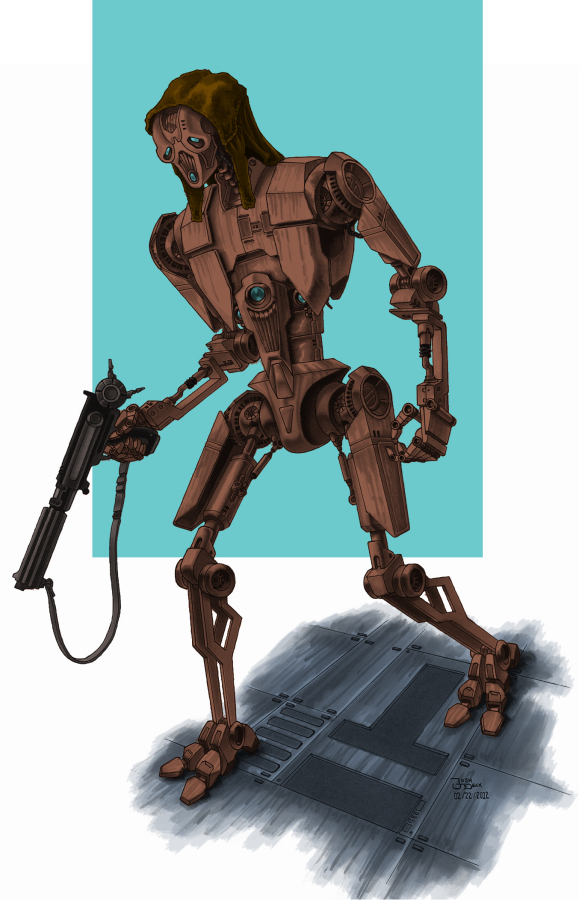 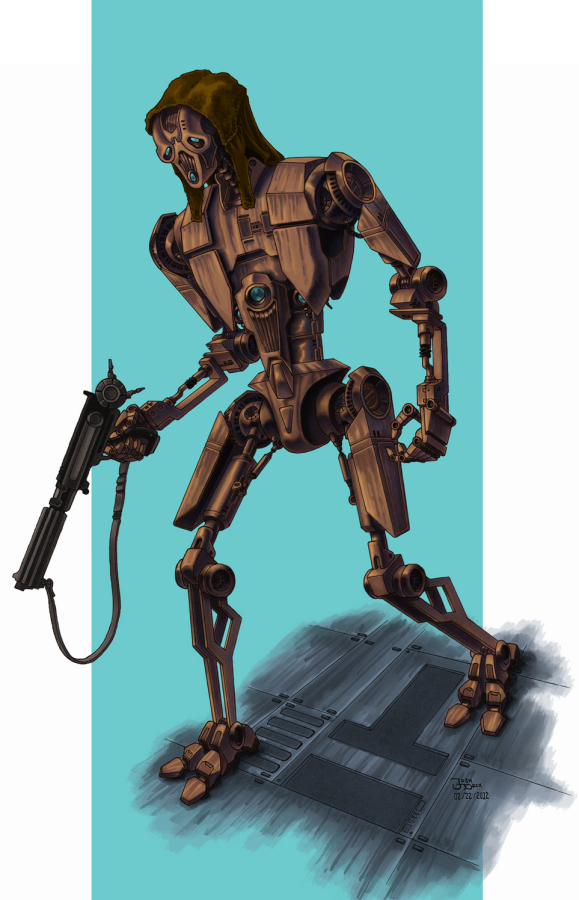 OK, at long last I have cobbled together ONE rough out of several design bits-n'-pieces sketches of T4-K2!!

Even though this is still just a rough sketch [and I'm pretty sure it has some serious proportional issues to work out], I gotta get a WIP blog going on this guy. As requested, I have looked at HK-47 as well as the MagnaGuard designs for inspiration.I think ultimately the only similarity to either is the central torso area, which has elements of both droids in it.

I gave T4-K2 here a hood to give it the sense of having a personality, kind of a simple affectation for cloth. I was going to also draw some belts and pouches on it, but then I didn't want to cover up all the techie bits... also, the blaster rifle is totally made up, but kinda has vague elements of a Deece?

Cadden, please let me know what you think - as this is still a rough stage, I can tweak some more. And please bear with me, it'll still be a long time before getting further along with this guy. I am just lucky enough to be able to do some sketching at work from time to time. I've still got a lot on my plate otherwise :(

It's looking good. It holds that "I'm intimidating with a blaster rifle, but I look harmless without one" appearance that I was hoping for quite well. The hood is a nice touch. :)

WHOA!! That is crazy good! SCARY

Cadden - glad you like it!! I'll be working on a better final version as I am able, but I think I'll be using this pose.

I love your tech work...It almost looks sad it had to vaporize someone...twice.

Thanks for the feedback - the droopy gun is corrected now, and I also made an adjustment to the length of his legs. I think he was a bit too stubby before... this is the final ink stage, next up is marker rendering.

Wow! I will forever live in fear that one o' those things is hunting me down. This is lookin' sweet.

Thanks Judas!! I found it tough to make him look intimidating yet able to pass for a harmless medical type droid [The head of this guy was loosely inspired by the medical droid from the original movie trilogy]. Sounds like I pulled it off?

I've added my initial scan of the marker render - some clean-up & tweaking will occur now in photoshop, along with the final stage of adding colour... :)

This is awsome. It looks great and I love the shading

I'm loving this. Can't wait for the final product. XD

Outstanding my friend! Looking crisp and defined. The gun is arrow-straight. The panel work he is standing on is a nice touch.

That is some SERIOUS professional quality stuff right there. Crazy impressive!

This is amazing! I feel I've been put to shame... lol

Methodical but with excellent results. Just about ready to stick a fork in it? :D

Why, yes Dred - a few more tweaks, and I'm finally calling it done! [I can't figure out how to link stuff on this site... Xan?!]