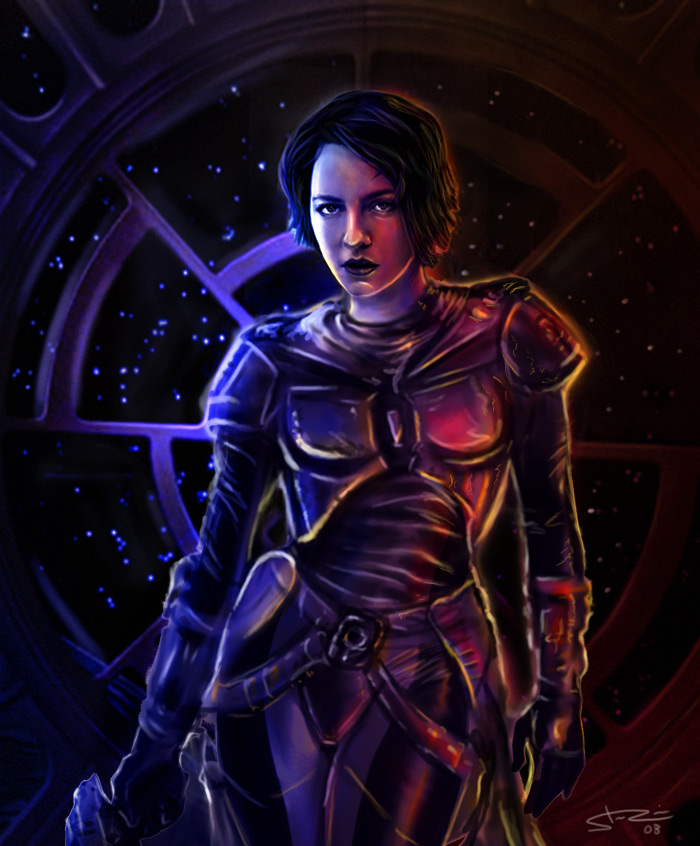 I haven't worked on much for a little and wanted something new to draw. I worked with mara.mcduff on an idea of one of her characters. I did this in photoshop and painter back and forth for a little while. I kept on fighting with color but I think it came out well.

As a 5-year-old Nya Halcyon survived Order 66 and the ensuing Jedi Purge only through the aid of a renegade clone commando sent to her by her father upon his death. When her entire world was thus turned upside down, she clung to her rescuer who introduced her to a completely different world: that of the Mandalorian warriors. After becoming a Mando of her own rights, she set out to hide her Force skills behind the mask of a bounty hunter and mercenary - until a brush with the past brought out the dark side in her. Banished from her home, trying to fight for control and balance again, she did what she could to struggle against her darker side but eeking a living on the bottom of the mercenary food chain didn't help an awful lot. But now things are looking up as two men - one she thought she had killed, and another she wished she had killed - intrude on her mess of a life, and it looks as if she might finally come to terms with her past as well as her present.

Very nice job Scriado... love the feeling that it gives, not to light, not to dark... just her being there to take on whatever challenge lies ahead. Very serious expression to... She looks great man... good to see some more of your work.

I agree with Xan, your lighting effects tell the story of her constant struggle for balance. The hope in the light, the seduction of the dark - this lady walks the line between the two.

Marvelous work as ever, Scriado.
~ Mercy

I love the color! Indeed.

Just loving this one - I can't wait to get a chance to display it somewhere in its entirety! Thank you again for all the work you put into this!

I love this, and not because it looks exactly like me.

just beautiful! I love the coloration.

I loooooooooove the colors.....and the whole idea of her character!

Member since: 2007
Location
Youngstown, Oh, US