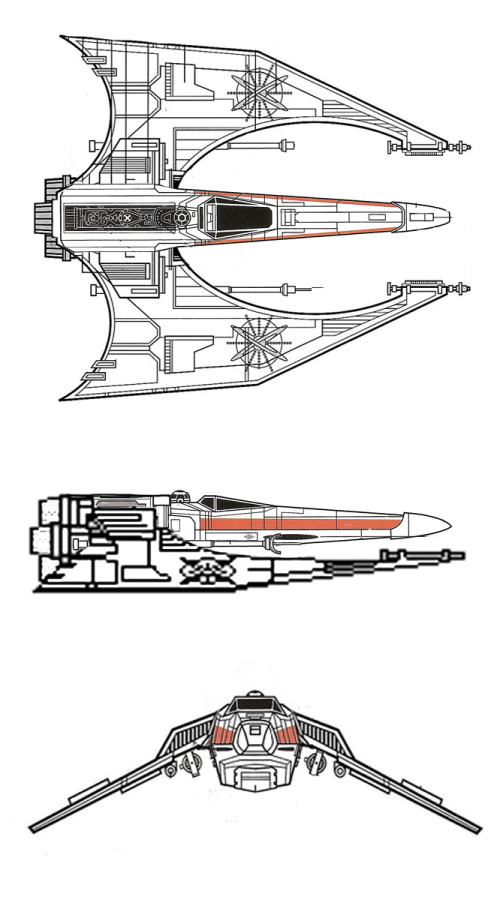 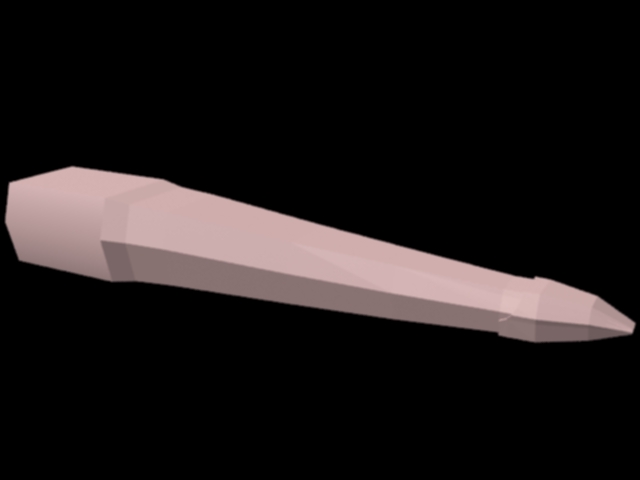 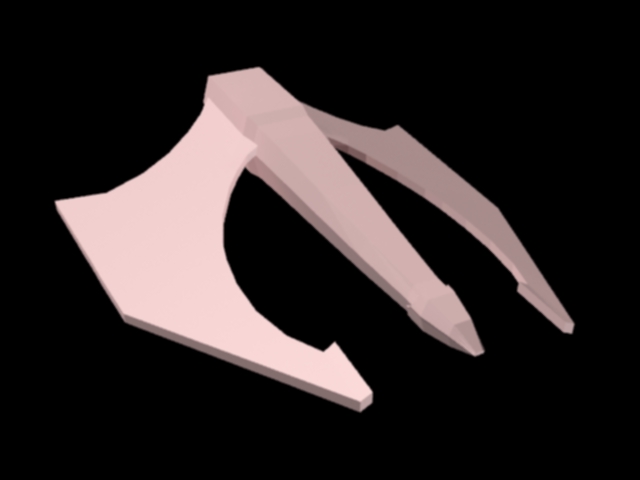 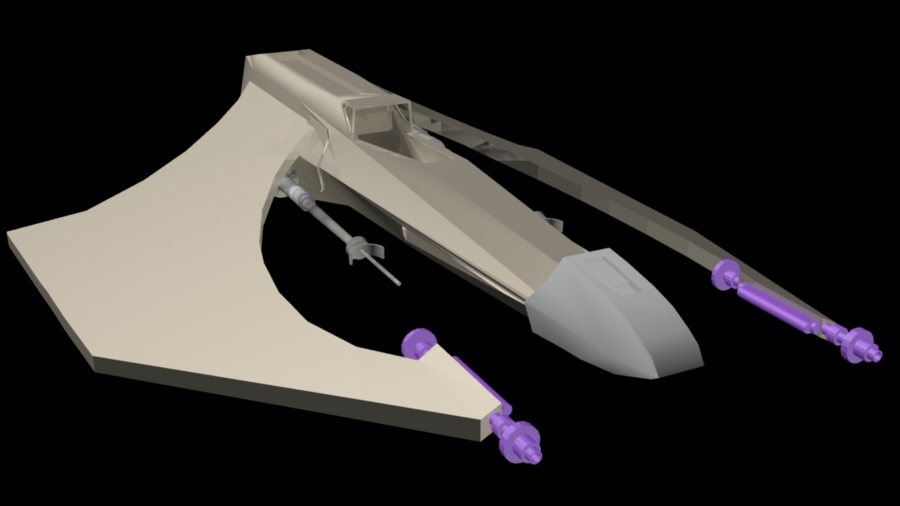 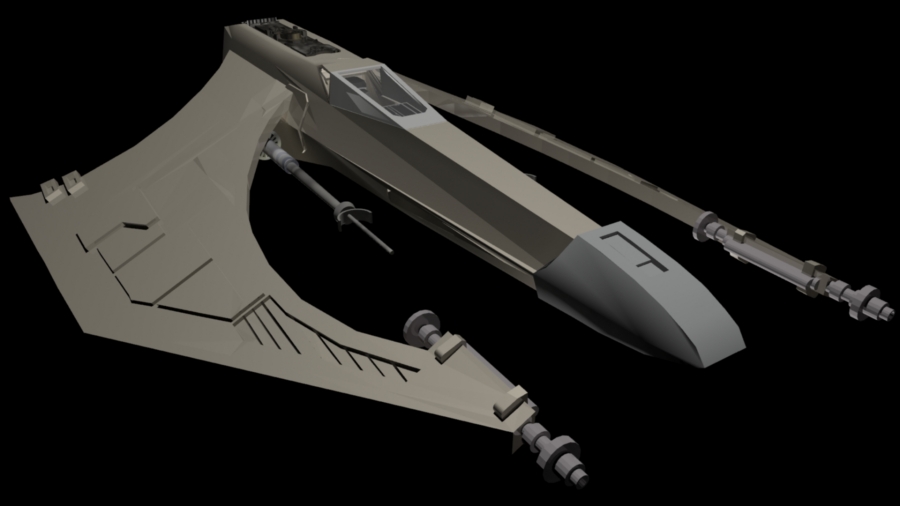 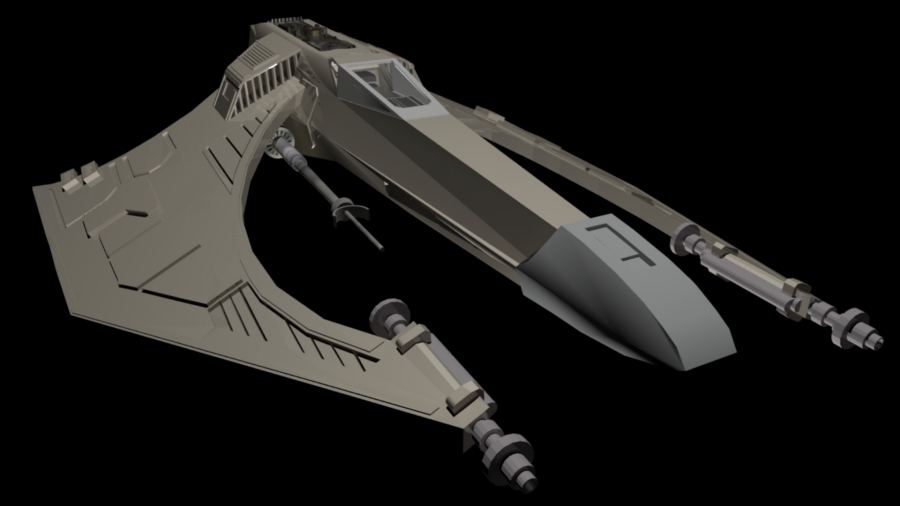 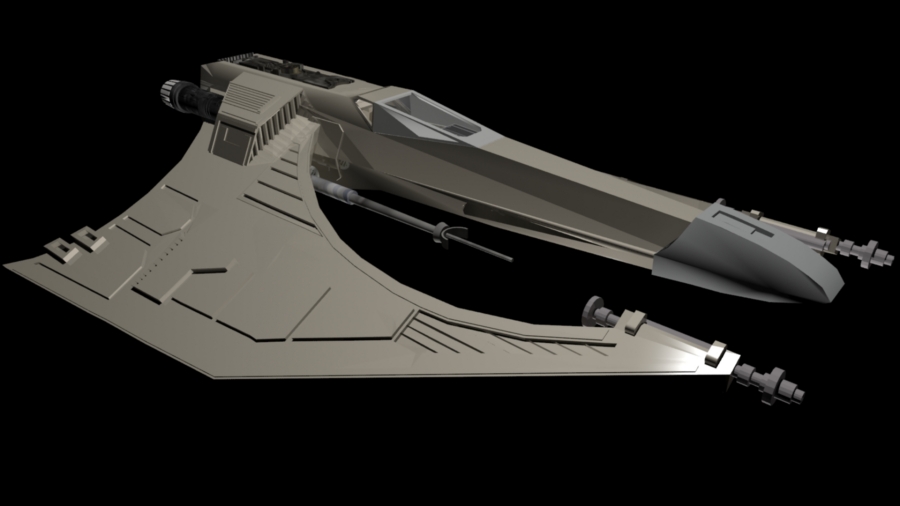 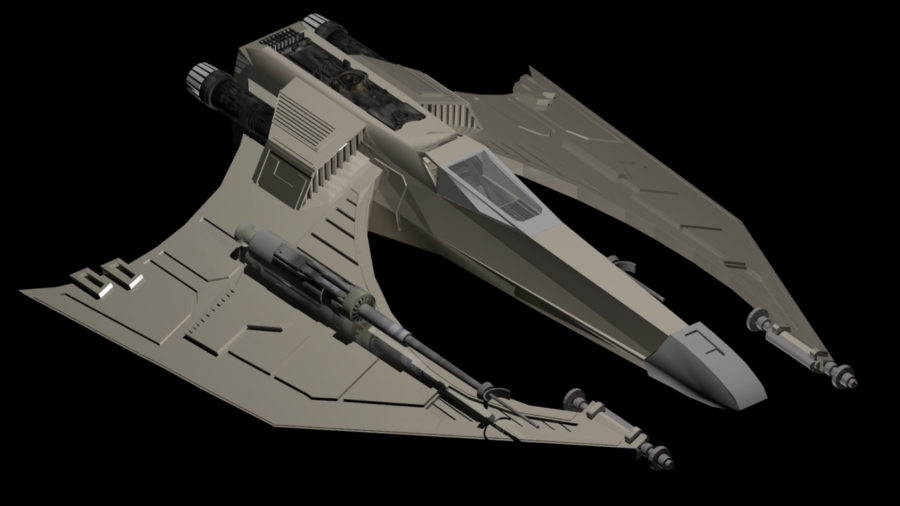 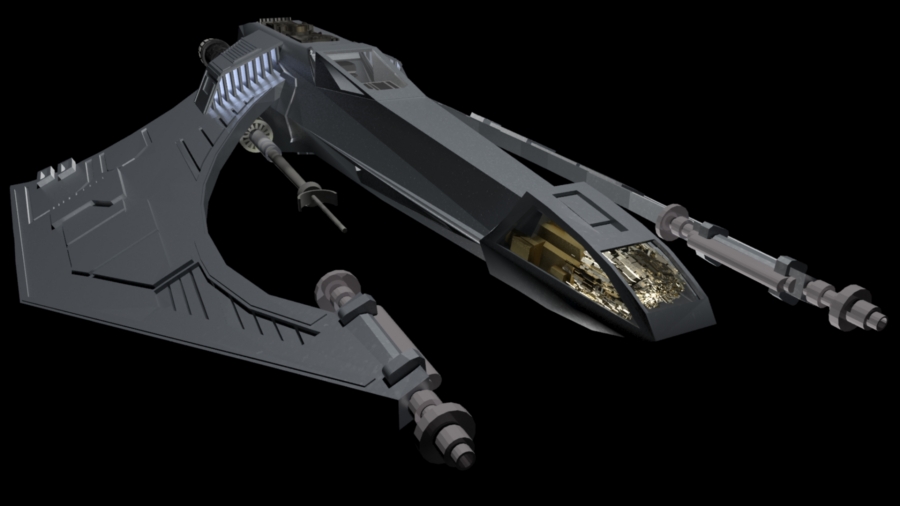 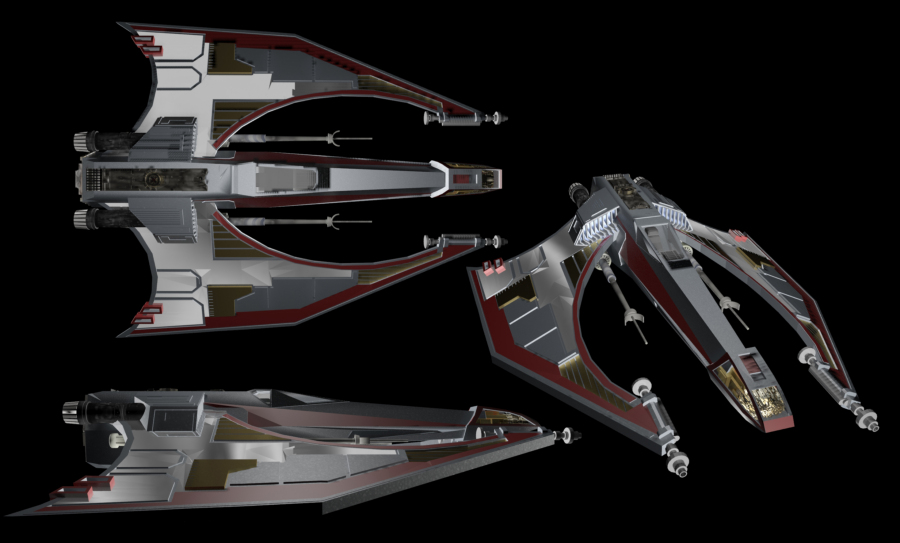 This request is for a new class of fighter which is a hybrid of the x-wing fighter and the hapan miy'til. Surprisingly, these two ships meld quiet well together.

1. Concept Art - this is my melding of the two ships.
2. Initial Fuselage design.
3. Basic wings added.
4. Added the laser cannons, ion cannons and reshaped the nose cone.
5. Added cockpit, rear fuselage greebles, started wing greebles. Also added some better light.
6. Finished wing greebles, added intakes with detail
7. Added engines
8. This image has an alternate design of having the laser cannons on the top side of the wing instead of underslung.
9. Cannon moved back under the wing. Made some detail touch ups. Added the transparent nosecone with sensor package. Added engine glow to the intakes.
10. Final Rapier Defender fighter.

This is good. I would like the nose to be a little more clear, like transparent on the sides. Instead of the engines of the Miy'til, use your skills to create an engine model you think would be better for the ship. Remove the Droid head and try to streamline the X-wing Fuselage to make it appear a little more original. But overall, that is pretty much it. Question is, can you create the Bomber and Interceptor as well?

You want the nose cone to be transparent so you can see the wires and whatnot on the inside? As for the engines, I'll see what I can come up with. I personally kinda like the tri-engine look based on the three symmetric points at the fore of the ship. I'll see if I come up with something better though. Removing the droid is easy enough and I'll play around with the fuselage to make it more unique.

As for the bomber and interceptor, it shouldn't be too hard to make those once the Rapier is done since I will already have the base design done. Since I will be working in 3ds Max, it won't be too hard to alter the model two make a two seater for the Broadsword and a smaller model for the Dagger.

It is not just to see the wires, but to allow the sensor package that is in there to have a more unobstructed view and allows the pilot to have better targeting and flight characteristics, thereby giving the pilot a slight edge in combat. If you need more intel about the Bomber and Interceptor I can give it to you when you are ready.

Go ahead and put them up now and I can reference them when I get to that point.

The Broadsword is a larger, two man version of the Rapier and is armed with two laser cannons facing fore and aft, two ion cannons facing fore and a bomb bay capable of delivering 15 proton bombs, 40 thermal detonators, or 10 torpedoes. Because it is larger, it is not as maneuverable as the Rapier. But it is capable of taking more damage as it has heavier armor plating. Therefore, the Broadsword needs to look more armored than the Rapier. It needs to have the same physical characteristics like the transparent nosecone, lack of Droid head and such.

The Dagger Interceptor is basically a smaller version of the Rapier. It still has two laser cannons, but only one Ion cannon. The Laser cannon does not have to be the one on an X-wing, it can look like anything. The biggest difference is the external, detachable, rocket pod. Kinda like what you see on Helicopters such as the Apache Longbow. The engines need to be the same size as on the Rapier, but with the fuselage smaller, maybe even a little truncated.

When you get a chance, see if you can move the Laser cannons to the top, outside wings instead of underneath the wings.

First two WIP have been uploaded.

You want the main laser cannons on top of the wing? Hrm, looks odd to me, but I will play around with it to see what it looks like.

Those look good. I like it. By all means play around with it, I just want to see what each design will look like. If they look better on the undercarriage then you can keep them like that. I really do appreciate this. I have let the other writers on the Exodus Forum Boards about your acceptance of the job. If anyone there likes your work I am almost sure they will contact you for their artwork as well.

Next two WIP have been added.

Right now the laser cannons are under the wings as I haven't played with the top side look yet. The nose cone has been shaped, but I haven't added transparency to it yet. I will do that near the end.

It looks awesome man. You are doing a wonderful job on this, please keep it up!!!

Added three more wip pics. The first add the intakes and a twin engine system. I settled on two for the moment as the hybrid design doesn't really leave a lot of places to put engines. I'll keep playing around with it though.

The last pic shows the laser cannons on the top side of the wing for your review. I personally don't care for it from a design standpoint or a functionality point, but that's just me :)

Yeah, I don't like the weapons that close to the cockpit. Try moving them to the outer edge of the wing and shorten them maybe? Put them closer to the Ion Cannons halfway between the the cannons and the edge of the wing. Maybe the KX-9 lasers can be swapped out for a different type of laser cannon. Maybe try the Gyrhil R-9X Heavy Laser Cannon. Click on this link http://starwars.wikia.com/wiki/Hornet_interceptor?file=Hornet-Intercept…, and click on the schematic on the right side of the screen.

I swapped out the last pic for a new one that moves the cannon closer to the middle of the wing.

I took a look at the other cannon and the design of it is more for a side mounting rather than a top side. What is the purpose of having the cannon on the top side rather than underneath?

To me it looks more deadly or dangerous that way. I traced the two ships together out of the Essential Guide to Vehicles And Vessels and had the laser cannons placed on the top, middle of the wing. It may have looked better because the design was a true Ugly and therefore unchanged from the modified design you are working on. You are the artist, and therefore the designer. From a design standpoint, could you please help me understand your perspective?

There are a couple of things that I look at when considering the placement of the cannon. First is it aesthetically pleasing which I would say no because it takes away from the flow of the wing. The design of the wing reminds me of a bat-like design, with sharp edges and a sweeping look like the ship is diving upon prey. The cannon on top breaks up the simple, yet graceful look. A side mounted cannon at the edge of the wing or an under carriage mounted cannon would help keep the design flow of the wing intake while still being effective.

Secondly, I look at the design of the ship from a functionality standpoint. Most star fighters in Star Wars are designed to be used in space and in the air. In space, you can design a ship however you want as you have no resistance or gravity to worry about. Wen designing a fighter for the air, there are many aerodynamic questions and situations you have to account for. The majority of modern planes and a good chunk of Star Wars fighters have their weapons side mounted on the wing or tucked underneath. An aerodynamic design would be to have a profile that funnels air/wind in a favorable way to make the fighter go faster and have a better turn radius. Weapons are moved closer to the fuselage or under the wing to have a better profile. This is because the nosecone of the fighter determines the direction of the air currents, most of which are designed to go over the top of the fighter. A cannon on the top of the wing would create wind resistance and therefore, slow you down.

Also, you would have to keep in mind that a cannon on top of the wing creates a juicy target for an enemy pilot as it is easily targeted and in addition, taking out the cannon with a precise shot would also give you an added bonus of damaging the wing of the fighter. By moving the cannon to the outside, there is less chance of having damage to your wing if the cannon is hit. Even better, moving the cannon underneath and close to the fuselage makes the profile of the cannon harder to target and therefore, less likely to be targeted by an enemy pilot.

And thanks again for the lesson.

No problem. Just wanted to make sure we got it right, especially since this part of a larger work that you are doing.

That said, the last image is pretty much a completed model of the Rapier Defender minus painting since you didn't mention anything about color schemes. Think of it as a model right off the production line.

I like it, I really do. I myself have not determined what color schemes I will use. But, I have 4 color schemes for some of my other fighter squadrons. I have the Red, White, Blue, and Black Knights.I was thinking red & chrome, black & chrome, etc. When you have a chance, fiddle with a color design working with those two color types for the ships.
Now what were you thinking for the Bomber version? Like I said earlier, it is the same basic design just bigger to accommodate two people and a heavy assault payload.

I'm thinking a standard one behind the other like most standard modern jets or like the two-seater Y-Wing or the ARC-170. That would be the easiest thing to do as well as I just have to extend the fuselage to fit an extra seat in. As a benefit, by extending the fuselage, it adds space underneath for the bomb bay. As for the rear facing laser cannons, I will probably use a different model of cannon, something with a shorter barrel.

Sounds good to me, can't wait to see it. You are doing a great job so far.

Can you make a design with the engines in the rear, like your concept art? I have someone who wishes to roleplay using the modified design you came up with in your concept art.