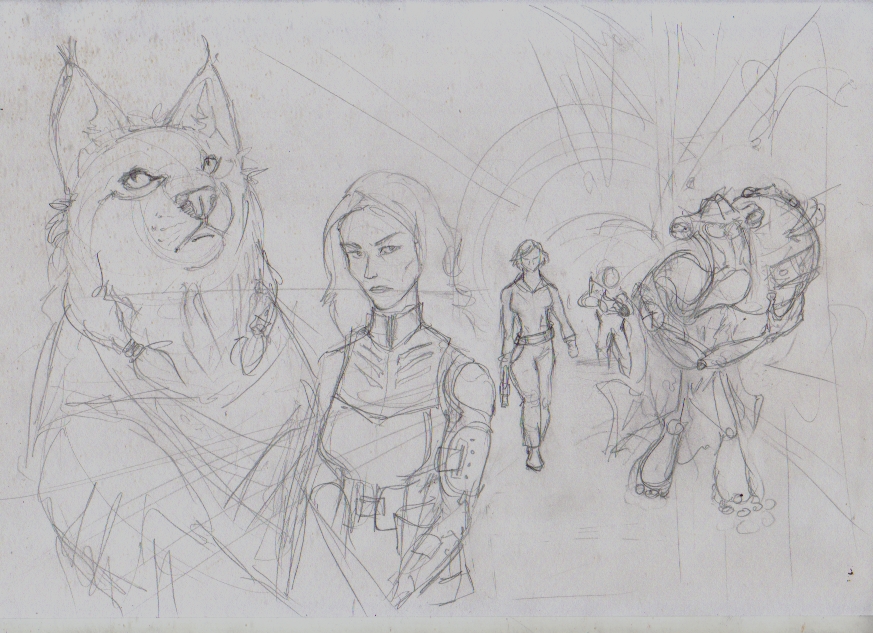 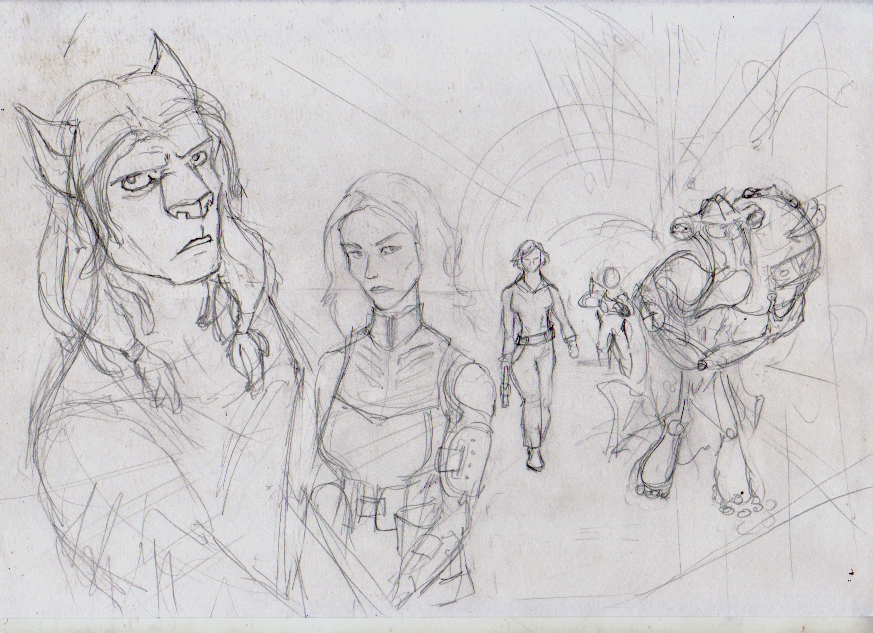 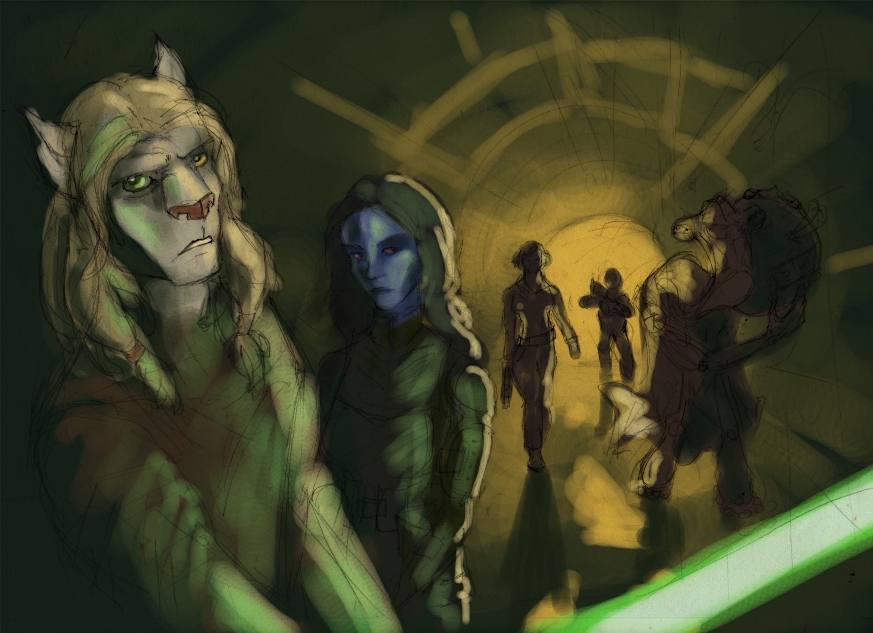 Felt like blogging this one! Unnatural Gas's request for the group he GMs for; the group of heroes making their way through what used to be a subway system.

Just starting off with my first sketch, working out the basic look of the characters and layout of the piece. Focusing on Vashani (Cathar), Nex (Chiss) and Doc (Ithorian), with the other characters featuring only as 'background' elements really. My favoured look for a male Cathar is the very lynx-like depiction that appeared in one of the Saga Edition rulebooks, which is what I've gone for... UG, if Vashani's player imagines their character with a vastly different appearance, now's your chance to let me know!!

Update 15/10 - Same sketch, but with new-look Vashani! Hopefully this is more in line with the player's mental picture?

Update 18/10 - Just a super quick colour mockup over the rough sketch, seeing what it looks like with the colour scheme I'd very first envisioned.

Update 02/04 - Kind of wishing I didn't date these updates, because the gap between this and the last is just flat out embarrassing! I'm at the stage now, though, where I sort of just want to GO GO GO GO until it's done; but I've hit bedtime now and, well, Mr Unnatural has been so ridiculously good about this whole thing that I think he at the very least deserves an in-progress sneak peek.

I love seeing other's processes. We all work so differantly...and fine work by the way, gonna be cool

OMG! This is looking awesome!!!

I talked to Vashani's player. He said he likes it and doesn't want to ruin it, but imagined his character more human-looking, with feline features, and, as he put it, 'less linx-y'. :(

Aw! But that's cool, I mean that's half the point of showing the in-progress sketches, right? Especially with his character being one of the focal points of the piece, I do want to have it reflect his character as best as I can.

More sketching for me!!

I like the frist draft - the cat man is so much more feline! I like the more anatomically realistic style!

You and me both, Asok! But hey, I want the recipient of the piece to be happy, and it's not my character... maybe I'll just have to do up my own cathar some time to keep my own preferences satisfied as well!

Excellent, Tusserk! I was worried the change would drain some of your enthusiasm towards the piece, but I'm glad to see it hasn't.

Vashani's player is also very happy with the change. We look forward to seeing more!

Naw, getting the player's 'vision' right is just part of the challenge for me, UG! :D I'm glad he's happy with the change... now, to knuckle down and refine the sketch. Wheee!

I am accually leaning toward the new one...love it with the color trial. To be honest I thought the first one was a Husky kinda guy. Sorry. Might be because I have been looking at dog breeds as of late. The perspective is wonderful.
I like the way you are able to convey the scene with so little lines...Jealous here.

I like where this is going. Also very envious of your ability.

I agree, on both counts. I wish I could do this fast-and-loose paint style. Oh well, gotta go with what you've got. ;)

Oh wow. That spam sure got around.

looks like a poem... Pretty thick dialect I think. It's not Modern Standard anyway.
Man is my Arabic ever rusty.

love the new attitude on her. She has a more tough exterior look. Nice.

Incidentally, "Mr Unnatural" sounds awesome. I think I'll make it my superhero name if I ever get some awesome superpowers.