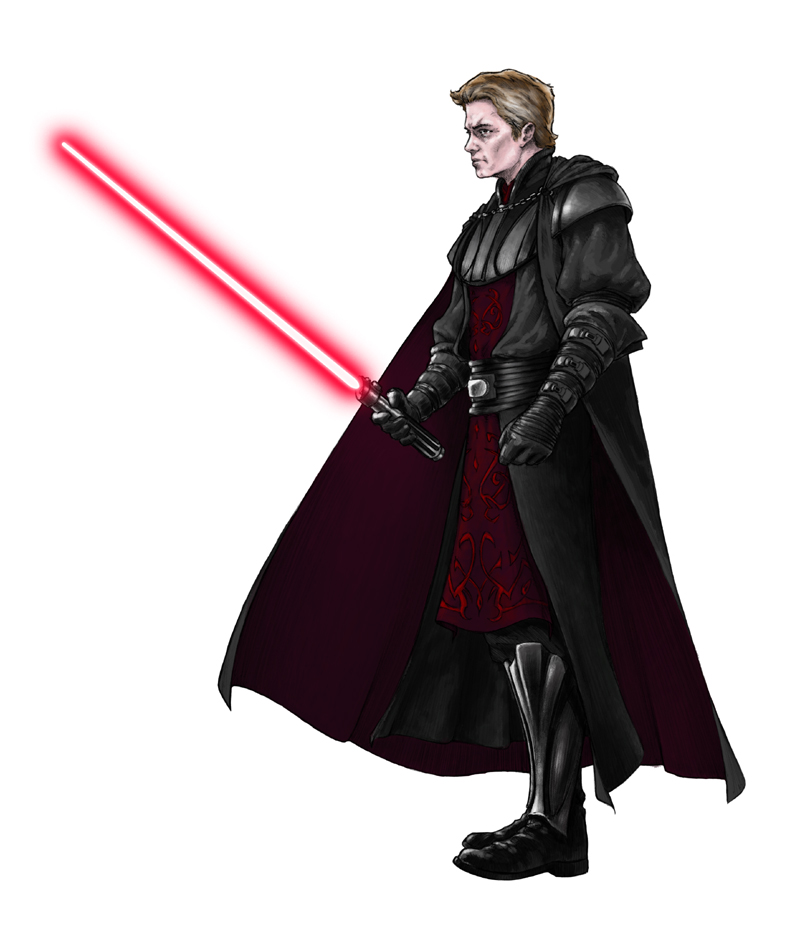 Original request from Thespius http://www.swagonline.com/node/5120 - "I need a depiction of Anakin/Vader, had he not been burned on Mustafar. He's the Emperor (inspired by the alternate ending in ROTS video game) so I'd like something formal, but not like Palpatine's dress robe. Also I was thinking shorter kept hair and wisp of grey. That's all I have, other than that him wearing a version of his Vader armor would be nice, and I'd like his lightsaber in view."

I love alternate visions, and this dovetailed with my own ideas about 'what if' in SW. This version shows Anakin wearing an Imperial interpretation of the various Sith influences around him. It has many elements of all the Sith costumes we've seen in the movies.

Note: Original pencil drawing and a detail closeup of the face are included in my corresponding sketchbook blog http://www.swagonline.com/node/5216

As the admin for SWAG, I love having the bonus of being the first to comment on truly AWESOME pieces. This is amongst them, consider it featured.

(and welcome back pete!)

Man i love this pic i also am a big alternat visions fan check out star wras iffinties nh, esb, rotj.all r nice I like esb my self. As always thank you to the artist.
Wookiedave

I'm at a lost for words... it's just wow. Thanks Pete, I thought it would never be picked, and here you've made it better than I could of imagined.

I LOVE that pattern and its colors. Amazing job.

Very nicely done! He's very regal, yet very Vader. At first glance I thought it was supposed to be Luke. You're impression of an older Anakin really makes him look like Luke's father.

This is amazing. I didn't request this though, I think you mean Thespius. Once again Great Job though, he looks just like an older anakin.

Doh! I looked at the wrong post for the name! So sorry Thespius. I can't seem to edit my original post, so if an admin would care to hack in and correct the name for me, I'd be grateful.

And thanks for the comments guys. Feels good to be creating something again. I really enjoyed this. The subject really did the trick in inspiring my interest again.

Excellent artwork and a job well done. You are good.

No problem, I used this to pitch the campaign I've been working on to my players, and it was a hit.

Agreed with everyone...hehe...is he evil?