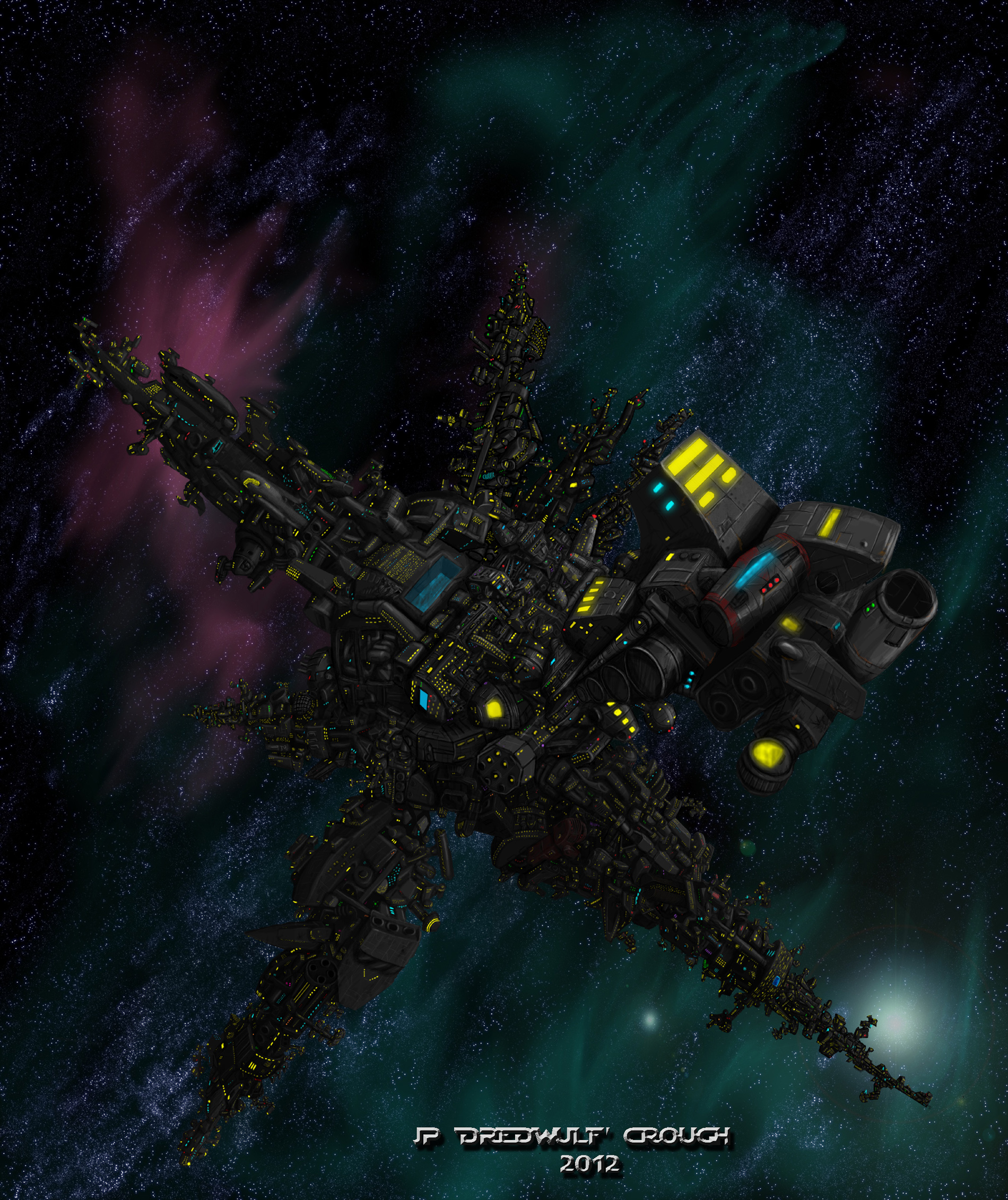 Motley station is a composite space station in the region of planet Rattatak on the edge of the Unknown Regions that border the Padishah Empire. It is not tethered to any specific gravity well, rather it is positioned in deep space and maintains its station with specifically tasked reaction engines, and a small flotilla of tugs when necessary.

The station is mobile, and has been moved in the past to position itself along advantageous approaches but is not hyperspace capable without EXTENSIVE preparation.

The space station is made up of many hundreds of hulls of space ships, attached together in a permanent fashion.

The station began as a Morghul pirate hideout, built out of the hulks of captured vessels. Eventually the pirates extended membership to other races, and the new pirates began to bring captured beings back as slaves and mates, slowly changing the demographic of the place.

By 350 BBY the pirate element was in the minority. The station was a primary haven for smugglers, and fugitives, as no official hyperspace coordinates existed for its location.

By 230 BBY Motely station was by far the largest group of sentient inhabitants in the sector, excluding the planet Rattatak itself.

The main heart of the station are three Heliophont-GC cargo carriers, each one a cylinder almost a kilometer long, used for deep space transport of bulk materials. In the belly of these craft are the main factories which produce the basic essentials of life on the station, the primary power plant, the life support systems, the station's primary shield generator and the fuel stockpiles.

Arranged around these central structures, the other ships have been attached. The oldest ships are unrecognizable, having been patched and rebuilt over hundreds of years. The central area is clustered densely, nearly hiding the three massive core cylinders, but as the structure sprawls away from the nucleus it tends to thin out, creating an almost snowflake effect of radiating tendrils.

The ships were positioned and attached to the whole without a collective plan, creating a haphazard arrangement. In recent years attachment of a vessel to the station requires the permission of the governor, whose staff assesses the impact to the station as a whole and determines the potential power drain and whether it will be inclusive of the stations' shielding.

The station has one public main hangar, which can accommodate several dozen mid-sized transports internally, for atmospheric repairs, or for bulk loads and unloads.

There are also dozens of lesser hangars built into the sides of larger ships, or operating in a clamshell fashion. These are privately owned, and docking fees vary.

One of the ships attached to the core is an old fighter-carrier, which holds the station's official fighter complement of 100 or so mixed star fighters.

There are also many dozens more docking points. These are often for the inhabitant's own ships, but many are for public rental. A ship of any size can dock with most of them, provided they can maneuver in to line up their hatch with the docking port.

The interior of Motley station is more complex than the exterior, due to its haphazard construction. While many beings find the interior of any large ship confusing, imagine vessels fused together at seemingly random points, often not oriented on the same axis.

Most ships retain their own artificial gravity plates, thus going from one ship into another might be accompanied by a gravity directional shift, relative to the individual. Climbing up a ladder through a hatch, one might find themselves upside down on a ladder facing the floor. Signs and extra handholds and safety cables are usually strung up in situations like this.

For those ships without their own active gravity systems, the gravity is usually weaker and pulls in the direction of the gravity of a nearby ship. Thus individuals might find themselves walking on what was originally a wall or ceiling.

Ships on the outer edges must have passage to the central structures, thus there are main travel corridors that run from the extremities of each arm through to the central. There are arterial passages that connect all the smaller ships to these main access corridors.

Travelling the main passages can be tricky. The routes are usually marked, but the direction can change easily. Unless one is used to travelling a particular route, it is easy to get sidetracked.

The arterial passages are even less reliable. Although mandated to exist, they are not always maintained. A passage that routes through a smuggler's apartment (a converted YT transport for example) might come in through what used to be the escape hatch, and pass through what was once his main cargo hold, (a narrow squeeze since he has put up privacy walls to maximize his own space, and keep strangers from having access to his living area) and then go down the ramp of what was originally his boarding ramp, into his neighbours craft, the entry point to which comes right through what used to be the cockpit of his vessel, now totally stripped of machinery, (but maintaining a viewport with an excellent view of another ship's hull several meters outside the canopy.) The route continues through his main living room (his personal items stay locked in his cabin) where he is having a loud sabacc game with several rough looking characters, and down a ladder that used to lead into a gunners well, but now comes out into what used to be another vessels refresher stall...

There is no reliable census of Motley station, and most inhabitants are semi-transient, but estimates point to over 14,000 beings on the station at any one time.

Motley station is directed by a 'Governor'. Due to its importance as a blackmarket trade center, and the revenue generated by all manner of illicit enterprise at the edge of known space, several major crime syndicates have appointed bosses to reside and oversee activities.

These bosses form a tentative council of sorts. The bosses decide who should be governor, and can depose a governor if required. Fighting on the station is of course punished, and the council has access to an astounding pool of talent in that regard.

The last major fight on the station was 78 BBY. One whole arm was demolished and several hundred beings were killed in the resulting explosive decompressions.

Points of interest:
In addition to being an out of the way hangout for some of the galaxy's scum and villainy, Motley station has some interesting features.

Auction pit: A slave trader's oasis. All manner of beings are bought and sold here, many destined for Rattatak's Cauldron gladiator area.

Black Void: A rating 5 Cantina, popular among the workforce of mechanics and engineers that maintain the station's vitals.

Ranphyx's Last Meal: A rating 4 Cantina that serves food as well as drinks.

Grommet's: A rating 2 Cantina. Despite the non-fighting regulations, lots of knifings go on here, and remain unreported. It is rumoured that bodies are routinely jettisoned from a chamber in the back.

Siven Hirlyksin: This personally owned partition boasts one of the larger personal hangars. Siven is a Duros mechanic of fine skill, who is so booked up, he rarely has any free time. Has no desire to cheat his customers, since he is on first name basis with the most notorious scum who pass through, but he will make room in his schedule for those that offer to pay a higher premium. He has four others working under him, (in addition to a dozen specialized droids) his son, daughter, a skilled ughnaut, and an apprenticed rodian.

The Gallery: A portion of the structure that was built out of an old luxury starliner. The chamber that used to give passengers a marvelous view of planetary bodies through the giant plasteel dome in the floor now gives a marvelous view of the stars and the nearby nebula. One of the few decidedly wonderful/romantic locations on the station. The dome has been patched a dozen times, creating blurry areas in the transparent surface, but it is mostly flawless.
The Weapons Locker: A weapons shop, dealing with all manner of exotic firearms, blasters and melee weapons. Very rarely has more than one or two of anything in stock, and tends not to have any of the more common variety.

Very neat piece dred... kind of has that babylon 5 feel to it... Very cool ship... and station

WHOA. That certainly is... motley. And completely impressive!

Let me know if anyone's player characters ever travel here in their games. I'd love to hear it. :D

ASOK!!!! Get this pic up on your SWAG group over on devianart, dred has it up in his gallery!!!

This is fantastic, image and concept combined!! I am actually purposefully NOT reading the entire description, haha, in favour of forwarding this on to my GM with the hopes that this place can appear in our current campaign. (I am the biggest sucker for in game 'surprises' like you wouldn't believe. I hate knowing too much about a situation before we hit it in session!)