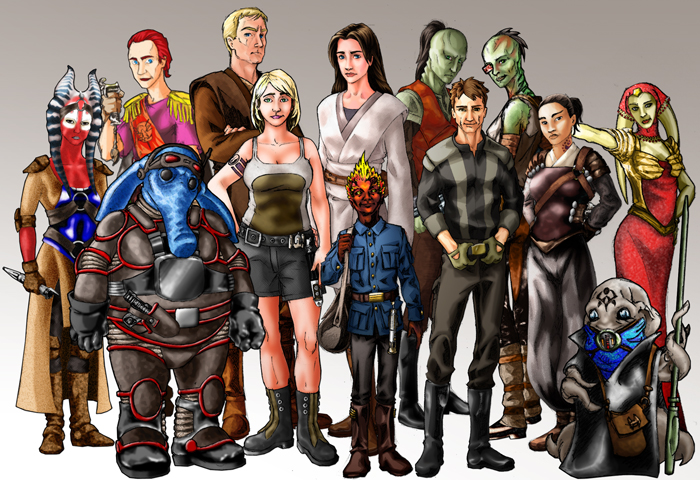 Here's our RPG group right now, plus several NPC allies. Names of Player characters have been bolded in the list.

Back Row, left to right: Pym Saalit, a young Togrutan Jedi who was swayed by her corrupt master's influence and met an untimely end (and wouldn't have survived to be in this picture, but let's not get technical); Dake Starkiller, a Tapani noble with burgeoning Force abilities and even less developed fashion sense, James Tarkin, a distant relation to the infamous Tarkins, Jam (as he is called) is improving both in physical talent and in finding his place in the galaxy; Layna Taresh, Jam's cousin, is a recently knighted Jedi, and pilot of the Jedi Shuttle Cormorant; Anox the Falleen struggles to find his place among the crew, and even runs away at one point, leading his fellow Jedi (as well as evil people intent on having what he took with him) on a hunt around the galaxy; Xaori is Anox's Falleen girlfriend, met during his travels aboard the salvage vessel Redemption; Yo'landa, one of Anox's earlier romantic interests, is a Twi'lek girl who left her job as assistant to the magician Enygmus the Great and ran away with Anox.

Front Row, left to right: Wyler Nabb, an Ortolan ex-con who finds himself in more trouble than he'd like; Miranda Taresh is a late edition to the Cormorant crew, and while she would like to stay aboard with her older sister Layna, their mother insists on her returning home until she can clean up her act; Fennfiar is a young Plamennik who has always dreamed of being a Jedi and is learning that such a life is fraught with unimaginable peril; Noa Saar is a Jedi Master and captain of the Cormorant, leading his young charges on the path of the Jedi; Lanzana Ou is the most laconic of the crew, but what she lacks in social grace she more than makes up for in martial skill; Hou'eck'k is a Gree sevark whose atypical wanderlust drew him to Anox and, by extension, those who associated with him.

Sadly, one ally is missing from this happy reunion. One Negas Fritstan, a Besalisk, was never drawn, and the stock species image from The New Essential Guide to Alien Species was always used. So imagine a big four-armed mechanic standing in the back, and you'll get the idea.

Wow, This is so darned awesome, I don't know where to begin! Looks like you had (or have) a very successful and intriguing campaign! :D

Did you do each and every individual drawing then composite them together? That is a very cool idea!

That's the most succint, efficient, but still accurate description of the characters in that campaign that I've ever read.

For the others reading - we're quite spoiled to have Evan as our official campaign artist. As a result, we always have very nice images to put on our character sheets, and new pictures to help us visualize each adventure. We push him pretty hard, but he always delivers, and we appreciate it a lot.

For the record, yes, each portrait is done individually, and this is the resulting composite. The original six were Fennfiar (whom we call Fenny, but he doesn't really care for that), Layna, Jam, Noa, Lanzana, and Anox (and I think they appeared in that order). They're still considered the primary PCs in the group, with others making occasional appearances.

We employ a rotating GM system, where we each take turns preparing and gamemastering adventures. It's the only way to keep things going with the busy schedules we all have. We only manage to play about once a month, but we fill in the gaps in between with stories, pictures, or just talk about what our characters are up to. That combination has indeed resulted in a rich, satisfying campaign experience, with a variety of far-flung characters - as you can see!

That's right, a Gree. Only the second Gree to grace SWAG, as a matter of fact.

Pretty sweet. They seem to fit so well together, considering that it's a composite. Exceptional work. Your group is very lucky.