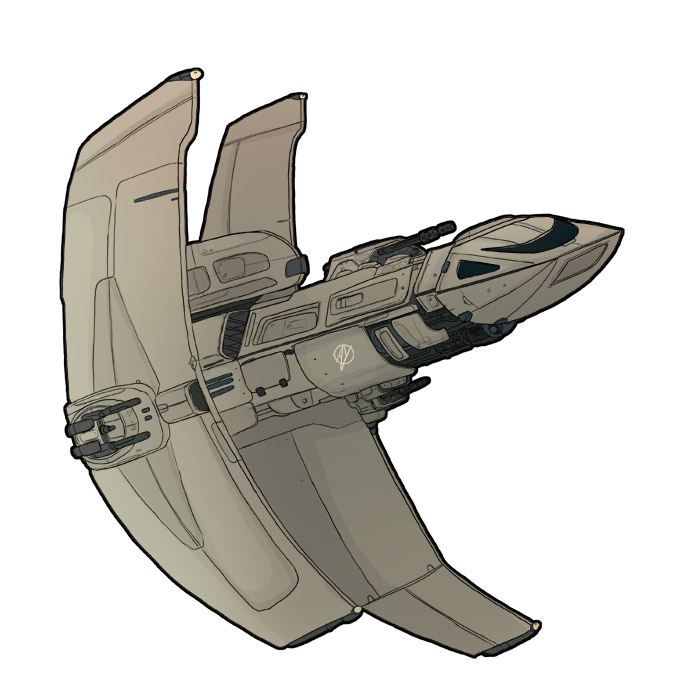 The Wordbird, a down-and-dirty Citadel Cruiser used by the folks in Tusserk's gaming group.

That's a good looking ship. Nice work Asok.
Also does it's name have anything to do with "The bird is the word"? Because, frankly, that would increase it's awesomness by about 5 levels lol

OH YES!!!! The Wordie!!! That's our ship alright. :D Dang you do good ship work, Asok. I am so pumped to show this to the group next week.

(Just showed it to GM, who at first grinned and instantly recognised it as the Wordie, but then shook his head and sighed; "I WISH you guys had come up with a better name for it!")

Anarchangel- sadly, the name did not actually come from the song, but rather the squad's hopeless inability to make decisions. At one stage someone said; "Alright! Millenium Falcon. EbonHawk. All we need is a word and a bird!" So after throwing around such ridiculous things as 'Bicentennial Partridge' and 'Fortnightly Stork' for a while, we settled on nothing and used 'WordBird' in lieu of an actual name when referring to the ship.

We never actually did come up with another name for her, and now the thought of naming her something with a bit more, ahh, dignity just seems kind of blasphemous!

(PS. Your signature painted to the side of the ship is officially WordBird canon now, Asok!)

That's it. My crew are buying a new ship and calling it the fortnightly stork! :)

That is the single greatest origin story of anything ever, Tusserk. My roommate and I had a good laugh about that!

Nice looking ship. It makes me want one to fly around in.

Yes, indeed. I want one as well. Do they come in dark green?

With enough credits, she'll be any colour you want, I'm sure! ;)

The Wordie started out a lovely yellowish orange, then was yellowish-orange-patchwork after a bunch of panels were blown off... she was a hot metallic blue for a while, and has gone through a couple of shades of 'ordinary' now that she's a very wanted ship. She's hard to take out in public these days.

Just showed this off to the squad and they were greatly impressed!! They're super happy to actually have a GOOD illustration of our little cruiser, especially Lonar's player. Upgrading her was always one of his little projects. :D

Nimeq/Cora's player was very enthusiastic about the turbo laser mounted on top there, too... Nimeq looooooved that laser. And Klopan's player just admitted that he miiiight have had Surfin' Bird on his mind when he was making the whole 'bird and a word' suggestion in the first place... so there you go, Anarchangel!