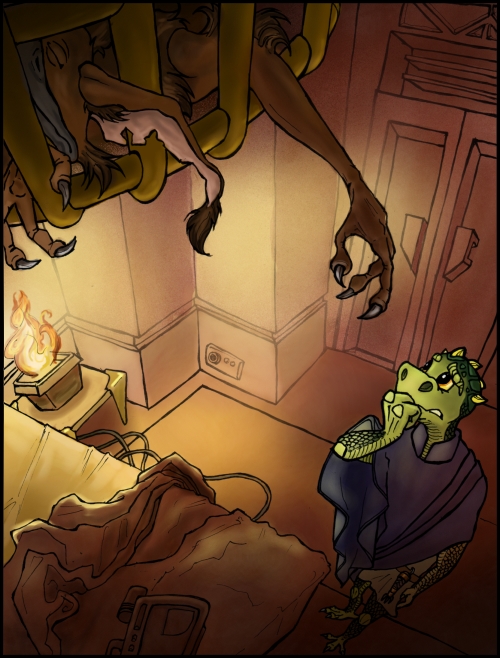 En route to Illum, Tusserk, Frank and Toaster (whom Tusserk continued to call by his nickname, despite the Shard's insistence that his new name and title, 'Jedi Master Shan Xe', be known and respected) received some distress beacons coming from Metellos. Toaster leapt out of their ship to investigate the first call, but before Tusserk could plug in the co-ordinates to pursue the second, he received a vision in the Force. Well, more than just a vision- he got the full sensory experience, and the knowledge that his Master was being tortured.

His Master, who he hadn't heard from since he uttered those ominous words- "I'm going huntin'!" in response to the news that Klopan had fled the Squad.

Tusserk deliberated for only a moment; the echoes in the Force were still strong enough that he could track his Master, seek out the source of that terrible pain, but he knew it wouldn't last. He turned his ship around, left Toaster to deal with both cries for help coming from Metellos, and let the Force guide him at full power.

He found himself on Korriban.

A bit of investigation pointed him in the direction of the quarters of a small and rather secretive cult, though when he finally reached the place he found nobody there, and no sign of his Master. He knew Kieran was still alive; he could feel it, but was at a total loss as to how to continue tracking him. Prying further through the rooms uncovered a few disturbing things, including a Kowakian in a cage that had... hadn't been in the land of the living for a while.

Further on still, Tusserk came across the Spirit of Trys. His old ship. The one that Klopan had stolen. And it was about then that he wondered whether or not his Master was in comm range...

You guys have the best stories!!