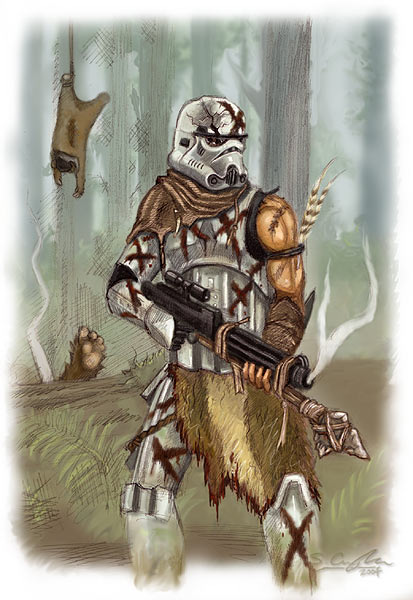 During the Battle of Endor, a patrol of Imperial Stormtroopers were caught in an ambush by a particularly savage tribe of Ewoks. Only one lone Trooper escaped alive, surviving a direct hit to the helmet by a catapulted rock.
With his helmet’s commlink destroyed and sent slightly insane by the sight of his comrades brought down by a swarm of rock-lobbing teddy bears, this Trooper went out for revenge.

After the Battle of Endor ended, reports came in of whole Ewok villages decimated and tribes massacred, yet even with New Republic assistance, the culprit was never caught.

For generations to come Ewoks would tell their children that a 'White-Hunter' would come for them in the night if they didn't behave...