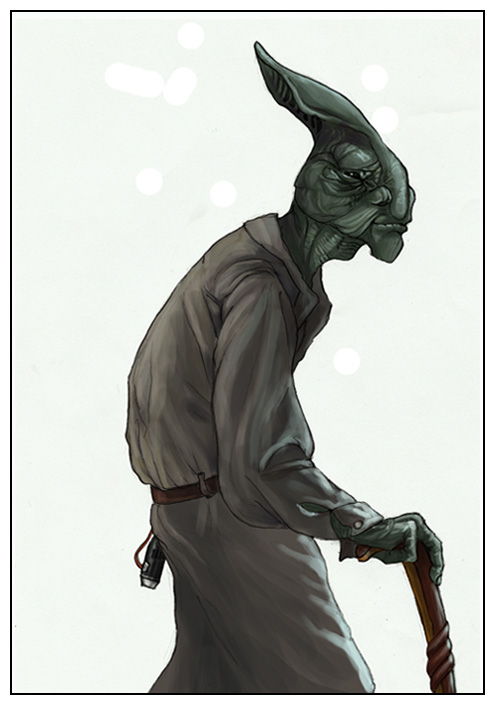 Another member of Anarchangel's group! Their second in command, an elderly Vurk mechanic named Jodo Ruul. He has a robe with a belt on the outside because he's just that cool. And gives him easier access to his tools. Unfortunately it also makes it looks like there's a lightsaber hilt dangling there, really it's just some... mechanic... thing. And he has a cane, though he doesn't actually need one to get around, but I bet sometimes he likes to put on the 'arthritic old dude' act anyway. To guilt people and get what he wants, maybe?

WOW... he's so real looking I think he almost jumped out at me.

super very awesome coolness super wonderful neat and outstanding. Oh, I like it too

Whoa, this is great! Really capturing a character.

This is wonderful Tusserk. Even better than I had imagined. You nailed the elderly look, which I imagine had to be hard.

p.s. The cane's really just for battering people (the crew) over the head when they get out of line.

p.p.s. I'm not really sure where you picked up that he's a mechanic.

Good job! This is good work

Much as I'd love to claim some fabulous character-based psychic ability... you mentioned his being a mechanic in the original request. ;) Glad you like it though, Anarch, I hope his player does too!