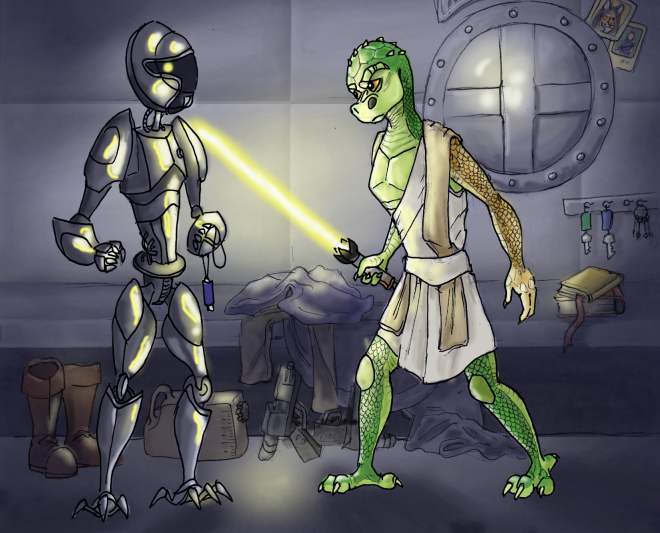 The Past in His Hands

So, eventually Toaster was given the opportunity to learn everything of his past... courtesy of a highly classified data disk that Lord Vader managed to obtain. When Tusserk learned that Vader had offered to make a deal with Toaster in return for the information, he strictly forbade the droid from any further contact with the Dark Lord, sensing that absolutely NO GOOD could possibly come of it. Besides which, Tusserk completely trusted the advice of Jedi Master Umwaw Naduun, an Ithorian whom the squad had gone to previously for help-- who had stated quite firmly that Toaster was in no way ready to learn his history.

But the droid was stubborn and headstrong, utterly fixated on discovering who he was and not at all content to wait... and sure enough, when we did all finally go to meet Vader on neutral ground to broker some kind of deal, the first thing he asked of Toaster in return for the information was to slay Tusserk on the spot.

Thankfully this did not happen!

One epic battle later, where it turned out that the Vader we had been speaking to was actually the exceptionally well disguised droid Proxy, and where we ended up leaving (amongst others) Captain Rex unconscious on the battlefield in his underwear, the squad ended up safely back on the ship, and Toaster had the data in his possession. The session ended on a fine cliffhanger, with Tusserk very very very VERY much not wanting Toaster to load the information into his system...

Never....Never piss of the one holding the lightsaber.

I really like the way the lightsaber seems to be the primary light source.
Well done, Tuss.