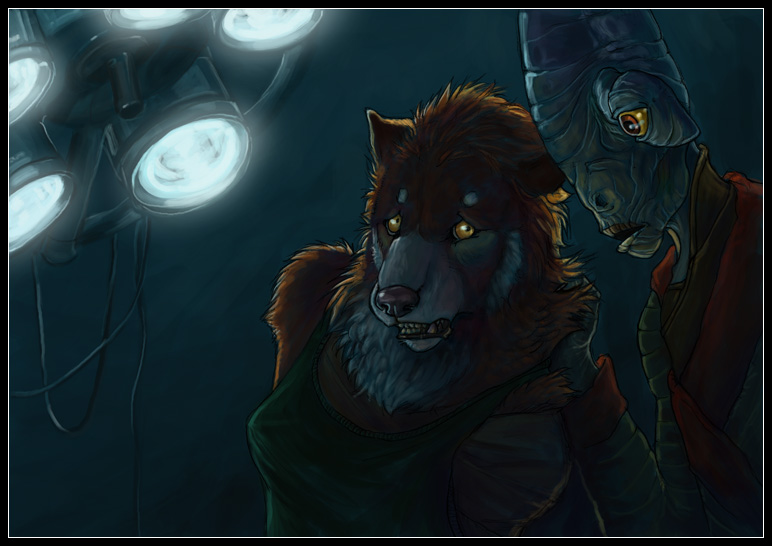 Jak didn't know how long Rakata had been standing there, and she tried not to think about it. That creepy-ass alien scared the absolute pants off her, and it was fear alone that kept her in place, near frozen to her seat, unwilling to make an exit from the lab for those few moments she'd have to bring herself in closer proximity to Rakata to do so. Rakata, bloody Rakata! Only minutes earlier the Shistavanen had been meeting with the rest of the unit over the dinner table, furiously arguing that civilians like freakin' Sad-Fish-Rakata aught to learn to follow orders, or leave the ship altogether. She hadn't even been alone in her opinion, though of course she'd been the loudest about it, much as it killed her to speak in conflict with the General. And then that damn chicken had started mouthing off, talkin' about how she smelled, like that had anything to do with anything! Who the frak would want to have to sit through that? But now, alone in the med lab with Rakata hovering in the doorway, staring, staring, just standing and freaking staring like she always did, Jak found herself regretting storming out from the meeting. Gritting her teeth, she shuffled her seat a little further down the bench, bowing her head as she resumed her reading, doing her absolute darndest to ignore the presence behind her. Ignore it, ignore it, and it will go away. Her insides turned to ice as she felt Rakata's hand close around her ruff and pull her over. She felt Rakata's breath on her cheek. She wanted, desperately, to call out, to reach for the comm, she didn't want to be alone with this thing, but she was scared, more scared than she'd ever want to admit, scared to the point where she'd rendered herself immobile. Rakata leaned over, and whispered into Jak's ear.

You tell such wonderful stories with your work. They all fit so nicely together. Sort of beyond saying this is good or awesome. You don't just say what happened in your game, you convey the whole experience. Thanks

I love the look on Jak's face. You really are great at conveying emotion :)

How do you turn these pieces out so quickly and so amazingly detailed?

That Rakata skin is just so perfect. Love the colors!

Dark and ominous! There is something so creepy about the cold, dead, emotionless look of fish that would lead me to distrust this guy too ><