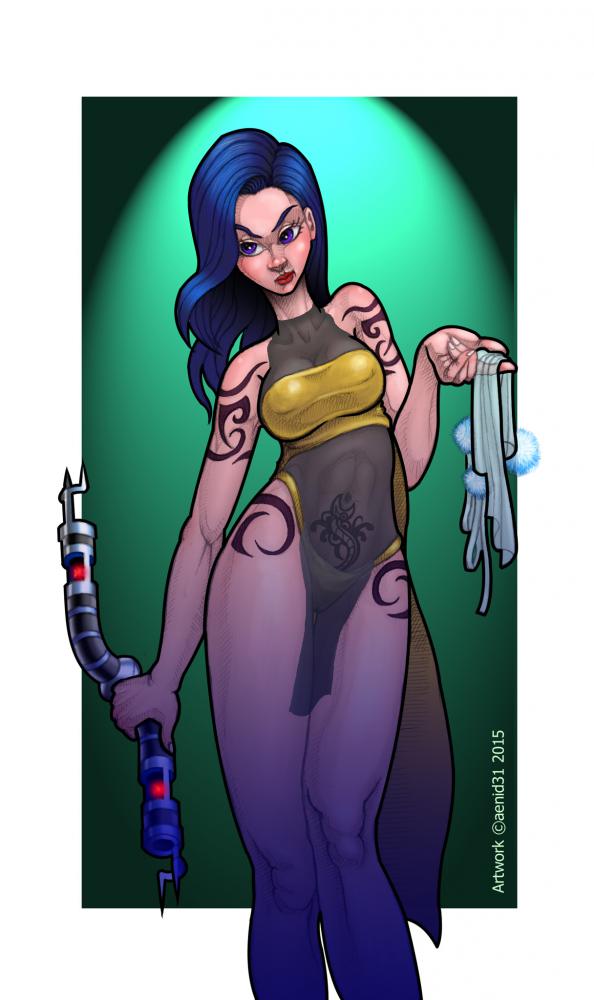 A character request by Kaelyn of a Zeltron Jedi recovered and revived by an Arkanian Scientist. He requested she have Maorian tattoos on her shoulders and hips as well as a tribal dragon below her navel. She has black hair which I tinged a bit blue due to the Zeltron pheremones. Because of her current appearance, she is never taken too seriously as a 'Jedi'.

In trying to visualize the persona, I thought up a possible story of the Zeltron Jedi's awakening:

"Well.." The Arkanian Doctor sighed. 'She is almost ready for resuscitation' he thought as he scanned through the genetic re-sequencer noting the modifications needed to some damaged structures as well as 'enhancements'. Jedi or not, I'm sure she will be appreciative of saving her life after finding her in deep cryo-stasis on that damaged lifepod. Though not sure, the dual ended lightsaber in the pod gave her high probability of being one of the throwbacks of long ago. Who knows what thanks he might receive from this revived, now enhanced woman?  The older chamber only had a facial viewport, but he knew from experience what his genetic restructuring could do. His pulse quickened and eyes glazed at the thought of seeing fully, his find at last!

He began the resuscitation and saw her eyes go from REM state then flash open. Using his best bedside manner, (as Jedi could be quite violent) he calmly explained her situation asking her to relax and rest for 20 minutes as her body once again regained a fully nominal stasis.

The Doctor was dissapointed that she did not relax or sleep. His subjects eyes scanned about taking in what she could from within his laboratory.

All the vitals were within normal parameters. He moistened his lips and he toggled the six latches to the mini cryo-stasis chamber coupled to a myriad of connections from his laboratory; thankful that the manufacturers had the forethought of making it a miniature surgery suite, possibly for a medical vehicle.

A hollow sound as the slight vacuum from within took in air and the armature lifted the sarcaphogus-like cover. The Jedi (he now noted she was a Zeltron!) almost immediately sat up and swung her legs over the side just a bit clumsily.

Something was not ..'normal'. Though in deep sleep, the Zeltron Jedi distinctly remembered the arc of her limbs and weight of her body. Trying to stand, she felt off balance somewhat. The low maintenance 'bob' she preferred to have had grown out to beyond shoulder length.  Her undergarments felt 'tight', looking down...what, WHAT??...She looked up and glared intently at the one feeble man holding a small parcel, staring, eye's wide open, mouth agape.. she sensed, surprise and ..arousal.

She willed her double edged lightsaber into her hand, unactivated.

"What have you done." She said in a calm yet demanding demeanor.

"Your life pod was damaged. He stammered. The chamber malfunctioned and had damaged parts of you beyond repair. I repaired the damage at the genetic level and regrew it.. here, this is for you.. You, ..you're Zeltron.."

There was a nervous shine of sweat on his forehead as she took the parcel.

"You couldn't reference the flight recorder for my original appearance? why ...this?" Her arms indicating her new appearance, her expression showing suspicious sarcasm .

She opened the parcel and contained within was a very thin and sheer outfit, the only opacity were three tactically placed, fluffy 'pom-pom' balls'.

Nicely done.  I love everything about this.  I especially like how the simplicity of the lightsaber design still carries a sense of uniqueness (though I am kinda curious as to where on tha outfit she could carry it ;p).

Hey thanks!  Truth be told, I wanted to work a bit more on the lightsaber as I had on my Miraluka Jedi request but was hyper accelerated when I saw the postings of the new release previews :)

I'll probably improve the look as the weapon now looks more  like a WIP.

..oh, she's just come out of stasis and is in her undergarments to show the tattoos as per request.

LOl,Love it!  Just want to say thanks! It's perfect

Sensual! Cute face and lovely colors on this one!

Interesting!!!!  Excellent job on the coloring and the expression on her face.