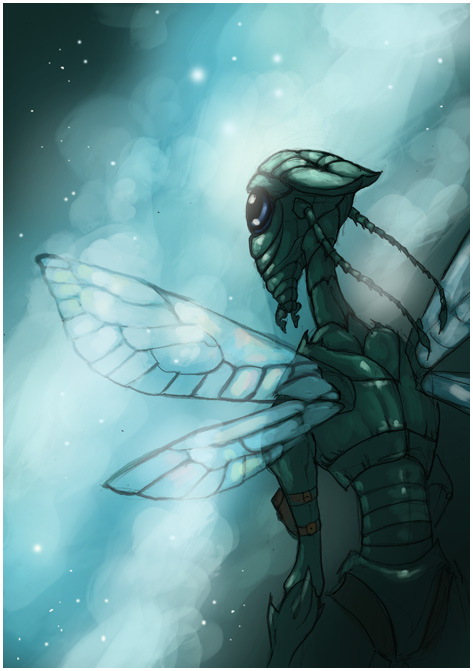 After reading that apparently, on occassion, Verpine can have vestigial wings, the player of Fix't, our resident Verpine, decided that he'd rather like that aesthetic for his character. So after a few skin-moults he in fact grew a rather lovely looking set. (We imagine that much like regular Earth insects, sapient insectoid species also need to shed their skins to allow for growth; therefore every now and again the crew of the Jaunty Owl finds a creepy hollow Fix't 'shell' sitting around the ship.)

His wings aren't really seen terribly often, since Fix't pretty much lives in his power suit, buuuut I've been meaning to draw them forever.

...I feel bad that while the whole drawing is undoubtedly great, my favourite part is the sparkly bit going through the middle with all the glowy spots

HAHAHAHAHA OMG what is that

that is the result of a google image search when you type in the words "OMFG .gif"

i have absolutely no idea what it's from XD

I really like the wings Tuss.  Very well done.

The wings and the antenna are so very well done.