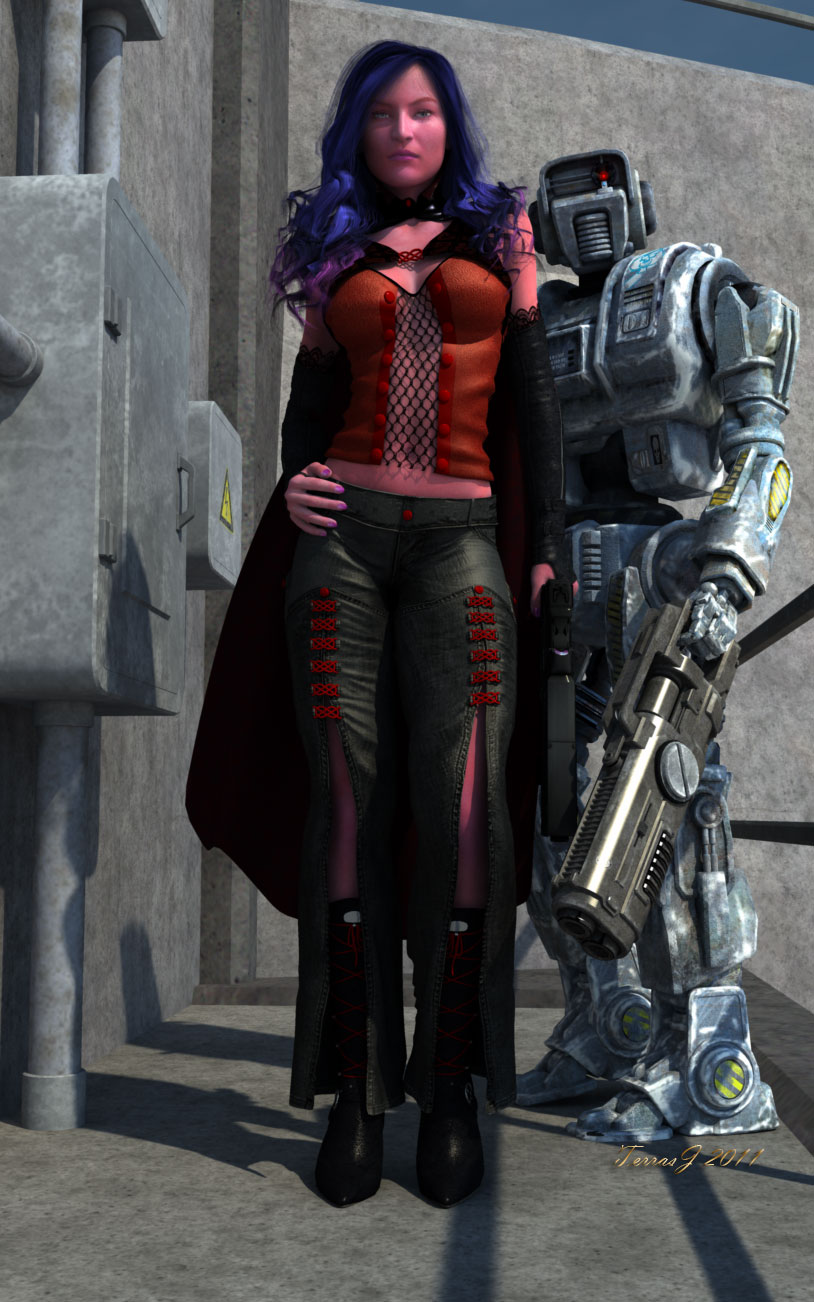 Here's another one from a while back I never got around to submitting here...

Profile:
Agent Ynnara is a middle aged highly skilled Zeltron in the arts of persuasion, seduction and deception. Ynnara is the agent you need When you want sensitive information found, or make a person go missing permanently or temporarily.

Notes: Ynnara's medical scan has revealed some unusual properties. She has a slightly higher midichlorien count than normal. While Ynnara claims to have no working knowledge of it, she has by accident demonstrated use of her abilities to inadvertently save an agent's life. Despite the "No personal relationship policy" within the agency, the two have seemed to become emotionally attached. Something of which is proving to be an enigma in itself. Sofar for the past 20 years of service, this enigma has proved at times to be beneficial and moderate issue. The pair has been and will continue to be closely observed.

Personality:
Ynnara is first and foremost a Zeltron, her species promiscuous by habit and nature. Ynnara's well suited to a variety of insertion missions, and has steadily proven herself reliable in accomplishing her designated tasks. As long as Ynnara has regular contact with agent Mikail, she remains to be calm and stable, maintaining a professional seriousness as an agent. It can be speculated their continued regular contact serves to keep the typically aloof Zeltron nature centered. Likewise, Mikail's personality profile seems to have beneficial results.

Ynnara's Partner: 5T-1X "Stix"
Like numerous operatives within the Agency, Ynnara is partnered with a droid enforcer. This particularly aged veteran unit from some long forgotten battlefield is designated 5T-1X or "Stix" as Ynnara calls him. Stix has been assigned to Ynnara, not just for protection but for numerous surveillance reasons. Stix is never far from Ynnara, and is handy when for some reason Ynnara's charms prove ineffective. Stix's personality can be considered to be dull, quiet dim-witted and sullen most of the time. Often he will just flash or strobe his glowing red photoreceptor in response. Worn and tired as Stix looks and acts the part quite convincingly. Plodding slowly a block behind Ynnara; he can startlingly stir to life in an instant like a droid fresh off the production line. Blindingly fast servos, and equally strong, Stix has proven to be quite wise and cunning for an otherwise decrepit old relic.

About the Agency:
The Agency is a shady organization that nobody really knows much about. Except when there's a problem needing solving or a sensitive matter taken care of, The Agency is the number to call. The Agency provides an operative specially suited for the task, dealing with the unpleasant business so you don't have to. The service doesn't come cheap, but the results are always professional.

Ynnara's recruitment into "The Agency"
The majority of Ynnara's life from childhood through adulthood rarely felt the warmth of daylight. Ynnara's childhood consisted of growing up in Coruscant's lower level poverty slums. Ynnara grew up quickly, having to look out and fend for herself. Ynnara had no father or any known family relatives. Her mother was almost never home, busy working overtime at the seediest tapcafes in the area, to sustain her substance abuse problems. And to nobily try keep her daughter from walking the same path. At the young age of 16, Ynnara was notified by the sector precint to come in and identify a body - an unidentified Zeltron Jane Doe was found deceased; cause of death: O.D'd. Ynnara didn't have a whole lot of choice, slipping down a familiar slope in order to pay the rent.

Becoming a young adult, Ynnara was able to at least avoid the heavier narcotics that had robbed her of the only family she knew. Alcohol was never a problem thanks her Zeltron metabolism. Her natural Zeltron wiles she put to good use entertaining the guests while reliving them of their cred chits. At age 25, unbeknownst to Ynnara, the wealthy shady patron she was showering with attention in the private backroom was on the Agency's hit list that night. The siege went down bad, the operatives were outnumbered 3 to 1, Ynnara was caught in the middle. In an effort to save herself and get out of the firefight, luck just wasn't on her side that night. One of the wounded operatives was heading in the same direction she was, drawing fire the whole time. They collided, and Ynnara got grazed by a blaster bolt intended for the agent.

Ynnara was stuck behind a few flipped tables, pinned by blaster fire from both directions. Thanks to the human agent beside her clutching his side. Frustrated at this point, and nothing to loose, Ynnara yanked the pistol from the agent's holster, reached above their cover and blindly squeezed the trigger repeatedly. One of the henchmen shouted out "That wench! She capped the boss's son!" Ynnara's actions had bought them a few precious moments she'd be able to use to make an escape - if it weren't for the wounded agent that clutched her wrist that very moment. Too late, the moment for escape was over. Blaster fire resumed. Maybe just as well, Ynnara grimly thought then ask the agent if he had any bright ideas.

The agent grunted in pain, notified Ynnara that the team was pulling out and they'd be dead if they didn't do the same. He then unclipped a cylindrical object from his belt. He simply offered a solution, as long as she helped him vacate the place once the grenade was thrown. The grenade went pop-hiss, thick smoke filled the air, and the pair managed to crawl to the rear exit with Ynnara's support. They knew the smoke cover wasn't going to last long, they'd have to act quick. As best as she could, Ynnara half carried the agent's weight through the maze of dimly lit back alleys until they reached a locale of ramshackle shantys often occupied by the homeless. The shanties were cobbled together multi-colored discarded sheets of duraplast and rags held together by strands of stripped wire clustered at the bases of the buildings towering kilometres high.

It wasn't until Ynnara found a dingy but empty shack did she have time to better asses the situation. Ynnara knew she was a wanted person now, her life was pretty much over; different circumstance, same fate. The agent was still hanging in there, but his blaster wound was creating its own share of problems. The agent, Ynnara hadn't realized until now - was quite handsome, if it weren't for the pained expression on his face. With a handsome toned body to match, once she helped remove his shirt to apply a few topical bacta synthplast patches to cover the burn in his right side. To make matters worse, it'd be several hours before he'd be able to contact the agency for pickup. Not that he could talk about the agency, save for mission protocol.

Problem was, few hours of idle chit-chat, the agent wasn't doing so well; but he was managing to just barely hang in there. The agent's medpack was severely limited, and there wasn't much she could further do for him than simply lay next to him and be there for him. Ynnara's natural empathy, pheromones, and memories of her mother had also created an interesting feedback loop that she and the agent had begun to share. From the close proximity and physical contact, emotionally they bonded somehow - they just didn't know it yet.

By the time an Agency recovery team located them and arrived, the medic was in for a shock. According to his diagnosis, the agent should've died from his wounds hours ago, but there he was still hanging on, clinging to life. Ynnara was brought back to the agency's HQ by insistence of the wounded agent for intel purposes. Soon as they were separated, Ynnara destined to a holding cell for interrogation and the agent to the infirmary, his life signs began fading fast. Piqued by this phenomenon, the medic ordered Ynnara back, but under close watch. The agent survived the surgery and a long dip in the bacta tank. Ynnara herself was put through a thorough med-scan during the same time. Most readings were within normal limits for a distressed young adult female Zeltron. Save for a slightly higher than normal midichlorian count.

Days later, the agent was on the road to recovery, with Ynnara constantly by his side. Extensive medical analysis later concluded that Ynnara had a latent ability, albeit very weak had kept the agent alive. A useful ability, but one that seemingly was only brought on by the extreme circumstance.

Ynnara was held for further examination and interrogation for what seemed an eternity. They probed and prodded her endlessly for any information that might be useful. Her only salvation was the agent who's life she saved visited her in turn to keep her spirits up. Little did Ynnara know it was all being observed, or that the agent had been talking to his superiors in her favor however; much of it has been regarded as under Ynnara's influence.

The time eventually came, Ynnara was offered a choice accept a role as an agent within the Agency, or to be set free. As much as Ynnara suspected, the Agency's meaning of “free” was to leave the building a corpse. Ynnara chose the former, moreso because of Mikail, she was emotionally attached to. To be without Mikail would be to suffer a painful slow death. Or succumb to madness and lethal narcotics her mother had fallen victim to. The choice made, Ynnara was soon after put through a long and intense training course, without Mikail's interference or intervention. Ynnara eventually passed, and accepted as an agent on probation.

Approximately twenty years later, Ynnara still serves the agency. Over the course of time, Ynnara and Mikail still find ways to get around the Agency's relationship policies when off duty. The bond that had formed when they had first met still runs deeply through them to this day.

I really dig the expression- that, and her overall pose, give such a clear impression of her attitude.