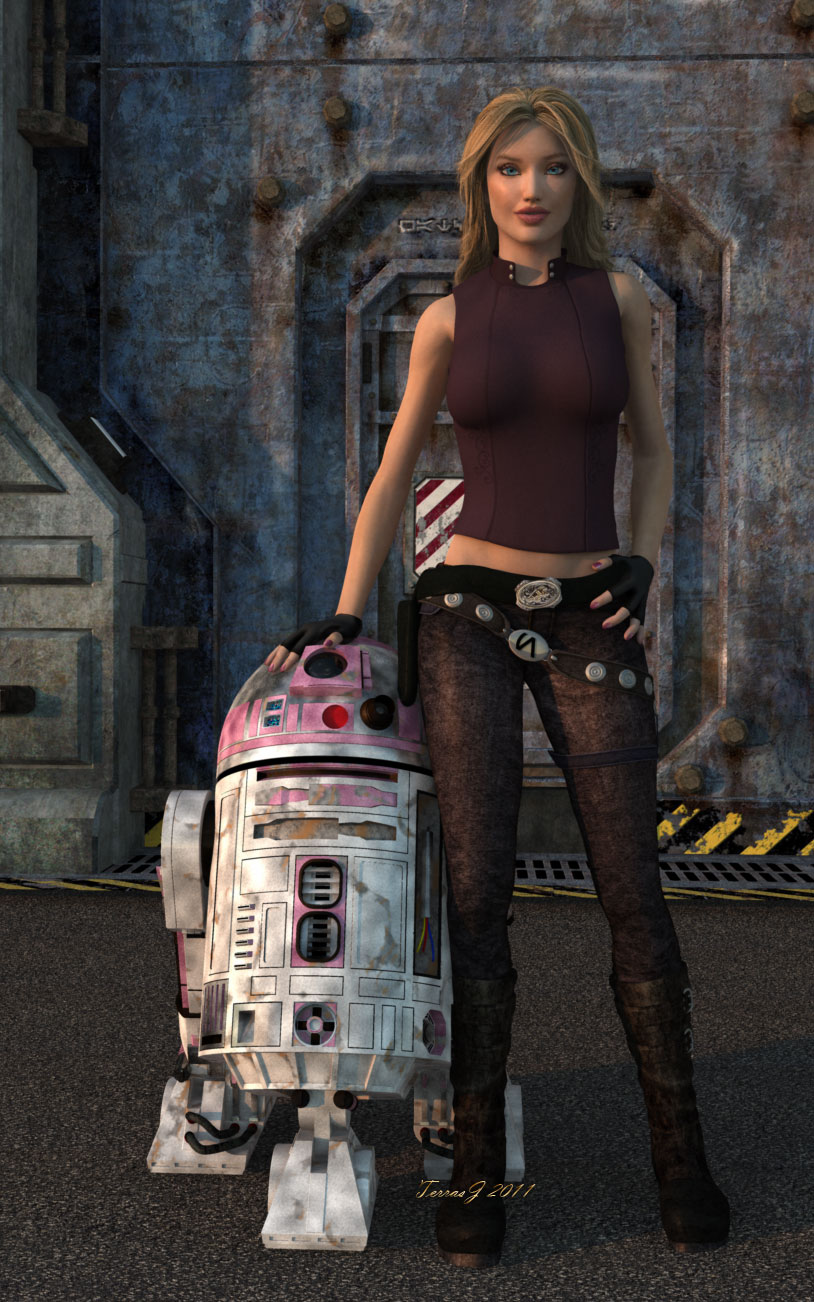 No postwork save for signature. Worn and weathering effects on the Astromech done purely in Carrara by me.

So some friends and I have recently started a new campaign. And with a new campaign comes new characters. So I figured I'd throw a request at you guys to see if you can put a face to my dashing/weird duo.

First there is Nikita. Pilot and amnesiac. Nikita (Nikki to some) is a human woman with almost porcelain like skin and light blonde, almost white, hair which reaches to about just below her shoulders. It was said at one point by one of the other characters that Nikita occasionally looks like a doll with a hard edge. "Badass" was another word used. Although that one was more Nikita's own interpretation of self. Whether or not it's actually true is still to be determined.

Her eyes are a steely blue color and she wears very dark mascara.

She'll wear pretty much anything but does like to show at least a little skin.

The only real piece of equipment she keeps on her at all times are her twin blaster pistols which she keeps in holsters on the back of her belt.

Other than that, feel free to equip her with whatever.

The second part of this request is actually more of a supporting character. "Zombie" is an SB-20 security breach droid (slicer that looks like an R2) that Nikita found while traversing the back alleys of Coruscant. The droid was randomly wandering around without any real purpose, plugging into any data port it could find, trying to slice just about any useless junk info it could reach.

The droid was beat to crap after being abandoned by its owner years ago. There were pieces falling off it, it was covered in dents, rust, dirt and even blaster burns and was obviously suffering from a damaged A.I.

Nikita just felt sorry for the pathetic little thing and took it back to her ship.

Zombie is white and dark pink with some black pieces but if you want to switch up the colors to make it look better then go ahead. I'm fine with any color.

At this point Zombie is very new to the campaign. Less than a week old to be honest. But I like the little bugger so much I thought I'd include him in my request.

You already know how much I love this but I wanted to express it publicly too.

What graphic program was used for this fantastic picture?

The price you pay for being one of the finest.