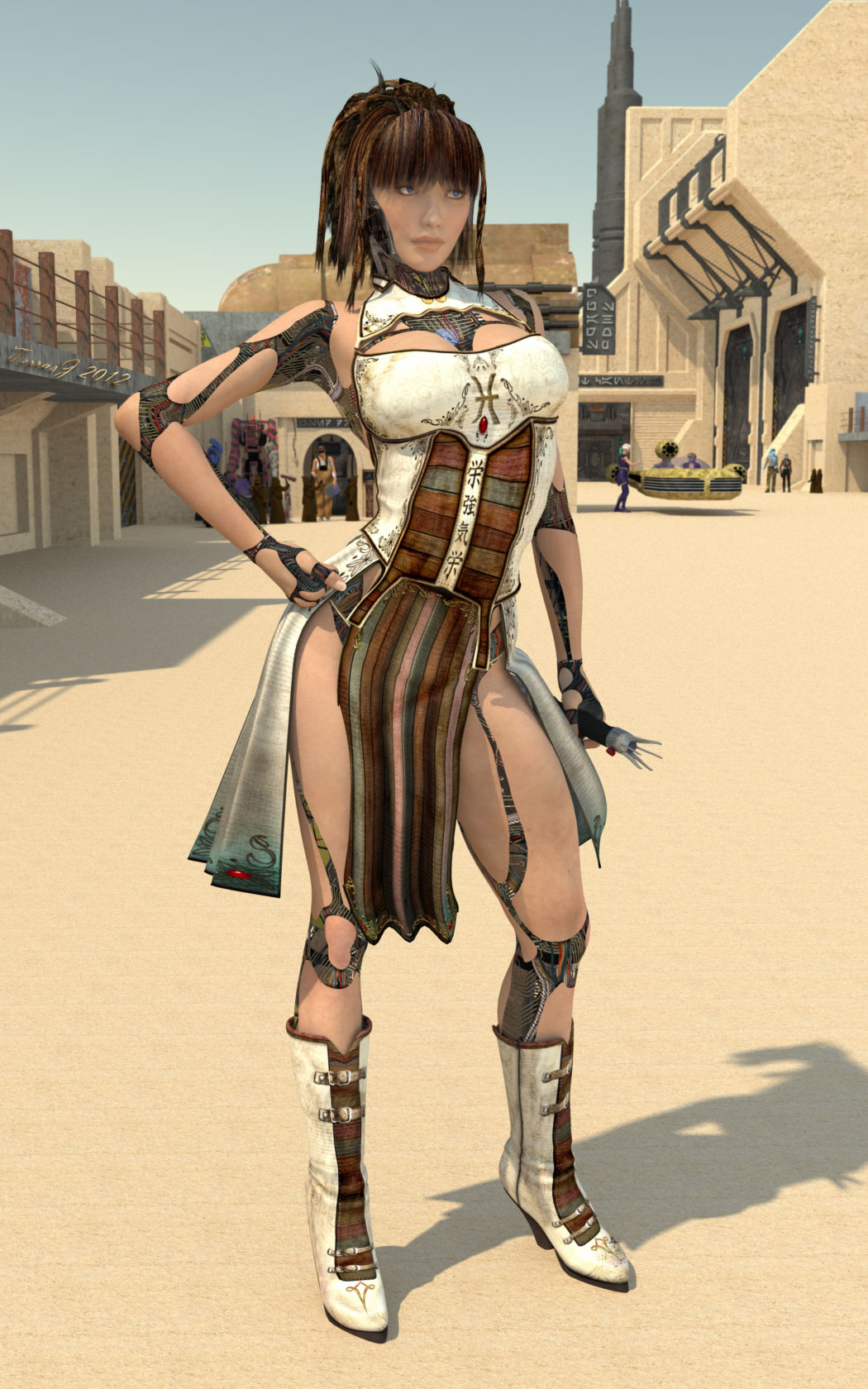 The Iron Knight now known as Tessla, a young Shard housed within the protective shell of a female Human Replica Droid.

This one is for you JohnGWolf. Your Iron Knights are always vividly creative and very full of character.

The birth of Tessla:

Many years ago in a dark alley way on the planet Narr Shada...
Force jumping up and down across the causeways and platforms of the kilometers high tower city of Narr Shada, a fierce lightsaber battle & light show ensued. A lone female gendered Iron Knight known as Khes fought valiantly against 2 Sith Marauders and a Sith Acolyte. Each equally skilled, each at a stalemate. A deadly game of dodge and parry, each waiting for a careless mistake or oversight to take advantage of and deliver a killing strike.

Khes belonged to a sentient silicon based species known as Shards, their bodies resembling oversized oblong crystals pulsing brightly with energy from within. Shards as a species grew in sedimentary clusters of crystals on their home planet of Orax. Upon their discovery as a species, numerous Shards elected to be housed within and "wear" droid bodies, much like clothing and mobility aids for a physically impaired human being. Shards could pretty much use any type of functional droid chassis, regardless of aesthetics. Khes' body was a modified Juggernaut war droid chassis, providing her with exceptional offensive and defensive capabilities, fit for a force sensitive entity trained in the ways of the Jedi. Khes' droid body had the advantage of being infinitely tireless, up until it's own battery cells deplete. Her droid chassis however, had already sustained some damage from the prolonged fight, but Khes could not give up. For she had a higher purpose. To draw and decoy the Sith away from a more precious target. Unfortunately, the battle was soon over. In the timeless moments as the Sith Marauder delivered the final coupe de grace, the Shard silently prayed to the force that her death would not be in vain.

In another part of the shady towering city, in some abandoned dark corner; a new spark of life was awakening. This spark was a tiny shardling, a crystalline silicone entity all to its own in uniqueness and diversity. The shardling, was a new growth formed and prematurely detached from the now deceased Iron Knight, and placed within a technologically advanced protective cocoon inside of an equally unique droid body.

This unique droid body per-se was different from the traditional approach and selection of Shards to use as mobile mechanical hosts. This particular droid host body was a Human Replica Droid of female gender. An outdated model albeit, with synthflesh for skin torn off in patches, beat up, grimy, abandoned, and left worse for wear. At one time, the Replica Droid was likely bought brand new as a rich family's house keeper, then traded off and re-sold to a variety of owners in less than reputable venues as the aging droid's worth decreased. Various modifications and features had also been added to the droid during its functional service. The replica droid had probably been at last stolen from some establishment, toyed with, dumped, and left to wander on its own until falling victim to self dis-repair and ultimately nearly drained battery cells.

The young Shardling within the Replica droid was shielded from the outside world in numerous ways. The Cocoon was an experimental prototype designed by Khes. Built to mask the contents within, to resist sensor scans, as well as potentially baffle and deter from being sensed through the force. The Sith had somehow learned of this, and had begun tracking her down. If further developed successfully and placed in the wrong hands, the technology could possibly single handedly tip the balance of power. As it is, Khes knew the research wasn't complete yet. Anticipating her own possible demise may soon come, she instilled and locked away the knowledge secretly within the Replica Droid.

The Shard interface created by Khes within the Replica was unique. Even with the cocooned shard installed, the fembot's core processing was kept intact (traditionally when installed, the Shard takes over the body). The fembot had essentially became a surrogate parent, carrying a special package within; in which she was specifically tasked with protecting. As per Khes' orders; the fembot was to lay low for as long as possible while further repairing itself until it's aesthetics were restored to a socially passable degree. With access to a stash of credits, forged ownership credentials and a passport, the fembot was then able to book passage offworld to a remote location.

Over time, the cocoon designed by Khes was to relinquish control of the fembot's body over to her Shard offspring within, as the Shard came of age. Something else entirely happened instead. The personality of the fembot slowly merged with the personality of the growing Shard within forming a whole new and unique entity known as Tessla. Both the fembot's cpu matrix and the Shard think and act as one, with traits combined from both. Tessla was able to train in the ways of the Jedi, as per the knowledge donored into her databanks from her late mother. The time spent in seclusion was not wasted however; in addition to full Jedi training and lightsaber construction, Tessla made numerous other enhancements to her own body. At around the humanoid age of 25, Tessla deemed "she" was ready to enter the galaxy again.

Personality:
Tessla's demeanor is always warm, gentle and caring; with bright cheerful highlights you'd expect coming from a young woman of her age. Despite Tessla's youthful trendy appearance, she has a knack for being able to convey the experience and wisdom that'd normally be expected from an elderly veteran. Likewise, due to Tessla's unique development, Tessla is often mistaken for a real living person rather than a silicon/mechanically constructed hybrid (that is, when she chooses to appear fully human). Much credit to Tessla's namesake, she springs into action like a fully charged tessla coil when its called for.

Appearance:
Tessla's Human Replica Droid body is highly advanced from its original factory stock model. Tessla can appear as well as act human, indistinguishable from an actual human being. Her synthflesh and hair have chameleon like properties, allowing Tessla to modify her appearance at will. Often, Tessla will opt to make areas of her skin transparent like a designer trend, showing off the intricate meshwork of electronics under the skin. Occasionally, she'll quickly flash the black centers of her eyes a bright blue, either for amusement or to silently signal.

Technical Render Notes:
Tessla was created using 2 character models - a single victoria 4, as well as an internal robotic skeleton model. Her skin effects are not postworked, or multiple renders layered and skillfully combined & erased. Instead, the skin effects are all done in-house before the render process, painstakingly setup by hand in Carrara's Materials room. The skin shaders, I have figured out how to setup and apply multiple layers of skin textures and transparencies - 3 layers worh of skin (using full subsurface scattering) and electronics textures packs, and 3 layer sets worth of transparencies. Each layer is its own separate and individual skin texture set. Basically the first bottom layer is a separate V4 Cyborg skin package with its own transparency set. The middle layer is another Cyber-cyborg skin set with its own transparency set - essentially the red/blue/green/yellow/pink wires . The topmost and last layer is the victoria 4 Elite SSS Carrara skin pack, with another applied transparency set to show the 2 layers underneath. Once the effect was achieved on one body part, the entire process had to be manually recreated/setup for each and every body part material zone across the entire body. This took several evenings worth of trial and error. Underneath it all, if you look closely, parts of the robotic skeleton can still be seen, such as the glowing chest piece, parts of the jaw, the eye-glow, and other areas. I may at some time revisit this character, adding yet another layer or two, if possible.

This backdrop reminds me so much of Oblivion (the cheesy space western movie, not the immersive RPG video game). Not a bad thing!

Just googled the movie and found the trailer clip... looks like a fun movie :)

There's an old 1980's cartoon series called Bravestar, also a sci-fi western theme. So yeah, I guess that's where some of the influence comes from. Was thinking Tatooine but not the Mos Eisley feel... Suppose Ord Mantell works tho... Hmm...

I think the main reason it comes across as a space western backdrop rather than Mos Eisley is that it's very rectilinear. I've noticed the design of Mos Eisley is very chaotic - lots of curving streets, offset buildings, rounded edges and straight lines at odd angles. Nothing rectilinear.

I really don't have anything in my collection that really looks like Tatooine-esque type buildings, since 99.9% of the stuff I do have is either bought or legitly free for download pre-made content. Best substitute I was able to manage at the moment was to find and lineup a bunch of buildings and re-texture them to match with a similar sand / standstone / rock texture.

I'd probably have to glance at some screen stills and try my hand at actually modeling some. I do have the modeling software, and have been slowly teaching myself how to model. I think that'd actually be a fun project that I could also toss images up onto a blog for your guys feedback.

I did however, did model ALL the signs you see in the pic, all 4 of them for the various shops / venues / establishments.

Well, will have to see what I can do. Thankfully at least I didn't actually specific planet or city in Tessla's background for the current to date render, with the desert-like town...

But mostly, I'm commenting to say that I would LOVE to see you try your hand at some Tatooine-esque modeling (or, in fact, any thematic modeling).

I don't know any technical terms or techniques...and as such....I love the look. And the design on the outfit is kinda steampunky. Very cool

Thanks Tusserk! Yeah ok, I'll see what I can do then. Been a long time since i last did a project blog here.

Genius! An Iron Knight HRD! Why didn't I think of that!? Amazing artwork! You are very talented!