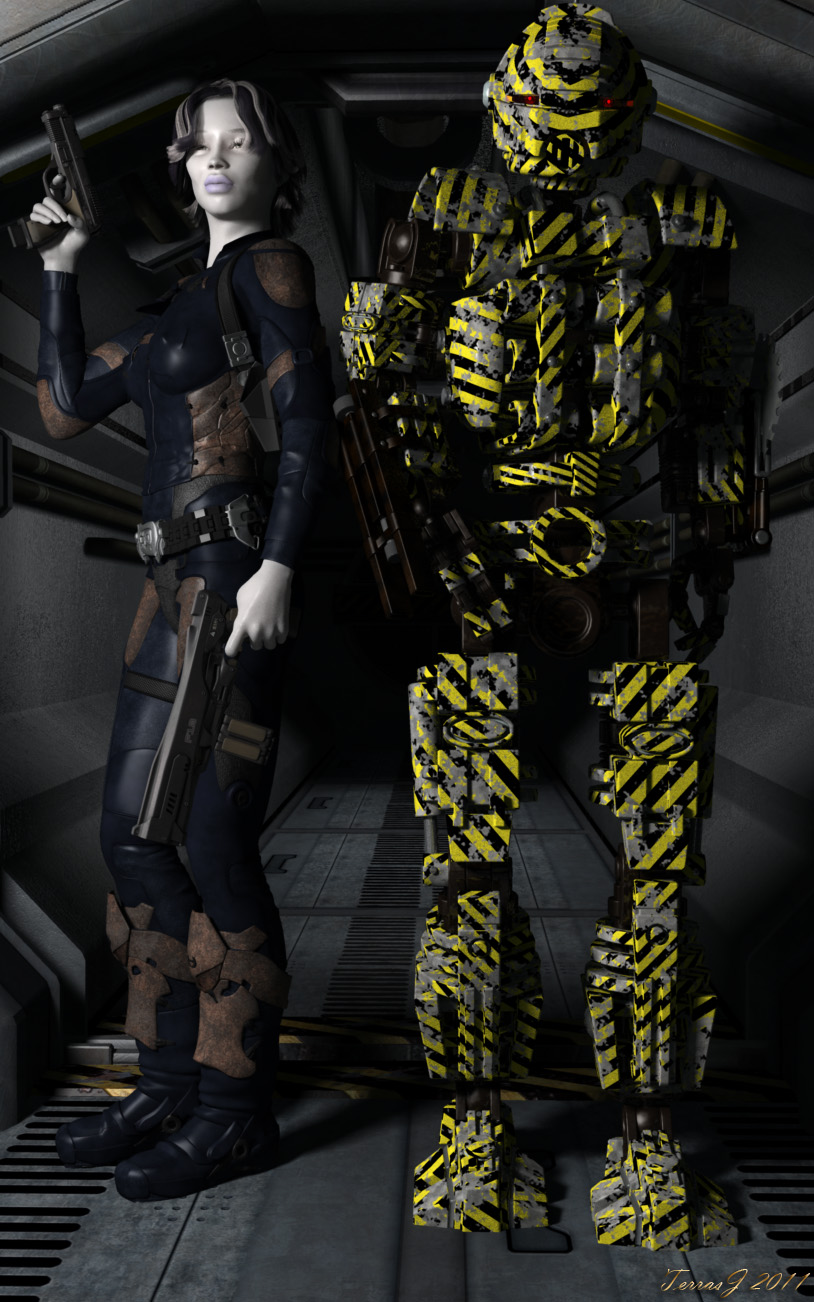 Whoa Jeeze! Its been exactly 1 full year and 1 day since I originally rendered this image... Then I never got around to submitting her, since I wanted to writeup a really good background story for her... Unfortunately, I never did get around to finishing her *complete* story...

So, here she is, with a very brief and summarized version of her story (imho, probably turned out better). Hence the question I was asking a while ago - to submit and post with or without a writeup/story.

So, without further adieu, I present: Operative Kimma and B1LL

Kimma's an operative for the Corouscant based "Agency". The "Agency" , is a top secret government sponsored program.

In very brief summary, in Kimma's youth, she's been a juvenile delinquent on her home planet Arkania. Her species - genetic offshoots of the Arkanian species (humans with white hair and white eyes), genetically engineered as laborer workforce while the indigent Arkanians lived the lavish posh life, focusing on scientific research careers and the luxury that it afforded them.

Kimma and the rest of her "Arkanian Offshoot" sub-species lived in the cold climate ruk-shack type colonies outside of the main cities. Kimma had a rebellious streak, often masquerading as a pureblood Arkanian, sneaking into the cities to enjoy the nightlife with some of her like-minded offshoot friends. While in her youth, a major incident went down in a nightclub one night resulting in some of her friends injured or killed, while Kimma alone managed to escape. Branded as a fugitive and outlaw, Kimma had no choice but to flee off planet, stowing aboard a freighter.

Kimma arrived on Coruscant, using her sneaking and thieving break & entry skills to survive. Until one fine day, while investigating one of the many lower level "seemingly abandoned" portions of the towering city's skyscrapers, Kimma got into way more than she bargained for. Snaking through old air shafts and turbolift tunnels, she unintentionally broke into what she was a forgotten armory cache. Minutes later, as she was giddy with hopes of great fortunes, a team of security operatives apprehended her.

Months later, Kimma was reformed and trained into Agent Kimma, the Agency putting her youth skills to good use as an insertion & advance scout expert. With the full staff support of the Agency, and the custom gear afforded to her, there's literally no building or room on the planet that Kimma can't get into.

Kimma's droid partner, B1LL (Bill), a centuries old Bipedal Load Lifter droid, was infact found by Kimma while on one of her off-duty recreational excursions through the city. The droid was found at the bottom of a long abandoned turbolift shaft. Its hardened thick housing still intact, despite being half buried under a pile of debris. Kimma had the droid dug out and activated - which led to the droid identifying Kimma as it's new master, to which will loyally serve. With only minor repairs and modifications, B1ll's a surprisingly fully functional and very capable operative droid. Perhaps most mysterious about the droid is its personality and mannerism. It refuses to shed any light on its past or previous owners, claiming the data's been corrupted, despite external diagnostics showing all systems are intact. When speaking, it always speaks in a peculiar form of statements or queries, such as: "Statement: This durrasteel door is highly corroded and beyond functional operation. Query: Would you like me to rip this rusting slab of metal off its hinges???"