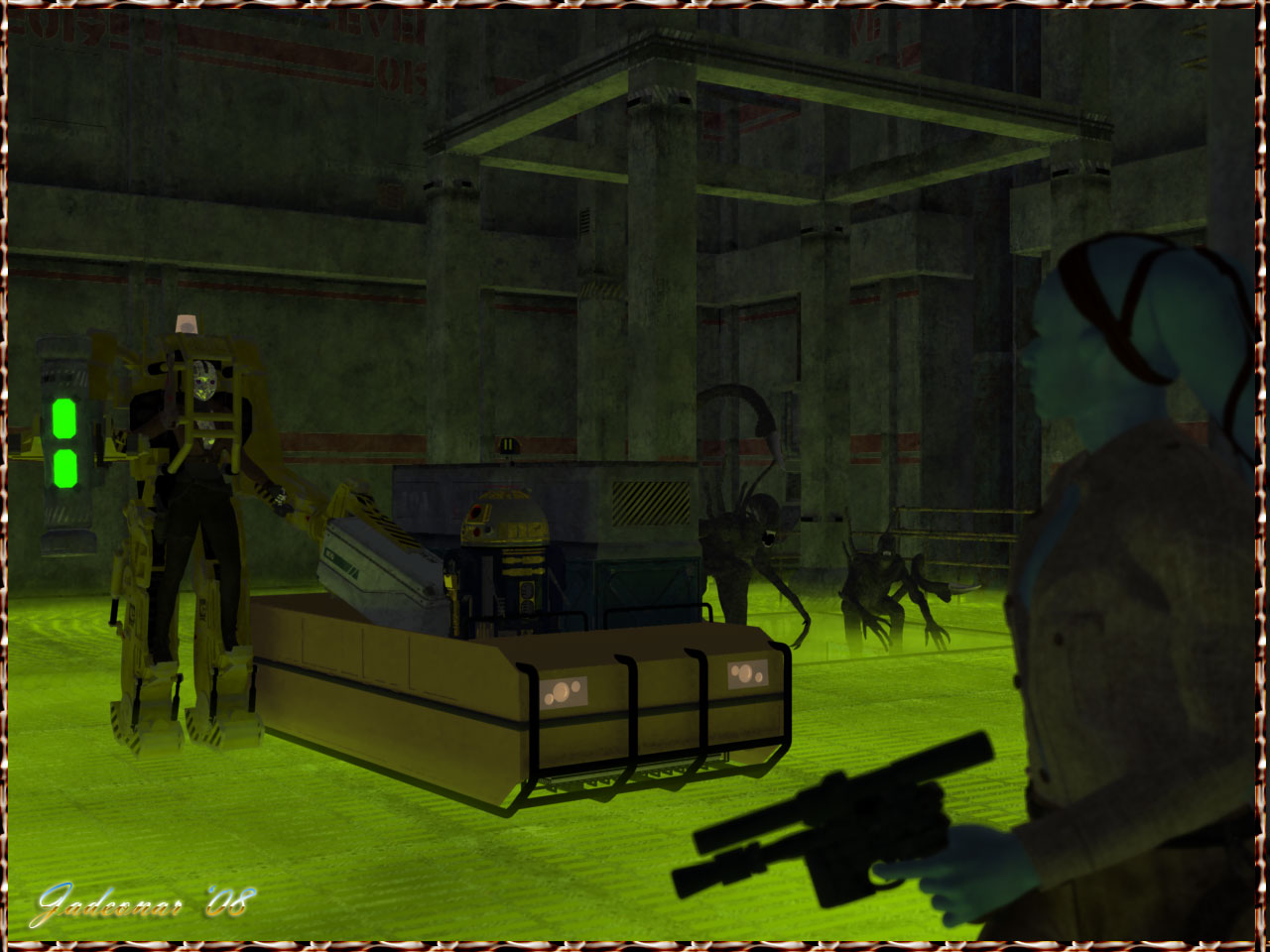 Hurry Up Lucy, we've got company!

Here's another oldie, from my first year of rendering. Not sure how this one didn't get submitted to SWAG. Yes, its a cross-over, and a classic favorite roleplaying one-shot at that.

Hurry Up Lucy, we've got company!

As the story went, I, Ind'yannev, my female android counterpart LU-C1 "Lucy", and our Astromech R2-M5 "Adventure for Hire" crew were contacted by some bigwig corporate official. I didn't bother to remember which company he represented. It was a lucrative offer, to retrieve some forgotten company cargo from an abandoned mining plant in some asteroid belt far out on the outer rim territory. Simple right? plot course in the Nav Computer, jump to lightspeed, and arrive 5 days later. Dock and pickup the cargo and blast home for paydirt.

Piece of 'Sweet Ryshcake' my arse. We arrived there, to find the place was evacuated in a hurry. Strange, environmental life support was still running, despite a bright emerald shade of heavy gas that covered the floors. It reeked worse than fresh bantha poodoo, and soup'ier than Dagobah swamp gas. And it had this strange bio-luminescent glow to it. The mining droids must've struck a vein of this stuff, whatever it is.

The mist-like goo made things slow going, it was like slogging through wet duracrete and it wasn't even knee deep! We eventually found a hover-sled and skimmed down through the lower levels. Eventually we reached the supply stores on Level 19, and it was just a matter of locating the goods. R2-M5 was unusually jumpy the whole time, he kept chirping on about some movement on his sensors, but nothing was to be seen - until it was too late. This 'thing' got the drop on us, dead silent, and nastier than an overgrown Mynock. We made short work of it with out blasters, before it got too close to us. And for good reason, whatever it had for blood, was eating through anything metal! And trust me, there's nothing worse than your android counterpart who's fussy about her gloss finish on a good day, now gone hysterical over any specs of acid blood that might've splashed. To make a long story short, she finally shut off her vocabulator at the prospect of drawing more of these creatures. Down the next bay, We came across a powerloader, in which Lucy comandeered in a nanocycle. Luck on our side, it wasn't long before we begun finding the crates by number to load up, scattered about as the crates were. We were just about done when R2-M5 begun spazzing out, at first I thought a drop of acid must've eaten through his behavioral circuits. But no, from the ramp going down to the next level, a series of hisses and scraping noises begun getting louder... A dark shape ad appeared to grow from the depths of the mist as it ascended the ramp, until its elongated black shelled head appeared forth. And there was another one coming behind it! As I positioned myself behind a stack of crates I switched on my comlink and whispered to Lucy "Hurry Up Lucy, we've got company!"

Is that Jason in the Exosuit??

That is an interesting concept Asok!

No, unfortunately its a droid piloting the exo-suit, and an r2 unit piloting the repulsor sled. Both droids belongs to the Twi'lek. I'll have to do up another render of all 3, which might actually be a good idea.

Aaahaha, keep meaning to comment on this and getting distracted gallery-browsing on the way! Now I'm finally here.

But I love it!! Seems like it would have been one heck of a fun session, I loved being able to read everything behind the piece. What a great concept, hah.

Great rendering, too, I love the atmosphere you've created-- and please do make up a piece of the group! I'd love to see it. :D

Heh, awesome! Reminds me of my own crossovers... Predators vs. Mandalorians vs. Zombies...